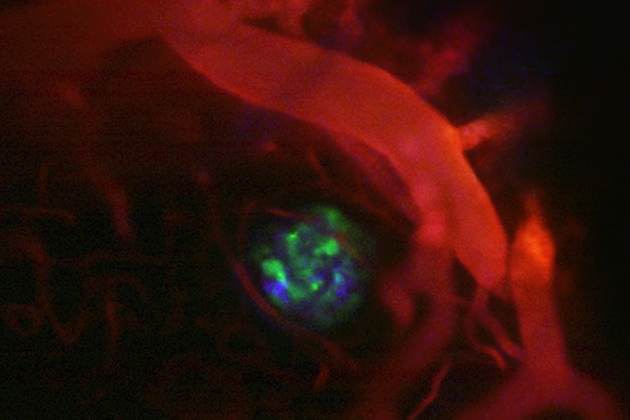 Glowing neurotransmitters (in blue and green) seen through a 'window' into a mouse's brain.

Neuroscientists have invented a way to watch the ebb and flow of the brain's chemical messengers in real time. They were able to see the surge of neurotransmitters as mice were conditioned — similarly to Pavlov's famous dogs — to salivate in response to a sound.

The study, presented at the American Chemical Society’s meeting in Philadelphia, Pennyslvania, on 22 August, uses a technique that could help to disentangle the complex language of neurotransmitters. Ultimately, it could lead to a better understanding of brain circuitry.

The brain’s electrical surges are easy to track. But detecting the chemicals that drive this activity — the neurotransmitters that travel between brain cells and lead them to fire — is much harder. “There’s a hidden signalling network in the brain, and we need tools to uncover it,” says Michael Strano, a chemical engineer at the Massachusetts Institute of Technology in Cambridge.

In many parts of the brain, neurotransmitters can exist at undetectably low levels. Typically, researchers monitor them by sucking fluid out from between neurons and analysing the contents in the lab. But that technique cannot measure activity in real time. Another option is to insert a metal probe into the space between neurons to measure how neurotransmitters react chemically when they touch metal. But the probe is unable to distinguish between structurally similar molecules, such as dopamine, which is involved in pleasure and reward, and noradrenaline which is involved in alertness.

Enter neuroscientist Paul Slesinger of the Icahn School of Medicine at Mount Sinai in New York City and neurophysicist David Kleinfeld of the University of California, San Diego. In May, they reported a method for making genetically modified human cells that produce artificial receptors for neurotransmitters. These receptors are also linked to fluorescent molecules so that when a particular neurotransmitter binds to its receptor, the cell lights up1.

The researchers injected these cells, known as CNiFERs (cell-based neurotransmitter fluorescent engineered reporters) into the brains of 13 mice. Then, they cut a window into each mouse’s skull to expose its brain and put a transparent cover over the hole so that they could watch the cells light up in real time through a microscope.

Over the course of five days, the researchers trained the mice by playing a sound before giving them a sugar treat. The mice soon learned to salivate in anticipation as soon as they heard the sound. Each day, the researchers recorded light from the animals’ brains, enabling them to determine the exact moment at which neurotransmitters were released. For the first time, they could see a surge of dopamine — the pleasure molecule that drives salivation — after the sound that occurred more rapidly as the association became stronger.

Noradrenaline, a molecule involved in alertness, is also thought to surge in this type of learning, but researchers have never been able to distinguish it from dopamine in real time. But by engineering CNiFERs specific to each neurotransmitter, Slesinger and Kleinfeld showed, also for the first time, that the noradrenaline spike occured at variable times following the tone and did not change with training. This suggests that the neurotransmitter could be responding to some other factor or behavioural reaction.

The ability to use separate CNiFERs for the two neurotransmitters might eventually reveal whether noradrenalin has a role in learning and addiction, and whether drugs that target it are likely to change behaviour.

Strano says that the technique is an improvement on current methods because it quantifies neurotransmitters directly instead of calculating them through their effects. “It’s one of the purest tests you can do,” he says.

But he worries that genetically modified cells might not act the same way as natural cells. His lab is working on a set of nanotubes that cross the blood–brain barrier and emit light when they encounter a neurotransmitter in the brain2.

But Lin Tian, a neuroscientist at the University of California, Davis, thinks that the technique is of limited use. The CNiFERs show whether the total amount of a molecule such as dopamine is increasing or decreasing, but they do not reveal which neuron is sending or receiving the signal — making it hard to map tangled brain circuits.

Instead, Tian and her colleagues are modifying bacterial proteins so that they bind neurotransmitters and emit light. This technique is precise enough to detect the signalling molecule glutamate in a single gap between two neurons, thus revealing the exact cells involved3.

Tian says that CNiFERs might be more useful for amino-acid-based neuropeptides, such as orexin, which is involved in sleep and drug-seeking behaviours. These larger molecules are more difficult to detect with chemical techniques. Slesinger says that he and his collaborators are working on CNiFERs for this and other neuropeptides.

All of the researchers are trying to expand the repertoire of neurotransmitters that can be detected. Kleinfeld says that CNiFERS are unlikely to be used in humans any time soon because implanting cells into the brain could be dangerous. But they might be used to detect whether drugs are working in mice, and they are sensitive enough to reveal, perhaps, more subtle ways in which the brain malfunctions.