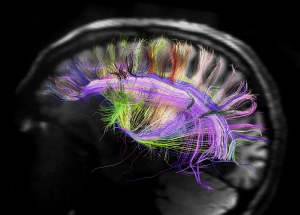 A regular grid of nerve fibres could aid learning and repair in the brain.

The nerves in a human brain form a three-dimensional grid of criss-crossing fibres, say researchers who have mapped them.

The regular pattern creates a scaffold to guide brain development and support more complex and variable brain structures, says Van Wedeen, a neuroscientist at the Massachusetts General Hospital in Boston. “The grid structure, by dint of its simplicity and symmetry under deformation, allows for continuous re-wiring,” he says.

The grid is part of the brain's white matter: bundles of nerve fibres, or axons, that allow different brain regions to communicate and coordinate with one another. It was a surprise to find that these bundles form a regular network, rather than a jumbled mass, says Wedeen.

The researchers imaged cubes of the brain a couple of millimetres across in living humans and half a millimetre across in dead animals from four other primate species. They used a technique called diffusion spectrum magnetic resonance imaging, which traces the path of axons by analysing the flow of water through the brain. The results are published in Science today1.

In all the species studied, bundles of axons crossed the brain in a regular pattern. On a small scale, they run at right angles to one another, from front to back, left to right and top to bottom. On a larger scale, they form curved, meshed sheets.

Wedeen thinks that chemical signals guide axon growth during brain development, creating grids that bend into place as the brain matures and folds. The structure's regularity may aid learning and recovery from injury, he says.

The orthogonal arrangement of nerve fibres in the brain has been noticed before, comments Pratik Mukherjee, a neuroscientist at the University of California, San Francisco. “The contribution of this paper is that they looked at it more comprehensively and systematically,” he says.

The grids were most regular in deep brain structures, including neural pathways involved in emotion and memory. Wedeen speculates that this pattern represents a bare-bones wiring plan, which becomes more branched and convoluted in the overlying cortex of higher primates, associated with complex behaviours such as language and fine motor skills.

On a large scale, the brain probably is organized like this, agrees David Van Essen, a neurobiologist at Washington University in St. Louis. However, he thinks that the analysis probably underestimates the number of axon bundles that run at oblique angles to the grid, and which are outside the grid altogether.

Irregular wiring is probably especially common near the grey matter at the brain's surface, where the tissue wrinkles and folds. “The story is on more solid ground the deeper [into the brain] you get,” says Van Essen.

David Kleinfeld, a neurophysicist at the University of California, San Diego, says that the findings are an exciting first step. But he adds that the researchers need to verify the grid-like architecture through tissue staining and three-dimensional reconstructions of small brain samples.

Owing to technical limitations, the study was able to resolve a grid-like structure in only about one-quarter of the human brain, mostly in deep brain structures. Wedeen is currently using more sensitive imaging techniques to search for grids in the more geometrically complex regions of the human cortex, as part of the US National Institutes of Health's Human Connectome Project, which aims to map all the brain's wiring and its relation to mental health.

Eventually, imaging the development of the white-matter network in children could provide insight into neurological conditions thought to involve miswiring, such as autism.

“The functional significance of this is an open question,” says Wedeen, “but I find it hard to believe that it doesn’t have an answer.”