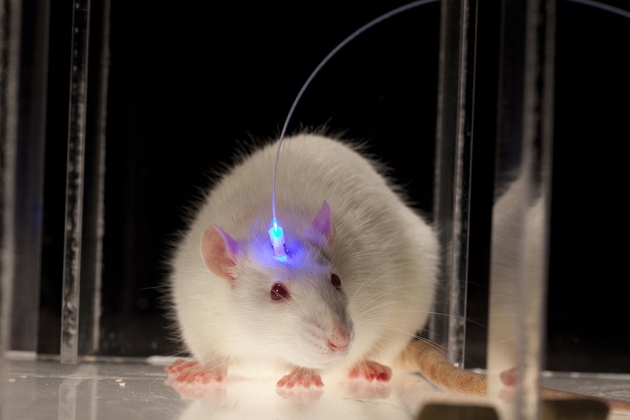 Manipulating brain circuits with light and drugs can cause ripple effects that could muddy experimental results.

In the tightly woven networks of the brain, tugging one neuronal thread can unravel numerous circuits. Because of that, the authors of a paper1 published in Nature on 9 December caution that techniques such as optogenetics — activating neurons with light to control brain circuits — and manipulation with drugs could lead researchers to jump to unwarranted conclusions.

In work with rats and zebra finches, neuroscientist Bence Ölveczky of Harvard University in Cambridge, Massachusetts, and his team found that stimulating one part of the brain to induce certain behaviours might cause other, unrelated parts to fire simultaneously, and so make it seem as if these circuits are also involved in the behaviour.

According to Ölveczky, the experiments suggest that although techniques such as optogenetics may show that a circuit can perform a function, they do not necessarily show that it normally performs that function. “I don’t want to say other studies have been wrong, but there is a danger to overinterpreting,” he says.

Ölveczky and his colleagues discovered these discrepancies by chance while studying rats that they had trained to press a lever in a certain pattern. They injected a drug called muscimol, which temporarily shuts off neurons, into a part of the motor cortex that is involved in paw movement. The animals were no longer able to perform the task, which might be taken as evidence that neurons in this brain region were necessary to its performance.

But Ölveczky accidentally damaged one animal’s motor cortex while injecting the drug. He decided to use a toxin to permanently destroy that portion of the brain to see whether such a lesion would have the same effects as the temporary disruption. When the researchers tested this rat ten days later, they were surprised to find that it could still press the lever correctly, despite having not performed the task since the damage occurred. The observation suggested that the damaged circuit was never actually involved in the behaviour in the first place; without practice, the brain cannot simply switch to using a different circuit. The researchers concluded that their muscimol experiment had shut down multiple circuits, some of which were involved in the lever-pressing behaviour.

The differences between the temporary and permanent manipulation held up when the researchers repeated the experiment with more rats. The team inserted light-sensitive proteins into the motor cortex, which fired when triggered with light, and found that this optogenetic manipulation also impaired the rats' performance in the lever task.

The researchers next turned to zebra finches, whose brains have already been well mapped because of the birds' ability to learn courtship songs early in life. Ölveczky and his colleagues used muscimol to temporarily shut off a brain region in birds called the nucleus interface (Nif). Nif itself is not needed for birdsong — birds can still sing if Nif is permanently destroyed — but it connects to neurons that are crucial to singing.

When the researchers temporarily inactivated Nif, the birds’ songs lost their structures and were ruined. Ölveczky suggests that regions of the brain are so intertwined that suddenly changing one region — such as Nif — sends ripples through the rest of the system, which affects behaviours that are not normally dependent on the region.

Richard Mooney, a neurobiologist at Duke University in Durham, North Carolina, who studies songbirds, is impressed that the phenomenon can be shown in multiple species. “I view it as a very important and timely piece,” he says. Given that many experiments build on existing knowledge about circuits involved in a behaviour, he cautions, experimental scientists should be particularly careful when using transient techniques to map entirely new circuits in the brain.

“This study nicely reminds us that there is no perfect technique,” says Evan Feinberg, a neuroscientist at the University of California, San Francisco.

Optogenetics pioneer Karl Deisseroth of Stanford University, California, says that he is not surprised that permanent and temporary manipulations cause different behavioural effects. Because the brain is a dynamic system and operates on different time scales, he says, any sort of manipulation may show only one piece of the picture2.