Most people in the United States are more worried than enthusiastic about the prospect of scientific advances such as gene editing and brain-chip implants, a survey of thousands suggests.

The Pew Research Center in Washington DC asked 4,726 US people about the potential uses of three biomedical technologies that it classified as ‘potential human enhancement’: gene editing to reduce disease risk in babies; brain implants to enhance concentration and brain processes, and transfusions of synthetic blood to improve strength and stamina. (None of these procedures are a reality, but the underlying technologies are being researched.) 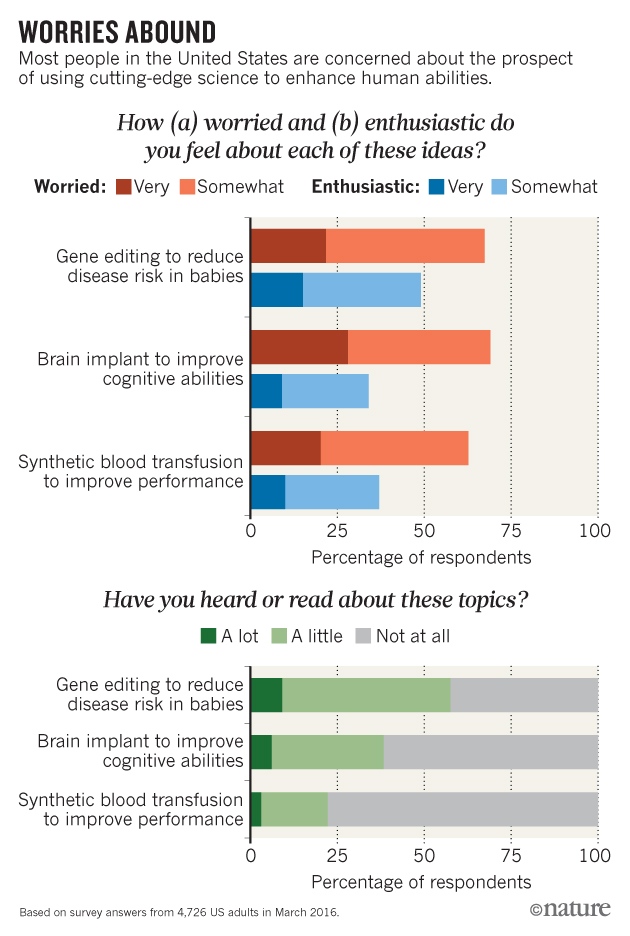 Those who took the survey were overwhelmingly wary about all of the ideas. In each case, more than 60% said that they would be worried about the technologies, and fewer than half expressed enthusiasm about them — with the prospect of brain implants prompting the most concern and least excitement.

More than 70% thought that the procedures would become available before they were well understood or officially deemed safe. Around one-third thought the technologies were morally unacceptable, and about 70% were concerned that such enhancements would widen social divides — for instance, because initially only wealthy people would be able to afford them.

Respondents were not generally familiar with these ideas for enhancement: only 38% had heard about the topic of brain implants, and just 22% had heard of the concept of synthetic blood. Gene editing was more familiar: 57% had heard or read about it.