Deep depression that fails to respond to any other form of therapy can be moderated or reversed by stimulation of areas deep inside the brain. Now the first placebo-controlled study of this procedure shows that these responses can be maintained in the long term1.

Neurologist Helen Mayberg at Emory University in Atlanta, Georgia, followed ten patients with major depressive disorder and seven with bipolar disorder, or manic depression, after an electrode device was implanted in the subcallosal cingulate white matter of their brains and the area continuously stimulated. 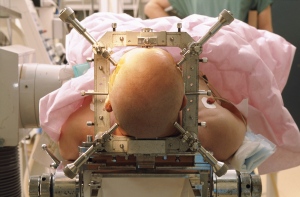 All but one of twelve patients who reached the two-year point in the study had completely shed their depression or had only mild symptoms.

For psychiatrists accustomed to seeing severely depressed patients fail to respond — or fail to maintain a response — to antidepressant or cognitive therapy, these results seem near miraculous.

DBS is hardly a quick fix for depression though. Not only does it involve invasive brain surgery, but recovery is usually slow. “In our study we found that many patients didn’t get well at all in the first months — but then they started to respond after a year or more of stimulation,” says Mayberg. It’s also not a cure, she notes, as patients quickly reverted to full-blown depression if stimulation of their electrodes was discontinued.

“We were particularly happy to see that bipolar patients responded as well as unipolar patients because bipolar disorder is notoriously hard to treat,” she says. Nearly all studies of DBS in depression so far have involved patients with major depressive disorder.

It’s hard to design proper placebo-controlled clinical studies for DBS, because sham surgery is not ethically acceptable. But in Mayberg’s study, the patients were told that immediately after surgery they would be randomly assigned to two treatment groups, one receiving immediate stimulation, and the other receiving stimulation only after four weeks. In fact none of them was stimulated during this period. The patients showed no significant placebo effect.

Placebo-controlled phase-3 clinical trials involving hundreds of patients are being carried out at multiple centres in North America and Europe by two electrode manufacturers, but those results won’t come out for several years.

In the meantime, academic studies such as Mayberg’s will establish the necessary fine-tuning of procedures. “One of the huge breakthroughs of the past decade has been the understanding that depression is a disease of brain networks,” says Schlaepfer. DBS involves stimulating an underperforming network running between different brain areas, he says, and both the subcallosal cingulate and the nucleus accumbens are part of the same network. “But we are still searching for the optimal target in the network, one that may help make recovery faster.”