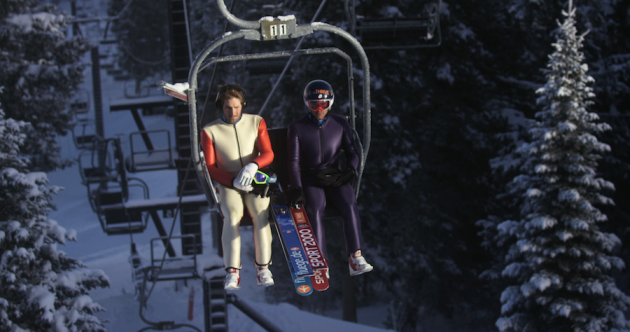 The skier at left is testing a brain-stimulation device to see if it improves athletic performance.

Elite ski jumpers rely on extreme balance and power to descend the steep slopes that allow them to reach up to 100 kilometres per hour. But the US Ski and Snowboard Association (USSA) is seeking to give its elite athletes an edge by training a different muscle: the mind.

Working with Halo Neuroscience in San Francisco, California, the sports group is testing whether stimulating the brain with electricity can improve the performance of ski jumpers by making it easier for them to hone their skills. Other research suggests that targeted brain stimulation can reduce an athlete’s ability to perceive fatigue1. Such technologies could aid recovery from injury or let athletes try 'brain doping' to gain a competitive advantage.

Yet many scientists question whether brain stimulation is as effective as its proponents claim, pointing out that studies have looked at only small groups of people. “They’re cool findings, but who knows what they mean,” says cognitive psychologist Jared Horvath at the University of Melbourne in Australia.

The USSA is working with Halo to judge the efficacy of a device that delivers electricity to the motor cortex, an area of the brain that controls physical skills. The company claims that the stimulation helps the brain to build new connections as it learns a skill. It tested its device in an unpublished study of seven elite Nordic ski jumpers, including Olympic athletes.

Four times per week, for two weeks, the skiers practised jumping onto an unstable platform. Four athletes received transcranial direct-current stimulation (tDCS) as they trained; the other three received a sham procedure. The stimulation ultimately improved the athletes' jumping force by 70% and their coordination by 80%, compared with the sham group, Halo announced in February.

Troy Taylor, high-performance director for the USSA, is encouraged by the results — but concedes that they are preliminary.

Pushing the limits of endurance

Another study, presented on 7 March at the Biomedical Basis of Elite Performance meeting in Nottingham, UK, suggests that tDCS may reduce the perception of fatigue. Sports scientist Lex Mauger of the University of Kent in Canterbury, UK, and his colleagues found that stimulating the motor-cortex region that controls leg function allows cyclists to pedal longer without feeling tired.

The researchers stimulated the brains of 12 untrained volunteers before directing the athletes to pedal stationary bicycles until they were exhausted. Every minute, they asked the cyclists to rate their level of effort.

Volunteers who received tDCS were able to pedal two minutes longer, on average, than were those who were given a sham treatment. They also rated themselves as less tired. But there was no difference in heart rate or the lactate level in the muscles between the treatment and control groups. This suggests that changes in brain perception, rather than muscle pain or other body feedback, drove the improved performance.

Alexandre Okano, a biological engineer at Federal University of Rio Grande do Norte in Brazil, found similar increases in cyclists’ performance when he stimulated the brain’s temporal cortex, which is involved in body awareness and in automatic functions such as breathing2. This suggests that the temporal and motor cortices are connected in ways that are not understood, or that tDCS does not target locations in the brain precisely, Okano says.

These results support the notion that the brain manages exertion by collating feedback from the body and then slowing muscles to prevent fatigue, says Dylan Edwards, a neurophysiologist at Burke Medical Research Institute in White Plains, New York3. “Even when you think you’re exercising as hard as you can, there is always some reserve of ability,” he says.

But Horvath cautions that little is known about the long-term effects of stimulating the brain. And others are sceptical of the technique’s potential to increase performance. Vincent Walsh, a neuroscientist at University College London, notes that the methods used in tDCS studies often differ between research groups — and might not always be optimized.

For instance, the fairly intense amount of electricity that Mauger's team used has been shown to sometimes have complex and unintended effects on the brain's activity4.

Replicating such experiments is difficult because of variations in how people respond to brain stimulation. Some people do not respond at all; others might respond only when stimulated in a certain way. And even an individual’s response can differ from day to day. Edwards says that it is important to map these differences if tDCS is to be used therapeutically or for other purposes. “We’re moving toward customized prescription of brain stimulation,” he says.

Nonetheless, the use of tDCS in sports is only likely to increase. Stimulating the motor cortex, for instance, seems to increase dexterity, so videogamers have been quick to take up the technique. And it is increasingly easy to acquire stimulation devices; Halo has begun to market its equipment for the express purpose of increasing athletic performance.

Taylor compares the use of brain stimulation by athletes to eating carbohydrates ahead of an athletic event, in the hopes of boosting endurance. “It piggybacks on the ability to learn,” he says. “It's not introducing something artificial into the body.”

But Edwards worries that the availability of tDCS devices will tempt athletes to try “brain doping”, in part because there is no way to detect its use. “If this is real,” he says, “then absolutely the Olympics should be concerned about it.”