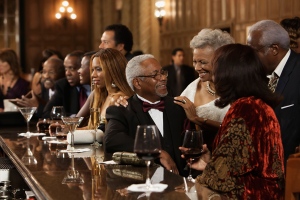 Human brains are able to focus in on one conversation in the hubub of a crowded room by discarding the background noise.

When a listener tunes in to one voice and ignores another, his or her brain discards the information coming from the superfluous speaker, researchers have found.

The findings, from a study using electrodes implanted into human brains, could help scientists to design better hearing aids and cochlear implants, and to understand how the process breaks down in ageing or degenerative disorders such as Alzheimer’s disease. The report is published in Nature1.

Psychologists call our ability to pick one voice out of a hubbub the ‘cocktail party effect’. But how the auditory system makes sense of speech in confusing conditions hasn’t been clear. “That’s one of the remarkable things that humans can do naturally,” says neuroscientist Edward Chang at the University of California, San Francisco, who led the study.

Speech is too quick to be tracked by methods that scan the brain from the outside, such as fMRI (functional magnetic resonance imaging). So Chang and his colleague Nima Mesgarani worked with two volunteers who already had electrodes implanted in their brains for monitoring epileptic seizures before surgery.

The Nature podcast team discusses the research, and tries out a version of the experiment.

The electrodes allowed the research duo to measure brain activity in the auditory cortex as the subjects listened to two voices emerging simultaneously from a single loudspeaker.

The volunteers had to report on what one voice was saying and ignore the other.

When the subjects successfully focused their attention, their brain activity showed that they were processing only that voice. It was “as if the other one was not even heard”, says Chang.

When listeners failed to pick a voice out of the mix, their brain activity was smudged and unfocused. When they attended to the wrong voice, the data showed a clean representation of that voice.

The finding fits with a growing body of evidence that sound is processed as soon as it enters the brain. “The early areas of the cortex don’t just represent a stimulus, but what the subject does with it,” says Andrew King, an auditory neuroscientist at the University of Oxford, UK.

King would like to see the experiment run in more realistic surroundings, with voices coming from different directions. “It would be interesting to do the same study by presenting two sources, one to each ear, or from different locations in space,” says King.

It would also be intriguing, he says, to see how the brains of hearing-impaired people direct their attention when handling multiple voices.