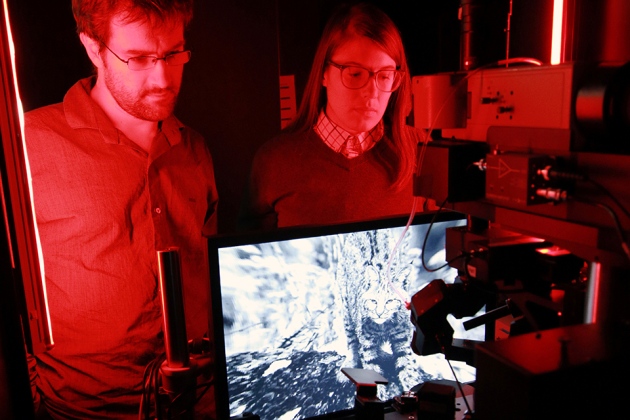 Researchers monitored mice’s brain activity while the animals viewed images such as this cat.

Inspired by the large-scale sky surveys with which astronomers explore the cosmos, neuroscientists in Seattle, Washington, have spent four years systematically surveying the neural activity of the mouse visual cortex. The Allen Brain Observatory’s first data release, on 13 July, provides a publicly accessible data set of unprecedented size and scope, designed to help scientists to model and understand the human brain.

The project is part of an ambitious ten-year brain-research plan announced in 2012 by the Allen Institute for Brain Science. Designed to catalogue neurons and their electrical characteristics in minute detail, the initiative aims to enable new insights into how perception and cognition arise.

To compile the brain observatory’s first data set, researchers used a specialized microscope to record calcium waves that occur when neurons fire, sampling activity in 25 mice over 360 experimental sessions, while the animals viewed a battery of visual stimuli such as moving patterns of lines, images of natural scenes and short movies. The data set so far includes 18,000 cells in 4 areas of the visual cortex, making it one of the largest and most comprehensive of its kind. The set also includes information about each neuron’s location and its expression of certain genetic markers. At 30 terabytes, the raw data are too large to share easily, but users can download a more manageable processed data set, or explore it online.

“It’s amazing,” says Anne Churchland, a neuro­scientist at Cold Spring Harbor Laboratory in New York. “There’s no other effort I know of where people have looked at so many brain areas with so many stimuli — and importantly, where the data are freely available as well.”

Other labs have collected similar data, but on a much smaller scale, with fewer animals or fewer neurons. This information has been difficult to merge and compare, as a result of differences in the species, techniques or brain regions examined. And most data remain in the hands of individual labs.

To create the unusually extensive Allen data set, more than 100 researchers developed and used standardized equipment and protocols for every stage of the experiment. This allowed them to repeatedly and systematically sample the same populations of neurons across many animals and sessions.

Now, Allen Institute researchers plan to monitor activity while the mice carry out behavioural tasks. The scientists also want to use more recording techniques, and to extend their sampling across the entire mouse visual cortex and beyond. Christof Koch, president of the Allen Institute, hopes that over the next 3–4 years, the project will evolve into a true observatory, with researchers able to request certain experiments — the results of which will be made publicly available.

The project’s neural-activity map could help to fill out a picture of what cell types live in the brain and how they work together. Ultimately, the Allen Institute wants its own researchers and others to be able to use the massive data set to help to uncover the fundamental computational principles that underlie cognition. This lofty goal is shared by the US government’s Brain Research through Advancing Innovative Neurotechnologies (BRAIN) Initiative, which was launched in 2013 with the Allen Institute among its private partners. But whereas the BRAIN Initiative has largely supported individuals and small groups of investigators with conventional grants, the Allen Institute has concentrated personnel and money on a small number of large projects. It aims to create public research tools that would be unfeasible for individual labs to produce.

Armed with a sweeping survey of neural activity, Koch says, theoreticians will be able to design more accurate models of brain function, and find better ways to test the validity of existing models. But he is also realistic about the challenges ahead. “We’re under no illusions that now we have all this data that the solution will jump out at us,” says Koch.

The Allen Brain Observatory’s impact will depend in part on whether the neuroscience field embraces this experiment in communal research. Early reactions suggest that researchers are eager to participate. Churchland says that the in-depth information about how different visual areas respond to stimuli could help to guide and fine-tune her experiments. The data could also help labs that lack access to highly specialized imaging equipment, she adds.

Theoreticians, too, are looking forward to delving into the data. “This is basically a bonanza,” says computational neuroscientist Steven Zucker at Yale University in New Haven, Connecticut. “It’s as if somebody opened the door into the world’s biggest neuroscience lab for theoreticians around the world and said, ‘Come on in and play with our data.’”