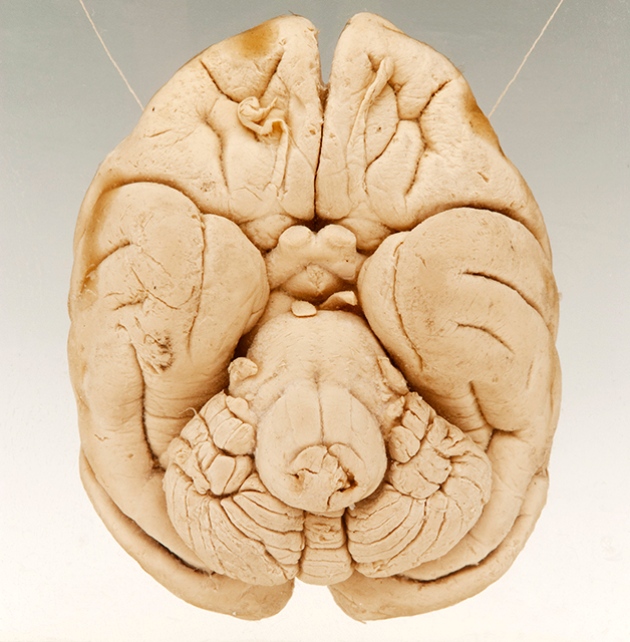 The brains of macaque monkeys do not integrate abstract information in the same way as human brains.

Neuroscientists have identified an area of the brain that might give the human mind its unique abilities, including language. The area lit up in human, but not monkey, brains when they were presented with different types of abstract information.

The idea that integrating abstract information drives many of the human brain's unique abilities has been around for decades. But a paper published1 in Current Biology, which directly compares activity in human and macaque monkey brains as they listen to simple auditory patterns, provides the first physical evidence that a specific area for such integration may exist in humans. Other studies that compare monkeys and humans have revealed differences in the brain’s anatomy, for example, but not differences that could explain where humans’ abstract abilities come from, say neuroscientists.

“This gives us a powerful clue about what is special about our minds,” says psychologist Gary Marcus at New York University. “Nothing is more important than understanding how we got to be how we are.”

A team of researchers headed by Stanislas Dehaene at the INSERM Cognitive Neuroimaging Unit at Gif-sur-Yvette near Paris, looked at changing patterns of activation in the brain as untrained monkeys and human adults listened to a simple sequence of tones, for example three identical tones followed by a different tone (like the famous four-note opening of Beethoven’s fifth symphony: da-da-da-DAH).

The researchers played several different sequences with this structure — known as AAAB — and other sequences to the subjects while they lay in a functional magnetic resonance imaging (fMRI) scanner. The fMRI technique picks up changes in blood flow in the brain that correlate with regional brain activity.

In both monkeys and humans, an area of the brain, part of which has been associated with numbers, lit up in the fMRI scanner when the subjects identified a change in the number of tones. Both species also registered the repetition pattern in specific brain areas, which are known to be equivalent in humans and monkeys. But only the human brains showed a unique response to the combined changes in number and sequence, in the form of intense activation in an additional brain area called the inferior frontal gyrus.

“It is like the monkey recognizes a pattern but does not realize it is interesting and take it no further — only humans take it on to the next level of analysis,” says Marcus.

But abstract information integration may be significant beyond language. “We had expected that humans have brain areas that put together information,” says cognitive biologist Tecumseh Fitch from the University of Vienna.“This type of computation may turn out to be also relevant to other characteristics that make humans unique, like music appreciation.”