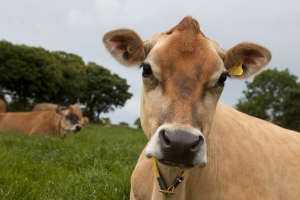 Cows infected with both bovine tuberculosis and a common liver fluke may not test positive on standard TB tests.

Bovine tuberculosis (bTB) could be spreading across Britain because the most widely used test for the disease is ineffective when cattle are infected with a common liver parasite.

The liver fluke Fasciola hepatica was already known to affect the standard skin test for bTB, but it was unclear whether the fluke stopped the disease developing or merely hid the symptoms. A study published today in Nature Communications suggests that the latter is more likely, and that the effect is significant. It estimates that around a third of bTB cases in England and Wales are undiagnosed because the test is less sensitive in cattle infected with the fluke1.

Researchers tested milk from dairy herds across England and Wales for antibodies against F. hepatica, an indication of infection, and added the data to an existing model of bTB transmission. If they assumed that a fluke infection inhibited bTB detection, they achieved a closer match between the model and actual bTB detection rates. The authors suggest that the fluke may alter the production by T lymphocytes — key cells in the immune system — of the protein interferon-γ, which is crucial to a genuine result in both the skin test and the second most common test for bTB, the interferon-γ release assay (IGRA) blood test.

Diana Williams, an infectious disease specialist at the University of Liverpool, UK, and an author of the paper, says the result helps explain why bTB is still endemic across England and Wales. “Everyone is aware that current methods aren’t detecting early enough or with enough sensitivity,” she says. “We need to look at better control of fluke.”

But the Department for Environment, Food and Rural Affairs, which is responsible for bTB control in Britain, questions whether the liver fluke hides infections. “Cattle carcasses are inspected in abattoirs and we would see evidence of TB in the slaughtered animals if this was the case,” a spokesperson said in a statement. The authors of the Nature Communications study hypothesize that cows display fewer symptoms because the fluke alters their immune response. A 2007 study supports this interpretation, showing that animals with preexisting tuberculosis had reduced sensitivity to the skin test when they were infected with liver fluke2.

The United States, Canada and Australia have eradicated bTB, but Britain and Ireland have struggled to control it. The disease costs the UK government around £100 million (US$158 million) a year. Control relies on testing cattle for bTB before they are moved between farms; animals that test positive are destroyed and the herd is retested. But the strategy isn’t working. Cases have increased over the past 25 years and new infection sites crop up long distances from existing hotspots.

Eradicating liver fluke could increase the sensitivity of the skin test and allow better control of infected cattle, but this poses its own difficulties. Farmers can keep cattle away from damp fields that are home to the fluke’s snail host, but treating infected dairy cattle is complicated. In 2010 the European Union (EU) banned most flukocide drugs because they leave toxic residues in milk. The milk from cows that receive the remaining two allowed drugs is undrinkable for three days after treatment.

Badgers have been blamed for spreading bTB between farms, and after a fraught debate the UK government last year announced a badger cull in England. (The Welsh government backed out of the trial last month.) David Williams, chairman of the UK charity, the Badger Trust, believes the decision to cull should be reassessed in light of the new research. “The unreliability allows disease to remain undetected, and badgers are blamed when [infected cows] are found later,” he says. “We have frequently queried the accuracy of testing, only to be told it is acceptable by EU standards and is the best test available.”

Although more experiments are needed to confirm the precise interaction between flukes and the skin test, Dirk Werling, an immunologist  at the Royal Veterinary College in Hatfield says there could be implications beyond cattle. Human liver flukes are rife in tropical and sub-tropical regions, and bTB causes 10% of human tuberculosis deaths in Africa.

“We know that a similar immune mechanism exists in humans,” he says. “The potential consequences of these observations could potentially be quite severe, not only for the farm animals, but also for people in third-world countries.”

Liver fluke could also explain epidemiological mysteries, such as why bTB has never gained a foothold in north-west England. “Our knowledge has holes in it,” says William Wint, an ecologist at the University of Oxford, UK, who has become frustrated by the badger-centric debate. “If this can make people look more at epidemiology than politics, that would be marvellous.”