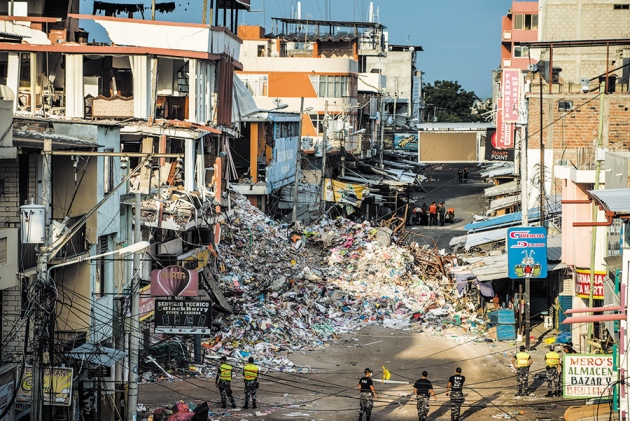 The central shopping area of Manta, a city in Ecuador, was destroyed by a strong earthquake in April.

It is fitting that the United Nations Habitat III conference in October will be held in Quito, Ecuador. In April, the city and nearby Portoviejo and Manta suffered an earthquake that killed more than 660 people and injured at least 10,000. Around 73,000 people were displaced. Some 700,000 needed emergency assistance, such as drinking water, sanitation and hygiene kits. Many water-supply systems and hospitals were destroyed or disrupted. Insurance companies estimated the damage at US$2.5 billion, of which only 16% was insured. Three months after the quake, 11,000 people still lacked basic services.

Such devastation highlights how susceptible many cities are to natural hazards, from flooding to drought, heat, storms, earthquakes, tsunamis and landslides. To minimize suffering, cities need to be able to anticipate, absorb, recover and learn quickly from adverse events.

At Habitat III, around 170 countries will adopt the UN's New Urban Agenda, which calls on governments to make cities more inclusive, sustainable and resilient. The declaration is not legally binding, but signatories will commit to global standards for sustainable urban development. These include promoting social cohesion (especially in times of mass migration towards cities), preserving natural resources and reducing disaster risk through planning that involves multiple sectors and is environmentally sound.

The agenda's analysis of the global challenges facing cities — such as increasing inequalities, migration, environmental degradation, risks from disasters and climate change — is solid. And its promotion of good governance, equality and poverty reduction is forward-looking. But it lacks specific priorities for action.

In our view, the central focus of Habitat III should be on small and medium-sized cities that are vulnerable and fast-growing, especially in Africa and Asia. That is to say, cities with populations between 300,000 and 500,000, or between 500,000 and 5 million. Examples include Kampala1 in Uganda, Niamey in Niger and Chittagong in Bangladesh; these are especially vulnerable to natural hazards. They have high relative rates of population growth and poverty, and their infrastructure and governance are often poor.

Targets need to be set and global funding sought for improving planning, infrastructure, data collection, governance and disaster-preparedness. This will require a refocusing of urban risk research and policies away from large and 'megacities' — those with more than 10 million inhabitants. 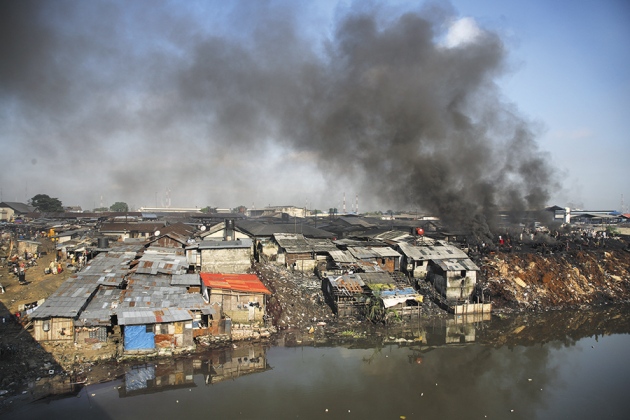 Port Harcourt is a fast-growing, hazard-prone city in southern Nigeria.

Megacities have long been seen as hotspots of risk from natural hazards because they are places where people, assets and political power concentrate2, 3. Insurance studies equate risk with city size and hazard exposure. Megacities such as Jakarta or Dhaka have more industries at stake and might be more likely to suffer floods and droughts than medium cities such as Lilongwe in Malawi or Dar es Salaam in Tanzania (see www.futureproofingcities.com). These studies account for a few aspects of preparedness, such as construction quality. But they do not factor in sufficiently the different capabilities of communities and cities to deal with extreme events.

In fact, the speed of urban population growth matters more than city size when it comes to how susceptible people are to an adverse event4. Unplanned development soon overwhelms local administrative capacities. Informal settlements and slums often grow in hazard-prone areas, such as those susceptible to flooding, as evidenced in Port Harcourt in Nigeria or Ouagadougou in Burkina Faso. New immigrants tend to be poorer and less educated than existing residents and live in more precarious housing conditions.

The cities that are growing fastest are the small and medium-sized, and there are many of them. Overall, populations here are projected to rise by more than 32% between 2015 and 2030 — that's 469 million more people. Large and megacities are predicted to grow by 26% (203 million people). For example, just under half of the 100 million new urban residents expected in India by 2030 will be in mid-sized cities such as Agartala, Imphal, Tiruppur and Tirupati. One-quarter will add to the nation's four megacities — Delhi, Mumbai, Kolkata and Bangalore.

The vulnerabilities of small and medium-sized cities are being underestimated compared to those of megacities for four reasons: limited data, political power, personnel and resources. It is not known exactly how many people live in hazard-prone urban areas. Knowledge of past and future impacts of extreme events (such as deaths, economic losses and livelihood disruptions) for different city sizes is limited, particularly in developing countries5.

Natural hazards strike independent of income. For example, similar proportions (11–15%) of urban populations in the Philippines, Japan and the Netherlands are highly exposed to sea-level rise, droughts, floods, earthquakes or storms (see Supplementary Information). But only rich countries can afford to defend themselves against such risks. The Maeslant Barrier, which protects the Dutch city of Rotterdam from storm surges with 240-metre steel arms, cost $500 million; the 2016–17 national budget of Uganda is about $8 billion.

In the developing world, poor infrastructure and planning exacerbate disruptions when extreme events hit6. Poor governance, uneven public investments, lack of basic environmental and social data, and corruption hamper cities' ability to function. Standards for earthquake- or flood-resistant constructions of public buildings such as schools are often bypassed. Many groups, such as poor migrants, are often marginalized. Such problems are holding back the development of water supply and treatment infrastructures in small and medium Ugandan cities, for example.

Most cities address urbanization, disaster risk and climate change through separate departments and processes. In small and medium cities, institutional capacities and human resources are spread thin. Poor coordination between city agencies and infrastructure programmes results in clashes and misuse of scarce resources. In Uganda, newly installed water pipes, sewerage networks and communications cables often do not meet local demand and are built in a haphazard manner without meaningful coordination across agencies.

Size affects how cities respond to economic shocks. For example, small and medium cities throughout the US midwest, such as Detroit in Michigan, lost thousands of manufacturing and industrial jobs during the economic crisis of the late 2000s. Lacking industrial diversity, they are less able than larger cities to attract new employment opportunities by taking advantage of new and growing economic sectors through national policies or international trade agreements. And they lack investment capital to retrofit older manufacturing systems.

Clearly, strengthening the resilience of small and mid-sized cities offers opportunities. Smaller cities are easier to manage than megacities7. Risk reduction and climate-change strategies embedded now can expand as cities grow. Adverse impacts of extreme events, such as traffic interruptions and closed businesses, and the benefit of reducing these, through improved drainage or flood management, are felt more directly. And coordination between different groups is more feasible in small cities.

To assess which countries have the highest urban vulnerability to natural hazards we analysed the urban populations of 140 countries. We looked at around 1,600 cities with populations of more than 300,000 (see 'Urban vulnerability'). Based on a standard methodology8, we used UN and World Bank data on urban populations, infrastructure and socio-economic indicators. In the absence of local data, we used representative national data on insurance coverage, medical services and governance conditions. 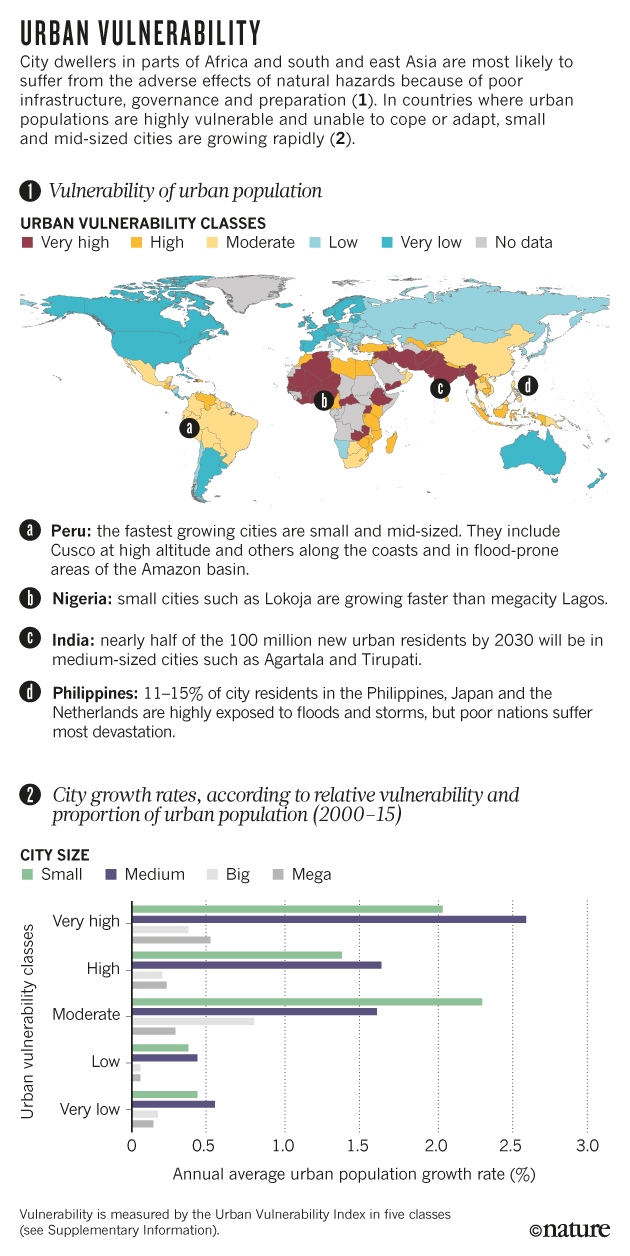 Countries with the most vulnerable urban populations include many in Africa (Burkina Faso, Mali and Uganda), parts of Asia (Afghanistan and Yemen) and Haiti in the Caribbean. India and Bangladesh also rank highly. Several factors put city development in these countries at a tipping point.

These nations have extremely high rates of urban growth. Between 2000 and 2015, the average such growth for the ten nations with the highest urban vulnerability was about 4% per year, or twice that of Indian cities (see Supplementary Information). Urban and regional planning is falling behind.

This pressure will be increased by rural–urban migration trends. In Ethiopia, Niger and Uganda, one-fifth of the population currently lives in cities, compared with more than half in Nigeria, where conflict has driven rural people into cities.

The intensification of hazards influenced by climate change (sea-level rise, droughts, heavy rain and heat stress) will aggravate difficulties9. If flooding levels, for instance, exceed a certain frequency or magnitude, the sustainability of many small and mid-sized cities may be threatened substantially.

Targets and priorities are needed for future actions and investment. A new way of grouping countries and cities according to urban size, vulnerability and growth is required (beyond the country classes of 'least developed', 'low income', 'middle income' and 'high income'). Benchmarks for strengthening urban resilience and adaptation should be set by the international community, regional organizations (such as the Association of Southeast Asian Nations, the African Union and the European Union), national governments, cities and local communities or city networks.

International and country-specific goals should be defined for highly vulnerable nations across Africa and Asia. These goals need to address conditions of state fragility (such as human rights and corruption) as well as local resilience gaps. City networks and international or regional organizations should help to identify, promote and monitor such goals and ensure transparency. The heightened need of proportional funding for small and medium cities must be embedded into the text of the UN's New Urban Agenda, as small island nations have in similar forums.

Funding regimes — national revenues, donor programme or municipal bonds — for different classes of cities and countries should be established according to the level of urban vulnerability and the speed of urban growth. The proportion allocated to risk management in small and mid-sized cities must grow. It is essential that investments go beyond improving technical infrastructures and physical assets (such as housing); also crucial is developing human resources and strong institutions10.

Improved monitoring of hazards, human susceptibilities and coping and adaptation processes by municipalities, cities and civil-society groups is also required. Monitoring by citizens would complement official government and international data and engage different groups. Finally, more emphasis should be given to understanding how national and local governance influence resilience at the community level in urban areas.

Strengthening the resilience of vulnerable small and medium-sized cities is where the success or failure of the UN's New Urban Agenda will be decided.