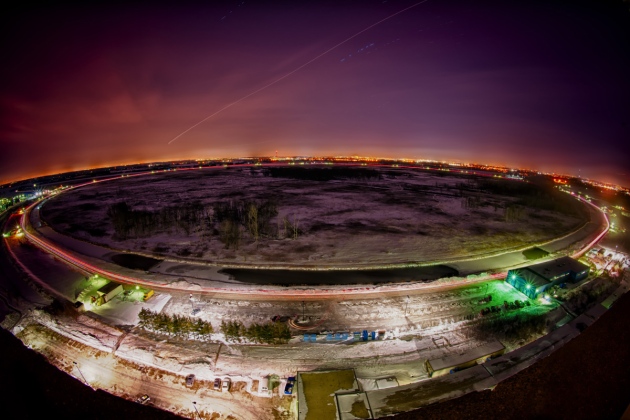 Before it was shut down last year, the Tevatron particle accelerator gathered data that support the existence of the elusive Higgs boson.

A hint of the Higgs boson, the missing piece in the standard model of particle physics, has been found in data collected by the Tevatron, the now-shuttered US particle collider at Fermilab in Batavia, Illinois.

While not statistically significant, the indications announced on 7 March at the Moriond conference in La Thuile, Italy, are consistent with 2011 reports of a possible standard model Higgs particle with a mass of around 125 GeV from experiments at the Large Hadron Collider at CERN near Geneva, Switzerland.

Researchers on the Tevatron see an excess of events produced in the machine’s proton–antiproton collisions that could be caused by a Higgs with a mass between 117 and 131 GeV. The excess had a statistical significance of 2.6 sigma, meaning there is about a 0.5% probability that the result is due to chance.

This is the result of a combined analysis on data from both Tevatron experiments, D0 and the Collider Detector at Fermilab (CDF).

“We’re very excited. It is most interesting to see there is an object that looks like the standard model Higgs,” says Dmitri Denisov, spokesman for D0. He notes that the Tevatron is most sensitive to particles produced by the Higgs decaying into a bottom and antibottom quark, whereas the Large Hadron Collider is sensitive to other decay modes, including the production of two photons, making results from the two machines complementary.

Robert Roser, spokesman for the CDF, agrees. “This is something unique to the Tevatron.”

The Higgs boson is a predicted physical manifestation of the Higgs field proposed in 1964 to explain why some particles have mass while others, like the photon, are massless. The simplest type of Higgs particle is compatible with particle physics’ standard model. The popular extension of the standard model known as supersymmetry can include several Higgs particles, including one that may look similar to the standard-model Higgs.

The Tevatron results are based on 10 inverse femtobarns (a barn is a unit used to measure the probability that particles interact) of data collected by each experiment from 2002 until the machine was shut down in September 2011.

That compares with about 5 inverse femtobarns collected by each of the LHC experiments. However, the LHC has been running at a higher energy of 7 TeV compared to the Tevatron’s 2 TeV, and so is expected to produce a higher number of Higgs particles per collision. Researchers at the LHC are hoping to collect about three times as much data at a higher energy of 8 TeV in 2012, which should allow each of its experiments separately to reach a level of statistical significance of 5 sigma, enough to claim a discovery, if  the standard model Higgs exists.

“I think it’s great that [the Tevatron is] getting some sensitivity to the Higgs but I think the definite answer will come from the LHC by the end of the year, ” says Joe Incandela, spokesman for the LHC’s Compact Muon Solenoid (CMS), one of the experiments looking for the Higgs.

In February CMS announced a possible signature of the Higgs at the statistical level of 1.5 sigma (sometimes quoted as 3.1, a figure that would assume the team looked only in the region where they saw the largest excess, when in fact they searched for an excess of events appearing anywhere in a wide mass range), and its counterpart experiment at CERN, ATLAS, reported one at 2.2 sigma (sometimes quoted as 3.5). Both experiments have since refined their analyses, resulting in slightly weaker signals being reported at Moriond today.

Incandela says that the downward revision of the numbers underlines the need for caution about Higgs indications that fall short of statistical significance. Although some unofficial sources have been combining the results of different experiments to claim a significance on the Higgs' existence nearing 5 sigma, experts caution against doing so as this does not take into account overlapping data generated by different experiments. ATLAS and CMS are not intending to combine their results officially until later this year. The consensus among the experimenters is that only when signals from each become statistically significant should the discovery of the Higgs be claimed.

Matthew Strassler, a theoretical physicist at Rutgers University in Piscataway, New Jersey, says he would call the Higgs discovered when clear signals are seen with separate decay modes pointing to a consistent mass. But he adds, other particle physicists are likely to have other criteria.  “There's not going to be a single day when the community is convinced at once.”

For the now-closed Tevatron, a demonstration of sensitivity to the Higgs can be seen as a kind of moral victory, says theorist Gordon Kane of the University of Michigan in Ann Arbor. In 2011, researchers at Fermilab argued for an extension to the machine's run, on the grounds that they might be able to obtain evidence for the Higgs if they had more time, but their proposal was turned down by the US Department of Energy. “This proves they could have found the Higgs themselves, if they'd had full funding,” says Kane.