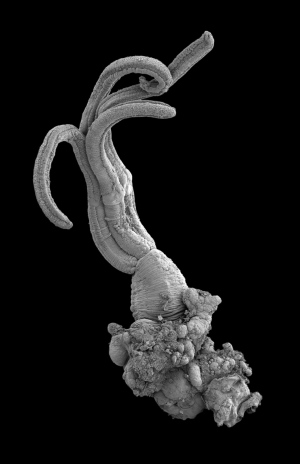 One of two novel species of bone-eating worm that have been discovered in the cold waters of the Antarctic. It has been named Osedax antarcticus.

Researchers have discovered two species of worms that dine on decaying whale skeletons on the icy-cold seafloor of the Southern Ocean. Until now, similar organisms had only been found at warmer latitudes. Other marine invertebrates that feed on rotting wood however do not seem to inhabit Antarctic waters, a fact that could be good news for those who hunt for sunken ships.

The new species, named Osedax antarcticus and Osedax deceptionensis and described today in Proceedings of the Royal Society B1, belong to the genus Osedax, which is Latin for ‘bone devourer’.

The females of these unusual animals are typically found living on sunken whale carcasses, where they feed by growing rootlike structures (the animals lack a digestive tract). The much smaller males live attached to the bodies of the females, acting as sperm banks.

To test what becomes of bones on the Antarctic seafloor, the researchers placed the remains of a Minke whale that had gotten stranded along the coast of Sweden on mechanical “landers”, which they sank to depths of 568 and 650 metres at two sites on the continental shelf off the West Antarctic Peninsula. Each lander also included planks of wood to see what, if anything, would grow on those. At a third site the team sank whale bones only, at a depth of 20 metres.

When study co-author Thomas Dahlgren, a marine biologist at research institute Uni Research in Bergen, Norway, brought the landers to the surface about a year later — once in a snow gale — he was elated to find the bones carpeted with pink-hued, flower-like worms of a species previously unknown to science. The team named it Osedax antarcticus. A single specimen of bone-eating worm was found on the shallow-water sample, and it belonged to another novel species, Osedax deceptionensis.

In striking contrast to the worm-infested bones, the wood came back in “pristine condition”, Dahlgren says. Wooden ships sunk in other ocean basins within a few months become riddled with 'shipworms' — wood-boring organisms that are actually bivalve mollusks — “and after a couple of years there’s nothing left”, he says.

The researchers’ discovery that the wooden planks in their experiment were untouched raises the possibility that ships such as Britain's Endurance, which sank in 1915 after she became trapped and crushed in pack ice, might still be in good condition, says Adrian Glover, a marine biologist at the Natural History Museum in London who is first author of the study. (The team chose oak and Nordic pine for the experiment because those are the types of wood used in the construction of ships such as Endurance.)

The abundance of Osedax worms and the absence of wood-eating bivalves in the study “illustrate how two organisms with similar life histories can have amazingly different biogeographic patterns”, says Kenneth Halanych, a marine biologist at Auburn University in Alabama.

Andrew Thurber, an oceanographer at Oregon State University in Corvallis, agrees, saying that the study raises intriguing evolutionary questions. The Antarctic Circumpolar Current, which flows clockwise around the continent, is thought to act as a barrier that prevents the larvae of many species from reaching Antarctic waters. It's possible that the bone-eating worms may have crossed the barrier numerous times during evolutionary history, perhaps following the migration routes of whales, says Thurber.

By contrast, trees have been absent from Antarctica for at least the past 30 million years, so the only wood in the marine ecosystem comes from human activities such as shipwrecks and waste. The presence of bone-eating worms could be a “window into history past”, says Thurber.