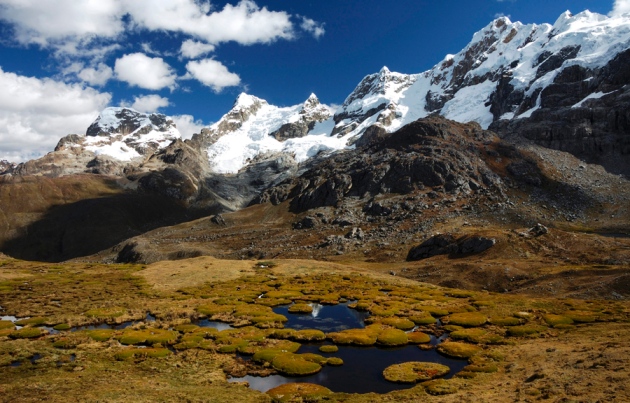 DNA from humans who lived in the Andes 9,000 years ago gives clues to how South America was peopled.

Humans settled in South America in a single wave of migration not long after their ancestors first crossed from Siber­ia into the Western Hemisphere during the last ice age, genetic evidence suggests. The finding, based on DNA from the remains of five ancient humans who lived high in the Peruvian Andes, also hints at how ancient Andeans evolved to thrive at altitudes of more than 4,000 metres.

Presented on 16 April at the annual meeting of the Society for American Archaeology (SAA) in San Francisco, California, the research sheds light on the last major continental migration in human prehistory — and one of the least understood.

South America’s oldest-known human occupation site — the 14,600-year-old Monte Verde settlement in Chile — suggests that people quickly reached the continent after crossing the Bering land bridge one or two thousand years earlier, perhaps skirting the Pacific coast. But some argue for a second migration. They use skeletal evidence to propose that the long, narrow skulls of South Americans living more than about 5,000 years ago differ too much from the rounder heads of more-recent inhabitants, and of living indigenous people, to represent one continuous population1.

In the 1950s and 1960s, Peruvian archaeolo­gist Augusto Cardich discovered human remains bearing the characteristic ancient skull shape in a rock shelter perched high in the Andes in a region called Lauricocha. Carbon dating put the site at around 9,000 years old, making it a classic archaeological example of early high-altitude living. Later researchers dated remains from Lauricocha closer to 5,000 years old, greatly diminishing its appeal for researchers interested in the early prehistory of South America. “People simply forgot about this site. Nobody was interested any more,” says Lars Fehren-Schmitz, a biological anthropologist at the University of California, Santa Cruz.

More than half a century after the site’s discovery, Fehren-Schmitz’s team got permission to look at five human skeletons excavated from Lauricocha and held at the National Museum of the Archaeology, Anthropology and History of Peru in Lima. The team redated the remains, remeasured the skulls and extracted DNA.

Their work, presented by Fehren-Schmitz at the SAA meeting, paints a complicated picture of Lauricocha. Two of its residents, a woman and a 2-year-old child, died nearly 9,000 years ago. The third, a man, perished around 2,500 years later and another man died about 2,300 years later still. The fifth specimen was not dated because of its condition. Only the woman’s skull had a long, narrow shape, which is known as dolichocephaly.

To gauge whether the Lauricocha residents were descended from members of more than one migration, the team sequenced the DNA from their mitochondria, cellular organelles that are passed directly from mother to child, and thus trace maternal ancestry. All five people were found to be descended from maternal lines that are common among modern and ancient indigenous people of North and South America. The males’ Y chromosomes put them on a lineage that arose in the region around the Bering Strait some 17,000 years ago — the most widely accepted time and place for the original human migration into the Americas. These and other DNA data suggested that all the Lauricocha humans are descended from the first humans to reach the Americas, supporting one migration into South America.

Not everyone accepts the argument. Such a wide-ranging conclusion cannot be drawn from a handful of remains found at a single site, says Tom Dillehay, an archaeologist at Vanderbilt University in Nashville, Tennessee. He argues that the 5,000-year gap between the earliest inhabitants at Monte Verde, which Dillehay excavated, and the earliest Lauricocha skeletons leaves the door open for earlier migrations. “There may well be a single migration — they don’t have the evidence for it,” he says.

Ancient human DNA from other parts of South America, such as the Amazon, may yet point to a second migration into the continent, agrees Fehren-Schmitz. His team is now analysing full genomes from Lauricocha and other South American sites to obtain a fuller picture of the continent’s past.

Deborah Bolnick, a biological anthropologist at the University of Texas at Austin, accepts the argument for a single migration. But regardless of the number of waves, there would have been further population movements after that initial, southbound founding trek, she says, adding that analysis of full genomes from ancient South Americans will give a more nuanced picture of the continent’s prehistory. Researchers studying ancient DNA have found evidence for a massive migration from present-day Russia and Ukraine into western Europe around 4,500 years ago2, and Bolnick says that similar upheavals are bound to have happened in the Americas. In a 2014 paper, for instance, Fehren-Schmitz documented a migration into the Central Andes about 1,400 years ago, possibly driven by drought in lower-lying areas3.

Ancient South American genomes may also show how humans adapted to the New World. In a separate study, Fehren-Schmitz and his colleagues looked at a gene variant that protects against altitude sickness. Between around 8,500 and 600 years ago, the presence of the variant increased markedly among the Andeans.

Fehren-Schmitz says that the finding is merely suggestive of local adaptation. But with full, ancient genomes in hand, researchers will be able to look more thoroughly for signs of adaptation to high altitude, says Bolnick. With that question in mind, her team is sequencing DNA from remains of mountain residents of Argentina. Ancient genomes from the Americas may also reveal how humans adapted to shifts in diet — early Americans domesticated maize (corn), potato and other crops — and to diseases imported from Europe, such as smallpox. South American prehistory, it seems, is about to get a lot more complicated.