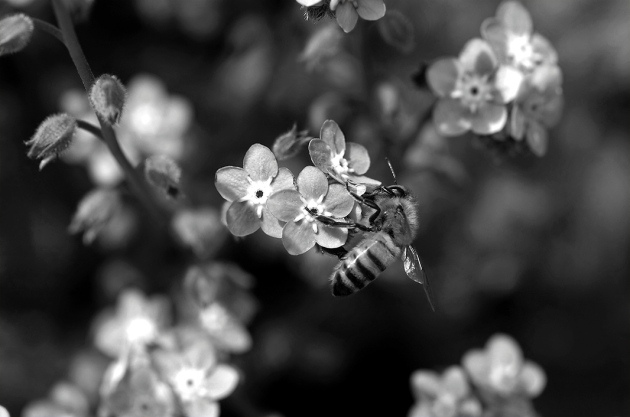 Nanostructures on flowers generate a blue halo that attracts bees.

The car maker Lexus announced a new paint job for its LC coupé this month, which it says will appeal to drivers who value the interaction of science and craftsmanship. The car is blue and the science it leans on is the optics of iridescence. Lexus says that it uses several layers of pigment to increase the amount of incoming light that reflects as blue. The finish, it claims, is “more blue” than anything seen before — and more time-consuming to apply. People who buy the model are unlikely to suffer that common psychological bias experienced by owners of a new car who suddenly notice other vehicles everywhere the same colour as theirs: at present, the company can make just two a day.

Lexus says that its new blue is based on the famous wings of the morpho butterfly. These contain no pigment, but look blue because of how the wing structure physically separates the various components of white light and reflects only certain wavelengths. The company could also have borrowed the idea from the (less PR friendly) tarantula spider, many species of which use the hairs on their legs and body to show off the same blue effect. In fact, such iridescence is fairly common in plants and animals — sometimes deliberate (the shimmer of the peacock tail) and sometimes less so (the same effect from a fresh cut of meat). It’s why a blue-cooked steak really does look blue. blue pigments are rare), and this week a paper online in Nature explores its role in flowering plants (E. Moyroud et al. Nature http://dx.doi.org/10.1038/nature24285; 2017).

Fewer than 10% of the 280,000 species of flowering plant naturally produce blue petals. This presents a problem, because the bees on which many flowers rely for pollination struggle to see any colour other than blue. So how do these flowers attract the insects they need?

The new study shows that they use structural-colour techniques to generate an iridescent blue halo. From the tulip to the golden perennial sweet pea, a dozen different flowering plants of varying colours were found to have surface nanostructures that produced the optical effect. It’s visible to the human eye, too, and best seen against dark-coloured petals.

In a series of tests with bumblebees (Bombus terrestris), the researchers demonstrate that the insects avoid artificial flowers made to have smooth surfaces that don’t produce the blue ring. And they show how the insects see the halo more easily than we do, because bee vision can better distinguish the ultraviolet frequencies into which the structural-colour effect spreads. The findings are discussed in an accompanying News & Views article (D. D. Deheyn Nature http://dx.doi.org/10.1038/nature24155; 2017).

Lexus boasts that it took more than a decade to develop its new blue paint. It took the flowers a lot longer: their ability to generate the halo effect has evolved over millions of years, and perhaps emerged in each species independently. In both cases, the colour is best appreciated at first hand. Photographs do not do it justice. Take a stroll in the garden. And keep one eye on the road.