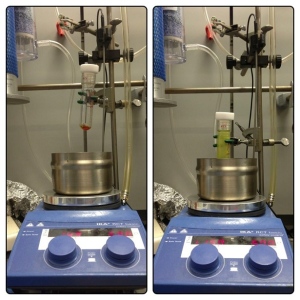 The set-up for Blog Syn's first attempt at replicating a literature chemical reaction.

Scrounging chemicals and equipment in their spare time, a team of chemistry bloggers is trying to replicate published protocols for making molecules. The researchers want to check how easy it is to repeat the recipes that scientists report in papers — and are inviting fellow chemists to join them.

“We’re just a bunch of people who want to make the reactions work,” explains blogger See Arr Oh, who is based in the United States and prefers not to reveal his real name. The other team members include chemistry graduate student Matt Katcher from Princeton, New Jersey, and two bloggers called Organometallica and BRSM, who together have launched Blog Syn, in which they report their progress online.

Among the frustrations he and others have experienced with the chemical literature, says See Arr Oh, are claims that reactions yield products in greater amounts than seems reasonable, and scanty detail about specific conditions in which to run reactions. In some cases, reactions are reported which seem too good to be true - such as a 2009 paper which was corrected within 24 hours by web-savvy chemists live-blogging the experiment; an episode which partially inspired Blog Syn. ”I never forgot that reaction,” See Arr Oh adds.

“Ask any synthetic chemist what they spend most of their time on, and they will admit that it is getting literature reactions to work,” says chemist Peter Scott of the University of Warwick in Coventry, UK. “That is the elephant in the room of synthetic chemistry.”

Blog Syn is one of several places where chemists can check synthesis know-how. The journal Organic Syntheses, for example, only publishes synthetic procedures that have been checked and verified by a member of its editorial board. Scott is involved in a separate project to compile a database of about 5,000 chemical procedures, called SyntheticPages, which is part of ChemSpider, an online database of chemical structures.  And the Journal of Visualized Experiments (JoVE) — a peer-reviewed online journal that publishes videos of experiments — will launch a chemistry channel on 4 February. That could help with one difficulty faced by some chemists: published chemistry reactions are written in a standard format that is supposed to make things easy to follow, yet unwritten tweaks are often needed to make experiments succeed in practice. 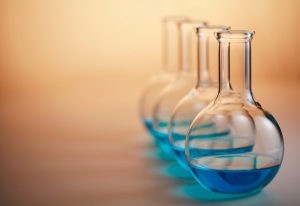 In an ideal world, chemists could be sure of getting the same results when repeating published reactions.

See Arr Oh says that Blog Syn is different to JoVE and SyntheticPages because those initiatives involve chemists refining and verifying their own chemical reactions. By contrast, Blog Syn intends to use crowd sourcing, meaning that outsiders — chemists that the bloggers already know, to start with — will check work that has already been published by others.

So far, the bloggers have investigated one reaction, which they picked because it would be especially useful if it were easy to replicate; it uses an iron and sulphur catalyst to make ring-shaped molecules containing oxygen and nitrogen1. Following the published method, the team couldn’t get as much of the final product as the original authors did. “It does indeed work, but we’re not positive yet what factors the authors have that we don’t,” says See Arr Oh. One problem, the team's blogpost says, was that the written paper didn't make it clear how stringently they needed to exclude air from the reaction.

The chemists’ online efforts reflect a growing focus across the sciences on the importance of being able to reproduce published procedures. One project, the Reproducibility Initiative, was set up last year to enable researchers to have their study ‘validated’ by outside checkers. Another, the Reproducibility Project, is dedicated to estimating the reproducibility of psychology experiments. The director of that project, social psychologist Brian Nosek of the University of Virginia in Charlottesville, thinks that Blog Syn will work only if chemists can be rewarded for participating.

See Arr Oh accepts that funding Blog Syn will be the challenge to developing it on a larger scale. He is exploring ways to make the blog easier to manage, including crowd-sourced funding methods such as the website Kickstarter. Until then, he will continue to check reactions in his spare time. “At the moment these reactions are done at night under cover of darkness,” he says.