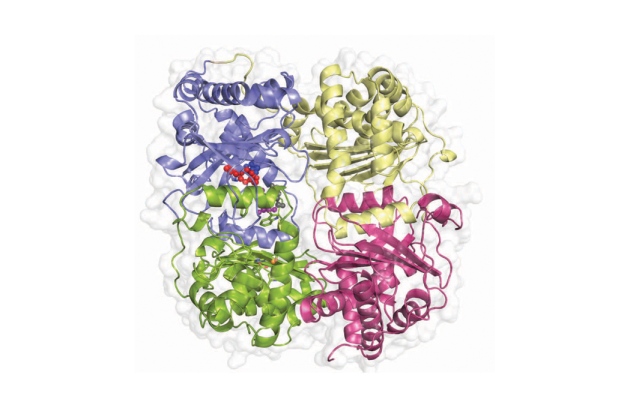 The structure of an insulin-degrading enzyme with a newly discovered inhibitor molecule attached to it — an action that prevents the excessive breakdown of insulin in type 2 diabetes patients.

A long-sought target in the treatment of diabetes is coming into focus, as researchers report the discovery of a molecule that inhibits the breakdown of insulin in mice.

The compound, reported today in Nature1, blocks a protein called insulin-degrading enzyme (IDE) in mice. “If you inhibit the enzyme that breaks down insulin, insulin levels in your body should be higher and your blood glucose should be lower,” says David Liu, a chemical biologist at Harvard University in Cambridge, Massachusetts. And because people with type 2 diabetes tend to have low insulin levels, it could lead to new ways of treating the disease, he says.

Although it was first reported 65 years ago2, IDE has proved difficult to inhibit. Most of the potential candidates were either too unstable to persist in the body, or lacked the specificity to block IDE without also blocking other important proteins.

Liu therefore teamed up with his colleague Alan Saghatelian and with others to screen a wide range of molecules for those that are both stable and specific. They then tested the effects of the strongest candidate molecule in lean and obese mice given glucose.

As expected, blood sugar levels dropped faster in those that received the inhibitor than in control mice, whether the mice were lean or obese. But the team also found something surprising: the IDE inhibitor had the opposite effect when the mice were injected with glucose rather than ingesting it.

Liu and his colleagues suggest that the reason for the different responses could be that IDE also affects two other gut hormones that regulate blood sugar: amylin and glucagon. For example, mice that received the inhibitor had higher levels of glucagon, a hormone that boosts blood sugar levels, following glucose injection.

However, mice that ingest glucose tend to have much higher insulin levels than mice that are injected with it, says Liu, so any effect on other hormones may simply have been drowned out by the proportionally large impact on insulin when glucose is ingested.

Daniel Drucker, an endocrinologist at the University of Toronto in Canada, says that the results are exciting, but that he is concerned that the effects of the inhibitor on glucagon could impact its usefulness in treatment of diabetes. “The major unanswered question,” he says, is 'What happens with chronic inhibition?'. You wouldn’t want glucagon levels to be high.”

But Liu remains optimistic. “You could probably aim for a short-lived IDE inhibitor that is taken before a meal,” he says. “Most of us don’t inject our lunch.”