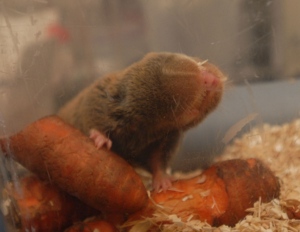 The blind mole rat is a long-lived and cancer resistant rodent.

There's more than one way for long-lived subterranean rodents to avoid cancer, and they might hold cellular clues to effective treatments in humans.

Cell cultures from two species of blind mole rat, Spalax judaei and Spalax golani, behave in ways that render them impervious to the growth of tumours, according to work by Vera Gorbunova at the University of Rochester in New York and her colleagues1. And the creatures seem to have evolved a different way of doing this from that observed in their better known and similarly cancer-resistant cousin, the naked mole rat (Heterocephalus glaber).

Some 23% of humans die of cancer, but blind mole rats — which can live for 21 years, an impressive age among rodents — seem to be immune to the disease.

“These animals are subject to terrific stresses underground: darkness, scarcity of food, immense numbers of pathogens and low oxygen levels. So they have evolved a range of mechanisms to cope with these difficulties,” explains co-author Eviatar Nevo at the University of Haifa in Israel, who has published papers on the creatures since 1961. “I truly believe work with these animals will bring a dramatic revolution in medicine.”

Three years ago, Gorbunova was involved in another study that described the unusual way in which the cells of the naked mole rat behave in the lab2. The authors say that this hints at how the rats resist cancer. When cells from most animals are grown in a culture dish, they divide until they form a single layer of cells covering the base of the dish. At this point, healthy cells stop dividing, whereas cancerous ones continue. But the cells of naked mole rats behave as if they are 'claustrophobic', ceasing to divide much sooner than cells from other species.

“We thought the blind-mole-rat cells would use the same mechanism as those of naked mole rats," says Gorbunova, “so the fact that they do not was a big surprise”. Rather than ceasing to divide, the cells of blind mole rats reach a point at which they die en masse in a bout of cell suicide that Gorbunova and her co-authors call “concerted cell death”.

This seems to be triggered by the collective release of a signalling molecule called interferon-beta, although what causes this is unclear. “The cells have some way of sensing when they are overproliferating, but we still don’t know precisely how they sense that,” Gorbunova says. “This is what we need to find out next, because it could provide some clue as to how we could activate the same process in human cells.”

However, this is not necessarily the mechanism that allows blind mole rats to resist cancer, points out Jerry Shay, who studies mechanisms of cellular ageing and death at the University of Texas Southwestern Medical Center in Dallas. “It is possible the researchers simply have not worked out adequate methods to maintain these cells long-term in culture,” he says. “It’s possible that the culture conditions are causing increased stress on the cells, resulting in cell death.”

Indeed, no biologist has yet worked out how to keep the cells of blind mole rats alive long-term in culture. “If we apply the same technique that works for 20 other species of rodent, for some reason that’s not good enough for blind-mole-rat cells — they always die,” says Gorbunova.

But, counter-intuitively, this mass cell death might be the very thing that makes the animals so long-lived: it could be a natural mechanism their bodies use to clear precancerous cells, stopping tumours in their tracks.