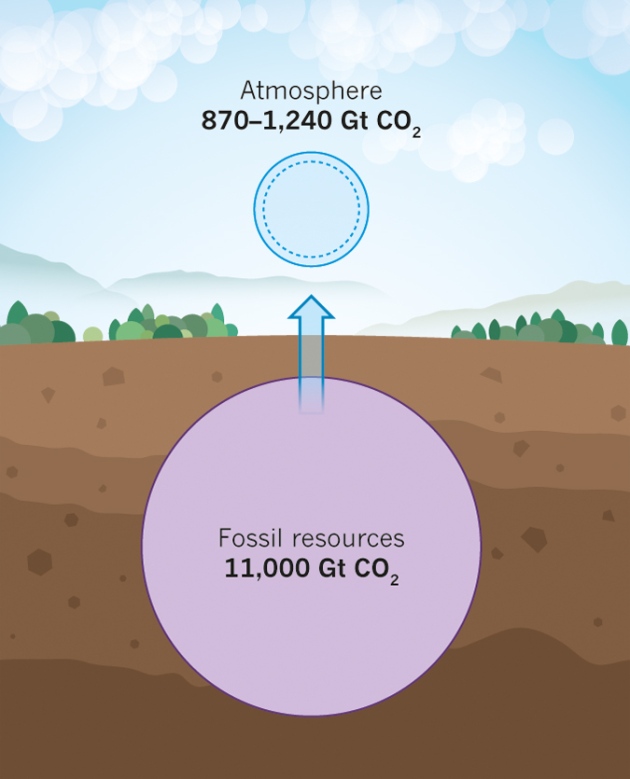 The carbon still in fossil-fuel reserves dwarfs the amount that can be safely emitted as CO2 to the atmosphere without heating the world by more than 2 °C, researchers estimate.

Canada, Russia, Saudi Arabia and the US cannot burn much of the coal, oil and gas located within their national territories if the world wants to restrain global warming. That’s the conclusion of a new analysis aimed at determining what it will take to keep average global temperatures from rising more than 2 °C this century — a goal adopted during ongoing negotiations under the United Nations Framework Convention on Climate Change.

"If we want to reach the two-degree limit in the most cost-effective manner, more than 80% of current coal, half of gas and one third of oil need to be classified as unburnable," said Christophe McGlade, a research associate at University College London's Institute for Sustainable Resources (ISR) and lead author of the report published in Nature on January 8, during a press conference. Those global restrictions apply even if technologies that can capture carbon dioxide and dispose of it become widespread over the next decade. "Rapid development of [carbon capture and storage] only allows you to produce very slightly more."

According to the study, the vast coal deposits to be found in China, Russia and the US should remain underground, as should most of the natural gas in the Middle East. Nevertheless, natural gas in other parts of the world, such as the US, could play a big role in reducing CO2 pollution — but only if it is used to substitute for even dirtier coal and does not keep more nuclear or renewable sources of power from being built.

The research project started with the UN Intergovernmental Panel on Climate Change's calculation that in order to have at least a 40% chance of keeping global warming below 2 °C, somewhere between 900 and 1,200 gigatonnes of carbon dioxide can be dumped in the atmosphere. Using that budget, McGlade and ISR economist Paul Ekins explored via computer modeling "what fossil fuels should be unused and where are they located," Ekins explained.

Like other investigators before them, the researchers quickly found that roughly two thirds of known and expected fossil-fuel deposits cannot be burned. If the world burned all the coal, oil and natural gas already known to exist and profitably extractable, roughly 3,000 gigatonnes of CO2 would enter the atmosphere — nearly three times as much as the UN Intergovernmental Panel on Climate Change's suggested CO2 budget.

But the new analysis then took the extra step of looking at which countries and territories possess these unburnable resources and reserves, using estimates from the British Geological Survey, US Geological Survey and other data sources. So, for example, in the entire Middle East 260 billion barrels of oil should not be burned to meet the 2 °C target, which is roughly equivalent to the estimated current reserves of just Saudi Arabia. Also, any oil or gas to be found in the arctic should not be tapped, McGlade added.

Canada holds the world's single largest share of unburnable oil because most of that reserve comes in the form of tar sands, a mix of bitumen and sand that requires burning natural gas to transform it into usable petroleum products. "85% of its reserve base of 50 billion barrels has to remain in the ground," McGlade said.

Designating any fossil fuels as unburnable would represent a seismic shift in global policy and business. "In 2013 oil companies spent $670 billion in exploring for new oil and gas resources," Ekins noted. "One might ask why are they doing this when there's more in the ground than we can afford to burn?"

Currently, the world is on pace for as much as 5 °C of global warming, or the equivalent of burning an extra roughly 300 billion metric tons of coal and 220 billion barrels of oil, including some of the reserves likely to be discovered in the rapidly melting arctic. To avoid burning all that fossil fuel the ISR computer model suggests building more nuclear power plants, switching to rooftop solar power and burning biofuels while capturing and storing the resulting carbon to help draw down atmospheric CO2 concentrations. These concentrations have already touched 400 parts per million, the highest levels seen in at least 800,000 years. "Shifting to more efficient vehicles, that's what the model would do," McGlade added.

Although the analysis is just a computer model, it does highlight the consequences of combating climate change for fossil-fuel owners — whether corporations or countries. Around the world today fossil fuels — especially coal — are burned at an increasing rate to power growing economies and allow light, refrigeration, computing and other modern services and conveniences. That surge in consumption is a seemingly unavoidable cost of improving the quality of life for billions of people still mired in energy poverty yet increasingly inconsistent with efforts to combat climate change that will harm the poorest people most.

So the multitrillion dollar question becomes: Which countries and companies will give up burning fossil fuels so that others can burn their share? "Policymakers in China, Europe and the US are all saying they support this 2-degree guardrail," Ekins noted. "That has certain implications."