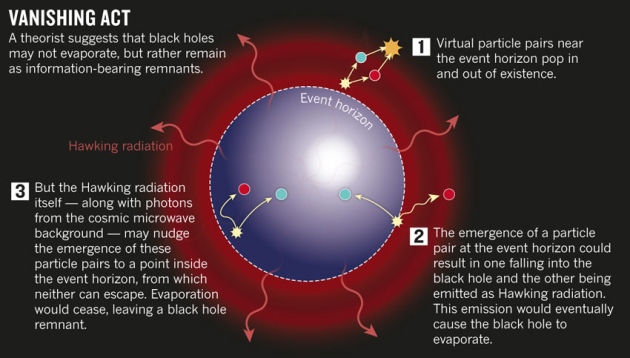 Old black holes never die, they just fade away. So says veteran cosmologist George Ellis of the University of Cape Town in South Africa, who suggests that the cosmos may be littered with an untold number of shrunken black hole remnants.

Ellis’ speculative report, posted on 17 October on the preprint server arXiv (G. F. R. Ellis http://arxiv.org/abs/1310.4771; 2013), seems to undermine the seminal work of Stephen Hawking, a cosmologist at the University of Cambridge, UK. In 1974, Hawking calculated that, owing to quantum effects, black holes are not entirely black: some particles escape the black hole’s gravitational barrier, known as the event horizon. For a solar-mass black hole, these particles, known as Hawking radiation, would be emitted over the course of 1067 years until the object vanished without a trace (S. W. Hawking Nature 248, 30–31; 1974).

Although many physicists are sceptical about Ellis’s work, it highlights a long-running debate over the ultimate fate of black holes. Uncertainties abound because of the difficulties in reconciling quantum theory — which predicts the Hawking radiation — and Einstein’s classical theory of gravitation, which defines a black hole’s structure. “This is very much a living issue that people are confused about,” says Vijay Balasubramanian, a string theorist at the University of Pennsylvania in Philadelphia.

The debate also touches on one of the most cherished beliefs about the Universe: that information is always preserved. If black holes evaporate, then the information they contain may die along with them. By contrast, a black hole remnant would offer a way in which information might be preserved (even if it could never be extracted). By serving as a storehouse, a remnant “could be a fantastic way of resolving all the issues we have with black holes”, says theoretical physicist Jeff Murugan of the University of Cape Town.

In Hawking’s original view, quantum theory permits large fluctuations in energy for brief moments of time. As a consequence, the vacuum of space seethes with particle–antiparticle pairs that continually pop in and out of existence (see ‘Vanishing act’). When this occurs at the event horizon, one member of a particle pair could be sucked into the black hole, whereas the other could escape as Hawking radiation, depleting the black hole’s mass.

But Ellis says that this radiation has another effect. According to Einstein, any source of mass or energy distorts space. A black hole, a body so massive that space closes in on itself, is an extreme example of that distortion. The Hawking radiation would add even more distortion, Ellis says, and so, too, would the ubiquitous photons from the cosmic microwave background, the bath of radiation left over from the Big Bang. He says that these two types of radiation bend space-time in such a way that the region from which the Hawking radiation is generated eventually gets pushed back behind the event horizon. Once it has been relocated, the radiation can no longer escape and the black hole plateaus at a constant mass.

The analysis is more of an essay than a full-blown study, says string theorist Samir Mathur of Ohio State University in Columbus, because Ellis does not perform a thorough calculation for the bending effect of the radiation. Other physicists say that Ellis is probably incorrect. Nonetheless, Balasubramanian says, the paper is an example of physicists’ innate dissatisfaction with evaporating black holes. “The stuff radiates in a weird way, information is lost and then we turn intellectual somersaults to try to account for why the information isn’t lost,” he says.

But black hole remnants do not offer a perfect solution to the problem of information loss, either. To contain all the information originally stored in a large black hole, the tiny remnants would need to have an infinite number of internal states — which would violate quantum theory, says Mathur.

In 1997, Mathur found a potential way around this problem. He and his colleagues used string theory, a way of marrying quantum theory and gravity, to describe all of the possible states of the gravitational field of black holes. They found that these states lay just outside the classical event horizon in a ‘fuzzball’ of quantum states. If the fuzzball was the black hole’s true boundary, then there would be no Hawking radiation emitted from the event horizon, no evaporation and no information loss, he says.

Last year, others proposed a more violent approach to the problem of information loss. They suggested that the particles in the Hawking radiation did not behave randomly but were instead ‘entangled’ with each other in such a way that they could be messengers from the darkness, conveying information that had been stored in the black hole. But that entanglement had its own consequence: an enormous amount of energy would be unleashed at the event horizon, such that anything falling in would be instantly immolated (see Nature 496, 20–23; 2013).

The ongoing struggle to preserve the precepts of quantum theory without losing information may offer clues about how and where quantum physics begins to significantly modify Einstein’s theory of gravity, says Matt Visser, a cosmologist at Victoria University of Wellington. The conventional picture holds that quantum theory makes big corrections to gravity only well inside the event horizon, near the black hole’s singularity — the point at which the density of matter becomes infinite. But some physicists think that quantum physics may be blurring the sharp boundary of the event horizon itself. Ellis’s work, Visser says, puts a stronger spotlight on such speculations.