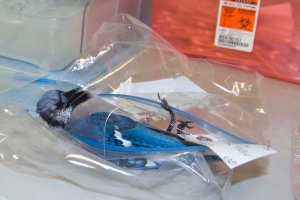 West Nile virus appears to be killing more blue jays this year than in the past. (This blue jay tested positive for West Nile.)

Texas is bearing the brunt of an outbreak of West Nile virus that is on track to be the worst the United States has ever experienced. According to the US Centers for Disease Control and Prevention (CDC), 46 people in the state have died from the virus this season, and 526 have been affected by the neurological aspects of the disease that can lead to paralysis. That is 40% of the burden faced by the country.

For officials at the Mosquito Control Division of the Harris County Public Health Service in Houston, dead crows and blue jays provided an early warning of the outbreak — and could help in understanding the virulence of the virus.

“A red flag was the number of birds dying of West Nile in June,” says Rudy Bueno, the division's director. Hundreds of birds died from the virus soon after it arrived in the United States in 1999, but since 2005, Harris county officials have detected the virus almost exclusively in living birds which they netted, tested and then released back into the wild. Bueno notes that the blue jays, which originally died with West Nile virus in their blood, appeared to have grown immune. 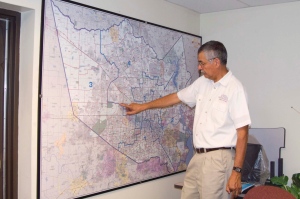 Rudy Bueno says West Nile virus has been detected in 60% of Harris county.

But the trend ended this year. Harris county reported that it had found the virus in 16 dead birds last week alone, more than those found in the entire year for each of the past three years. “Even the blue jays are dying, so something has changed,” Bueno says. “We know that numbers fluctuate, but this year took everybody by surprise.”

The Mosquito Control Division presides mainly over Houston, but also tracks the virus in birds and mosquitoes found elsewhere in Texas. It began to collect and test mosquitoes and birds annually for St Louis encephalitis in 1965, but after West Nile arrived in Texas in 2002, it began to monitor both viruses.

West Nile virus thrives in several species of bird, and mosquitoes transmit it from them to humans through blood meals. Because West Nile virus monitoring programmes run by the CDC have shrunk owing to budget cuts over the past few years, centres such as the one in Harris county have become invaluable to virologists trying to understand why outbreaks occur.

Virologists blame this year’s resurgence partly on a mild winter, which may have helped the virus to persist through the season, followed by a scorching summer, which could have sped up replication1. But Bueno and others wonder whether the number of deaths has risen because the virus has evolved into a more virulent form. To examine the possibility, Bueno sends infected birds to researchers at the University of Texas Medical Branch (UTMB) at Galveston, who extract tissue from the birds' brains in order to grow the virus in cell culture. They store virus samples in a reference bank sponsored by the US National Institutes of Health, called the Emerging Viruses and Arboviruses Reference Collection, at the UTMB. Using the collection, researchers can determine how the virus has changed over time. For instance, certain mutations that arose since West Nile arrived in the US allowed some forms of the virus to pass more quickly from host to host. 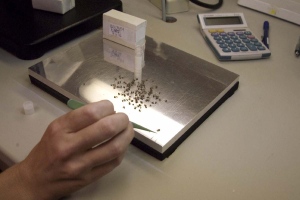 Mosquitoes are collected from traps and tested for West Nile virus.

Some of the samples go to Alan Barrett, a virologist at the UTMB, who sequences the viruses to detect changes. Barrett has not completed his analysis on samples from 2012, but says that “we are definitely seeing evolution of the virus”.

Whether the evolution has any role in the latest outbreak remains unclear, however. And birds haven't been good indicators throughout the country. In California, which has seen 92 people infected with West Nile virus this year, birds seem to be surviving better than before, says William Reisen, an entomologist at the Center for Vectorborne Diseases at the University of California, Davis. “Scrub jays, crows and magpies are carrying the same amount of virus as in previous years,” he says, “but a higher proportion of them appear to be surviving.” 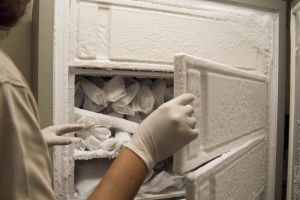 Infected birds are frozen and shipped to a lab in Galveston,Texas, for further study.

“There is probably a mixture of factors behind this year’s outbreak and proving which ones matter is not as straightforward as it sounds,” Barrett says. “People may tell you their opinions and make claims,” he adds, “but even though we have a tremendous amount of information on West Nile stockpiled, we still don’t really understand why it causes more or less disease year to year.”