A tumour can be a hotbed of diversity, British scientists have discovered. Just as different types of tumours have distinct genetic mutations, so do separate parts of the same tumour.

Findings in a study published in the New England Journal of Medicine1 help to explain why cancer is so difficult to study and treat. A clinician's conclusion about prognosis or the best course of treatment can be contradictory depending on which part of the tumour the biopsy is taken from. 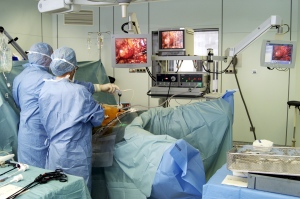 Tumours can contain a multitude of genomes, which can complicate treatment.

“This adds another layer of complexity,” says Charles Swanton from Cancer Research UK’s London Research Institute, who led the study. “It makes flying to the Moon look like a walk in the park.”

As part of a clinical trial, Swanton’s team did a detailed analysis of the tumours of four patients with kidney cancer. They collected samples from several parts of the main tumours at various times during the trial, as well as from the organs to which the cancer had spread. Then every sample was analysed to look at its mutations, patterns of genetic activity, chromosome structure. “We used every possible genomics technique available. Even then we were only scratching the surface,” says Swanton.

The team used its results to reconstruct the evolutionary history of each cancer. For example, the first patient’s tumour had split down two lines. One small part had double the usual tally of chromosomes and had seeded all the secondary tumours in the patient’s chest. The other branch had spawned the rest of the primary tumour’s mass. Similar results were seen in the other patients.

The main tumour was surprisingly varied. Just one-third of the mutations were common to all 14 samples, and one-quarter were found in just one sample and no others. Only one known kidney cancer gene — VHL — was consistently mutated. Swanton and his team even found signs of convergent evolution: the tumours had disabled the same gene — SETD2 — in three different ways. “There is a bewildering amount of diversity present in each tumour,” he says.

These results show that any one biopsy presents only a keyhole view of a much bigger landscape. “I think many cancer researchers intuitively feel that this heterogeneity is present, but this [study] provides solid evidence,” says Darryl Shibata, a cancer geneticist from the University of Southern California, Los Angeles.

The diversity of a tumour could explain why scientists have struggled to find clinically useful biomarkers — substances produced by the body that indicate the presence or nature of a cancer. Biomarker studies usually rely on a single biopsies, which may be misleading. In different parts of a tumour, Swanton's team found genetic signatures associated with both good and poor prognosis.

The findings could also explain why many treatments eventually stop working. Cancer drugs often target cells with specific mutations, and those might exist only in restricted parts of a tumour. Other, unaffected cells, might act as an ‘evolutionary reservoir’ that allows the tumour to grow again, like the regenerating heads of the mythical hydra.

This could explain why some patients with kidney cancer fare better if surgeons remove their main tumour even if the cancer has spread. “It may be that by removing the evolutionary reservoir of diversity, you improve a patient’s outcomes,” says Swanton. “There is less material for the tumour to adapt to environmental pressures.”

Now, the team want to find the mutations that are present in all parts of a tumour. These will present the most inviting targets for drugs, and the most robust biomarkers. But to do that, the study will need to be repeated in tens or hundreds of tumours, says Swanton.

Shibata says that the falling cost of DNA sequencing will make that more feasible, but Swanton notes that collecting enough biopsies would still be expensive, as would the analysis of the resultant data. “Our servers were clogged up for two to three months,” he says. “We’re going to have to make a big investment in computing and bioinformatics expertise.”

The study has immediate implications for cancer genome projects — such as the US National Institutes of Health’s The Cancer Genome Atlas — that are trying to identify the full suite of mutations underlying individual tumours. These have all relied on single biopsies, and for many cancers it will be difficult to obtain samples with enough of a spatial spread.

An alternative approach would be to sequence a single sample multiple times. The greater depth would reveal small, distinct populations of cells that might otherwise remain hidden. “This is likely to be the workhorse way we get at the problem,” says Andy Futreal from the Wellcome Trust Sanger Institute in Hinxton, UK, who was involved in the latest study. But deep sequencing is expensive, and Futreal suspects that they may need to compromise by scaling back the number of genomes they analyse. “We may need to sacrifice overall numbers to really understand how deep the rabbit hole is,” he says.