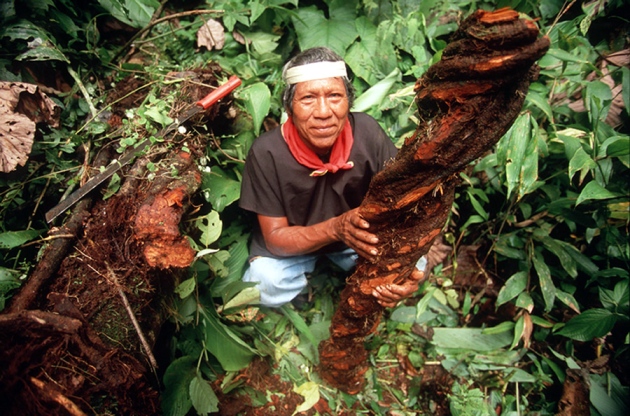 A shaman in Ecuador gathers plants to make ayahuasca, which was at the centre of a biopiracy row.

A major international agreement is coming into force to combat ‘biopiracy’ — profiting from biological products while failing to compensate the community from which they originate. The Nagoya Protocol aims to ensure that developing nations benefit when their plants, animals or microbes are used by foreign scientists.

But some researchers fear that the agreement will stymie vital activities, such as conservation or monitoring and treating infectious diseases.

The protocol takes effect on 12 October, four years after it was signed in Nagoya, Japan. Its 92 signatories include Brazil, Japan and the European Union. Notably absent are China and the United States, although researchers in those countries will have to comply with the laws of nations where they collect samples.

Part of the United Nations Convention on Biological Diversity (CBD), the protocol has the stated purpose of ensuring “fair and equitable sharing of benefits arising out of the utilization of genetic resources”, which covers all organisms. Researchers must already obtain permits to collect samples from certain countries, but the protocol means that they will have to enter into ‘access and benefit sharing’ (ABS) arrangements. These set out who might profit — and how — from the organisms being used, and stipulate how to distribute the benefits fairly, for example through co-authorship of publications, or sharing profits from products such as drugs, vaccines or crops.

Several high-profile cases underscore the need for such rules, says Braulio de Souza Dias, executive secretary of the CBD secretariat. In a case often cited as a victory against biopiracy, a European patent on an antifungal agent derived from neem, an evergreen tree native to India, was revoked in 2000 after a long legal battle, on the grounds that Indian farmers had used the fungicide for decades. Other controversies have involved a US patent on the use of turmeric in wound healing, which was withdrawn, and one on ayahuasca — a hallucinogenic tea made from Amazonian plants — which has now expired.

The importance of the issue also became apparent in 2007, when Indonesia baulked at sharing samples from people infected with avian influenza with the World Health Organization, on the grounds that the nation would not benefit from any resulting papers or patents. Indeed, scientists working abroad stand to gain from the protocol, says Dias, because it will build trust between them and local people, which could lead to better access to organisms. In the past, “no one trusted anyone”, he says. The protocol could also help countries to access treatments that are developed using disease samples taken from their own people.

But although scientists understand the need for ABS agreements, many worry that they will have destructive consequences.

The protocol has the potential to hamper disease monitoring, according to the London-based biomedical research charity the Wellcome Trust. Red tape could make it harder to quickly share samples across borders, which in turn could cripple efforts to monitor drug resistance in malaria, for example, or outbreaks of Escherichia coli. “There need to be equitable arrangements for sharing benefits, but it is absolutely critical that policy-makers ensure they do not hinder these international partnerships that are so vital to protect global public health,” says David Carr, a policy adviser at the Wellcome Trust.

The new rules will also present challenges for synthetic biologists, who combine genetic code from many different organisms to create drugs or sensors. This could require dozens of ABS arrangements for a single product, says Tim Fell, chief executive of Synthace, a biotechnology company in London. Such bureaucracy could push European companies to countries — particularly the United States — that are not signatories, he adds.

International research collaborations may face a bureaucratic challenge if their members operate under different laws, says the London-based BioIndustry Association.

There is also uncertainty about the protocol’s reach, particularly for genetic sequences. A possible interpretation of the rules is that anyone who uses sequence data would have to complete ABS paperwork. Christopher Lyal, who studies weevils at London’s Natural History Museum, helps to run a CBD website that provides advice about the protocol. Even he is unsure of how it will affect him: “If I compare two sequences to reach a conclusion on identification, is that utilization? I don’t know.”

The BioIndustry Association also says that the threat of criminal charges for non-compliance — the UK government is considering jail terms of up to two years — could have a chilling effect on research.

Some researchers think that the protocol could even hurt the countries it is intended to help. Kazuo Watanabe, director of the Gene Research Center at the University of Tsukuba in Japan, fears that red tape surrounding access to and exchange of specimens will hinder field studies in disciplines such as taxonomy and ecology. This, in turn, will make it harder to help conservation efforts.

Dias acknowledges the potential problems, but says that people will have to deal with them: “There will be a cost for a transition phase, yes, but it should be for the better.”

Elisa Morgera, who specializes in global environmental law at the University of Edinburgh, UK, agrees. There may be uncertainty in the short term, with “difficult negotiations and possible missteps”, she says, but the protocol offers a way to rebuild trust. “Those genuinely interested in the long-term viability and reputation of bio-based research and innovation would be well advised to constructively contribute to this process,” she says.