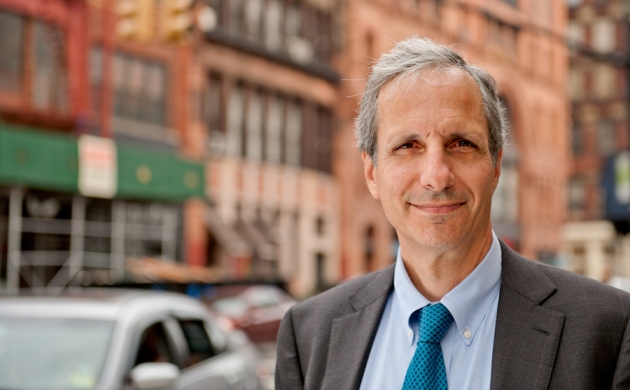 The New York Genome Center (NYGC) was created three years ago to help New York city fulfil its potential as a biomedical-research hub. Now the centre, established with support from the city and from 12 founding research and health-care institutions, is claiming its own patch of Manhattan.

In June, the organization — which aims to be a core facility, a non-profit genome service provider and a place for fostering academic and industry collaboration — moved into brand-new leased digs in lower Manhattan. The US$54-million, 16,000-square-metre space, which contains wet labs, sequencing and data-handling cores, and bioinformatics workspaces, will officially open with a ribbon-cutting ceremony on 19 September.

Amid the din of street traffic and the sound of landscapers finishing one of the centre’s rooftop gardens, NYGC president and scientific director Robert Darnell sat down with Nature to answer a few questions.

What is the NYGC’s primary objective?

I think our primary objective is to try and drive treatment based on genomic discovery. That’s a lofty goal, admittedly, and reaching it has many steps. One of those exciting steps is developing ourselves as an honest broker to facilitate and mediate interactions among different health-care-interested parties, from academia to industry to pharma, but also among disciplines within each domain: there are people who understand medical disease, bioinformatics, computational science, genetics, mathematicians.

People have long said that New York city punches below its weight in the biomedical sciences. Why do you think that is?

There have been significant discoveries and advances, and resources given to genomics, and this city really hasn’t been in that game up until now. It certainly has been in a small way, but not in terms of getting big grants, big resources and big philanthropic contributions the way Boston has or Seattle or St Louis.

But is that the cause or a symptom of another problem?

In some ways it was a symptom of New Yorkers being New Yorkers. And in some ways the technology was not as overtly crucial to science as it became four or five years ago. The frustration of individual scientists in New York — including myself — was with the limitations of trying to drink from the flood of information with an incompetent little sipping straw. The difficulty, even at a place like Harvard, is how you get help to an individual scientist in an individual lab that’s got 10 people who are starting to produce high-throughput data. Out of that frustration grew the idea that something more than just a core facility that shares resources really needs to be built.

How does the NYGC set itself apart from other sequencing centres?

Part of the answer to that is the very conceptual design, which is an open consortium of originally 12, and probably soon to be more than 15, academic partners — but also the bringing in of pharma, biotech and industry. In building a genome centre in 2013, we’re building the clinical actionability of genomics into the bricks and mortar of this place. Ultimately, the real synergy is to take sequence information and put it together informatically and computationally, and actually bridge the gap by interacting with pharma, saying how do these mutations interact with what’s on the pharma shelf. That’s really doable now. It’s not going to be perfect, but we can get started.

It looks like there is a lot of lab space, and more than a floor of space that’s currently undeveloped. What kinds of people are you looking to put there?

The biggest need we have is to build people in the area of complex processing of biomedical data: population genetics, statistical genetics, computational science, those areas where large amounts of sequencing are going to be coming in.
Junior and senior faculty will all have, I imagine, joint appointments with one or more of the academic institutions in New York. So they will be instantly integrated into the local genomic communities and will have access to graduate students. But they will also be located here, so they will help suck the genomic scientists into a common room, where we can argue about platforms, about intellectual strategies, about the pros and cons of network analysis versus other kinds of information technologies.

This is a huge space in a pretty expensive city. How will you keep the doors open?

You got an extra buck?

Generally, it’s three areas. We will have revenue here from grants that will almost exclusively be collaborative grants with other institutions. A second source of income, which is crucial, is philanthropy. New York’s a great place for that. It’s got the best philanthropy probably in the world. The last component is our revenue stream. We’re not-for-profit, so we keep the prices down — and for the people who have joined us, we keep the prices way down. There’s not a huge margin, but there should be enough to support the people and the machines here.

In terms of providing sequencing, isn’t that a competitive market?

Ultimately, you deal with it by providing value — and it’s quality over quantity in some respects. I don’t think we’re trying to compete to do the most amount of sequencing. We’re putting our efforts into trying to figure out what to do with all the data. And that will be helpful for everybody.