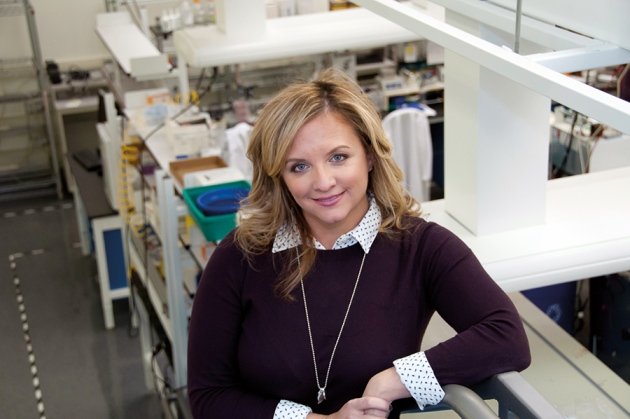 Staff scientist Stacey Gabriel co-authored 25 of the most highly cited papers worldwide in 2015.

Most research institutions are essentially collections of independent laboratories, each run by principal investigators who head a team of trainees. This scheme has ancient roots and a track record of success. But it is not the only way to do science. Indeed, for much of modern biomedical research, the traditional organization has become limiting.

A different model is thriving at the Broad Institute of MIT and Harvard in Cambridge, Massachusetts, where I work. In the 1990s, the Whitehead Institute for Biomedical Research, a self-governing organization in Cambridge affiliated with the Massachusetts Institute of Technology (MIT), became the academic leader in the Human Genome Project. This meant inventing and applying methods to generate highly accurate DNA sequences, characterize errors precisely and analyse the outpouring of data. These project types do not fit neatly into individual doctoral theses. Hence, the institute created a central role for staff scientists — individuals charged with accomplishing large, creative and ambitious projects, including inventing the means to do so. These non-faculty scientists work alongside faculty members and their teams in collaborative groups.

When leaders from the Whitehead helped to launch the Broad Institute in 2004, they continued this model. Today, our work at the Broad would be unthinkable without professional staff scientists — biologists, chemists, data scientists, statisticians and engineers. These researchers are not pursuing a tenured academic post and do not supervise graduate students, but do cooperate on and lead projects that could not be accomplished by a single academic laboratory.

Physics long ago saw the need to expand into different organizational models. The Manhattan Project, which during the Second World War harnessed nuclear energy for the atomic bomb, was not powered by graduate students. Europe's particle-physics laboratory, CERN, does not operate as atomized labs with each investigator pursuing his or her own questions. And the Jet Propulsion Laboratory at the California Institute of Technology in Pasadena relies on professional scientists to get spacecraft to Mars.

In biology, many institutes in addition to the Broad are experimenting with new organizational principles. The Mechanobiology Institute in Singapore pushes its scientists to use tools from other disciplines by discouraging individual laboratories from owning expensive equipment unless it is shared by all. The Howard Hughes Medical Institute's Janelia Research Campus in Ashburn, Virginia, the Salk Institute of Biological Sciences in La Jolla, California, and the Allen Institute for Brain Science in Seattle, Washington, effectively mix the work of faculty members and staff scientists. Disease-advocacy organizations, such as the ALS Therapy Development Institute in Cambridge, do their own research without any faculty members at all.

Each of these institutes has a unique mandate, and many are fortunate in having deep resources. They also had to be willing to break with tradition and overcome cultural barriers.

At famed research facilities of yore, such as Bell Labs and IBM Laboratories, the title 'staff scientist' was a badge of honour. Yet to some biologists the term suggests a permanent postdoc or senior technician — someone with no opportunities for advancement who works solely in a supervisor's laboratory, or who runs a core facility providing straightforward services. That characterization sells short the potential of professional scientists.

Although the work of staff scientists at the Broad Institute is sometimes covered by charging fees to its other labs, our faculty members would never just drop samples off with a billing code and wait for data to be delivered. Instead, they sit down with staff scientists to discuss whether there is an interesting collaboration to be had and to seek advice on project design. Indeed, staff scientists often initiate collaborations.

Naturally, tensions still arise. They can play out in many ways, from concerns over how fees are structured, to questions about authorship. Resolving these requires effort, and it is a task that will never definitively be finished.

“Faculty members would never just drop samples off with a billing code and wait for data to be delivered.”

In my view, however, the staff-scientist model is a win for all involved. Complex scientific projects advance more surely and swiftly, and faculty members can address questions that would otherwise be out of reach. This model empowers non-faculty scientists to make independent, creative contributions, such as pioneering new algorithms or advancing technologies. There is still much to do, however. We are working to ensure that staff scientists can continue to advance their careers, mentor others and help to guide the scientific direction of the institute.

As the traditional barriers break down, science benefits. Technologies that originate in a faculty member's lab sometimes attract more collaborations than one laboratory could sustain. Platforms run by staff scientists can incorporate, disseminate and advance these technologies to capture more of their potential. For example, the Broad Institute's Genetic Perturbation Platform, run by physical chemist David Root, has honed high-throughput methods for RNA interference and CRISPR screens so that they can be used across the genome in diverse biological contexts. Staff scientists make the faculty more productive through expert support, creativity, added capacity and even mentoring in such matters as the best use of new technologies. The reverse is also true: faculty members help staff scientists to gain impact.

Our staff scientists regularly win scientific prizes and are invited to give keynote lectures. They apply for grants as both collaborators and independent investigators, and publish regularly. Since 2011, staff scientists have led 36% of all the federal grants awarded for research projects at the Broad Institute (see ‘Staff-led grants’). One of our staff scientists, genomicist Stacey Gabriel, topped Thomson Reuters' citation analysis of the World's Most Influential Scientific Minds in 2016. She co-authored 25 of the most highly cited papers in 2015 — a fact that illustrates both how collaborative the Broad is and how central genome-analysis technologies are to answering key biological questions. 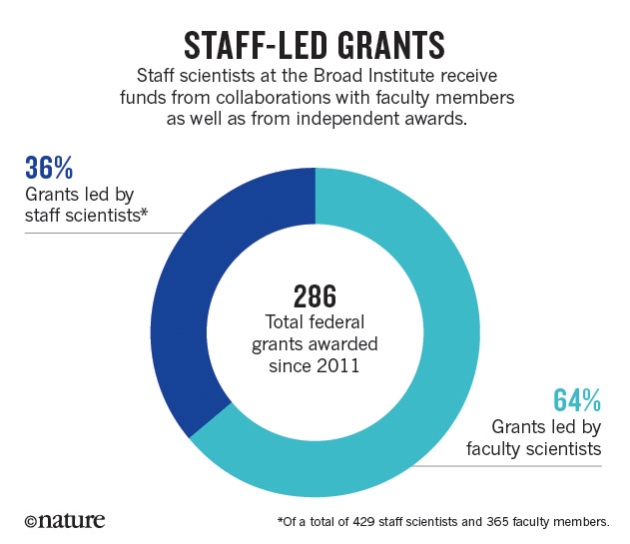 At the Broad Institute's Stanley Center for Psychiatric Research, which I direct, staff scientists built and operate HAIL, a powerful open-source tool for analysis of massive genetics data sets. By decreasing computational time, HAIL has made many tasks 10 times faster, and some 100 times faster. Staff scientist Joshua Levin has developed and perfected RNA-sequencing methods used by many colleagues to analyse models of autism spectrum disorders and much else. Nick Patterson, a mathematician and computational biologist at the Stanley Center, began his career by cracking codes for the British government during the cold war. Today, he uses DNA to trace past migrations of entire civilizations, helps to solve difficult computational problems and is a highly valued support for many biologists.

Why haven't more research institutions expanded the roles of staff scientists? One reason is that they can be hard to pay for, especially by conventional means. Some funding agencies look askance at supporting this class of professionals; after all, graduate students and postdocs are paid much less. In my years leading the US National Institute of Mental Health, I encountered people in funding bodies across the world who saw a rising ratio of staff to faculty members or of staff to students as evidence of fat in the system.

Faculty resistance is also a factor. I served as Harvard University's provost (or chief academic officer) for a decade. Several years in, I launched discussions aimed at expanding roles for staff scientists. Several faculty members worried openly about competition for space and other scarce resources, especially if staff scientists were awarded grants but had no teaching responsibilities. Many recoiled from any trappings of corporatism or from changes that felt like an encroachment on their decision-making. Some were explicitly concerned about a loss of access and control, and were not aware of the degree to which staff scientists' technological expertise and cross-disciplinary training could help to answer their research questions.

Institutional leaders can mitigate these concerns by ensuring that staff positions match the shared goals of the faculty — for scientific output, education and training. They must explain how staff-scientist positions create synergies rather than silos. Above all, hiring plans must be developed collaboratively with faculty members, not by administrators alone.

The Broad Institute attracts world-class scientists, as both faculty members and staff. Its appeal has much to do with how staff scientists enable access to advanced technology, and a collaborative culture that makes possible large-scale projects rarely found in academia. The Broad is unusual — all faculty members also have appointments at Harvard University, MIT or Harvard-affiliated hospitals. The institute has also benefited from generous philanthropy from individuals and foundations that share our values and believe in our scientific mission.

Although traditional academic labs have been and continue to be very productive, research institutions should look critically and creatively at their staffing. Creating a structure like that of the Broad Institute would be challenging in a conventional university. Still, I believe any institution that is near an academic health centre or that has significant needs for advanced technology could benefit from and sustain the careers of staff scientists. If adopted judiciously, these positions would enable institutions to take on projects of unprecedented scope and scale. It would also create a much-needed set of highly rewarding jobs for the rising crop of talented researchers, particularly people who love science and technology but who do not want to pursue increasingly scarce faculty positions.

A scientific organization should be moulded to the needs of science, rather than constrained by organizational traditions.