Physicists do it; computer scientists, mathematicians and economists do it. And this week, a who’s who of biomedical researchers and publishers is asking what it will take to convince life scientists to do it, too — release their work online before peer review and formal journal publication.

The impetus for the gathering, called ASAPbio (asapbio.org), is the growing frustration of some researchers at the slow pace of publishing in biology journals. The delay can take years, notes Ron Vale, a cell biologist at the University of California, San Francisco. That can seriously affect scientists’ careers because they don’t receive recognition for their work until it is published.

The solution, argues Vale, a co-organizer of ASAPbio, is for biologists to embrace preprints: pre-publication manuscripts posted online. These speed up dissemination, give students and postdocs tangible ways to cite their contributions to the literature, and stimulate discussion and ideas, he says — accelerating and improving life-sciences research.

There are signs that some biologists are ready to follow the lead of their colleagues in the physical sciences, where it is now routine for research to be submitted to the arXiv preprint server — founded 25 years ago — before publication. A life-sciences-only preprint server called bioRxiv started in 2013 and is rapidly growing in popularity (see ‘The growth of bioRxiv’), especially in data-intensive fields such as computational biology and genomics.

It has now seen more than 3,100 posted preprints, says John Inglis, the site’s co-founder and the executive editor of Cold Spring Harbor Laboratory Press in New York. Other journals, such as the online F1000Research, also encourage the posting of life-sciences manuscripts before peer review. 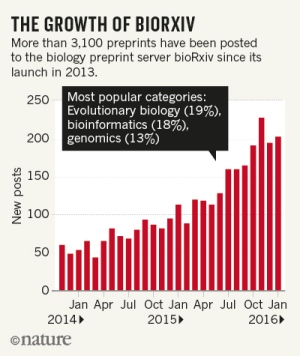 But preprints are still unfamiliar ground for biologists, Vale says. Leslie Vosshall, a neuro­biologist at the Rockefeller University in New York City, says that if such sites are to become popular in the life sciences, researchers will have to overcome common concerns — for example, that preprints could lead to scientists being scooped by competitors and missing out on credit for ideas. Vale and Vosshall say that such worries are misplaced. “I think most biologists don’t know about preprints, or if they do, they’ve heard of them at a very superficial level, to the point that they don’t really understand them very well,” Vale says.

“There’s no doubt that preprints are happening,” says Harold Varmus, a cancer biologist at Weill Cornell Medical College in New York City and another co-organizer of ASAPbio, held on 16–17 February at the Howard Hughes Medical Institute in Chevy Chase, Maryland. “But I don’t think we’ve ever had a conversation among all the constituents about what the effects will be.”

Both Vale and Vosshall think that preprints will become widely accepted only if the life-sciences community develops a consensus that preprint publication establishes a priority for any discovery. A discussion about that is at the top of ASAPbio’s agenda, and Vale co-authored an article on it, posted to the conference’s website last week. He has also tasked meeting attendees with considering how funding agencies and academic committees should view preprints when deciding whom to fund and hire.

Another concern is that quality might dip if life scientists flood preprint servers with non-peer-reviewed work. But supporters of preprint publication say that, if anything, researchers are more careful when their reputation rides on early work made public for all to critique.

The issue of whether a preprint could jeopardize the chances of a manuscript subsequently appearing in a peer-reviewed journal is also being resolved, says Inglis. Since bioRxiv launched, several journal publishers have changed their policies to expressly allow the publication of research previously posted to preprint servers.

Some scientists would like to see more- radical changes. Many make new data sets and hypotheses instantly and freely available online at repositories such as GitHub, figshare and Zenodo, and hope for crowdsourced peer review of their work. “That’s my utopian fantasy. It would be amazing to live in a world with all radically free data,” says Jessica Polka, a postdoctoral fellow at Harvard Medical School in Boston, Massachusetts, and co-organizer of the ASAPbio meeting. She says that preprints are “the most practical of all the transformative things that could be implemented”.

All of Vosshall’s preprint articles have also been published in conventional journals “through the excruciatingly slow process of peer review”, she notes. “Most of them don’t look any different. Which begs the question, why do we need journals any more?”