A stem-cell biologist has had an eye-opening success in his latest effort to mimic mammalian organ development in vitro. Yoshiki Sasai of the RIKEN Center for Developmental Biology (CBD) in Kobe, Japan, has grown the precursor of a human eye in the lab.

The structure, called an optic cup, is 550 micrometres in diameter and contains multiple layers of retinal cells including photoreceptors. The achievement has raised hopes that doctors may one day be able to repair damaged eyes in the clinic. But for researchers at the annual meeting of the International Society for Stem Cell Research in Yokohama, Japan, where Sasai presented the findings this week, the most exciting thing is that the optic cup developed its structure without guidance from Sasai and his team. 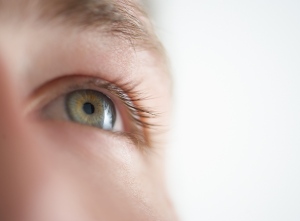 The human eye is a complex structure — but the cues to build it come from inside the growing cells.

“The morphology is the truly extraordinary thing,” says Austin Smith, director of the Centre for Stem Cell Research at the University of Cambridge, UK.

Until recently, stem-cell biologists had been able to grow embryonic stem-cells only into two-dimensional sheets. But over the past four years, Sasai has used mouse embryonic stem cells to grow well-organized, three-dimensional cerebral-cortex1, pituitary-gland2 and optic-cup3 tissue. His latest result marks the first time that anyone has managed a similar feat using human cells.

The various parts of the human optic cup grew in mostly the same order as those in the mouse optic cup. This reconfirms a biological lesson: the cues for this complex formation come from inside the cell, rather than relying on external triggers.

In Sasai’s experiment, retinal precursor cells spontaneously formed a ball of epithelial tissue cells and then bulged outwards to form a bubble called an eye vesicle. That pliable structure then folded back on itself to form a pouch, creating the optic cup with an outer wall (the retinal epithelium) and an inner wall comprising layers of retinal cells including photoreceptors, bipolar cells and ganglion cells. “This resolves a long debate,” says Sasai, over whether the development of the optic cup is driven by internal or external cues.

There were some subtle differences in the timing of the developmental processes of the human and mouse optic cups. But the biggest difference was the size: the human optic cup had more than twice the diameter and ten times the volume of that of the mouse. “It’s large and thick,” says Sasai. The ratios, similar to those seen in development of the structure in vivo, are significant. “The fact that size is cell-intrinsic is tremendously interesting,” says Martin Pera, a stem-cell biologist at the University of Southern California, Los Angeles.

An eye for an eye

The achievement could make a big difference in the clinic. Scientists have had increasing success in transplanting cells: last month, a group at University College London showed that a transplant of stem-cell derived photoreceptors could rescue vision in mice4. But the transplant involved only rod-shaped receptors, not cone-shaped ones, and would leave the recipient seeing fuzzy images. Sasai’s organically layered structure offers hope that integrated photoreceptor tissue could one day be transplanted. The developmental process could also be adapted to treat a particular disease, and stocks of tissue could be created for transplant and frozen.

Sasai emphasizes that the cells in the optic cup are “pure”, unlike those in two-dimensional aggregates, which may still contain embryonic stem cells. This reduces concerns that transplants of such cells might develop cancerous growths or fragments of unrelated tissues. “It’s like pulling an apple from a tree. You wouldn’t expect iron to be growing inside,” says Sasai. “You’d have no more reason to expect bone to be growing in these eyes.”

Masayo Takahashi, an ophthalmologist at the CBD, has already started transferring sheets of the retina from such optic cups into mice. She plans to do the same with monkeys by the end of the year. The big question is whether transplanted tissue will integrate into native tissue.

Clinicians and stem-cell biologists will also want to know just how easy it will be to repeat Sasai's success. Some at the meeting had already tried and failed to reproduce Sasai’s mouse experiment using human cells. “We need to know how robust, how reproducible it is,” says Smith.