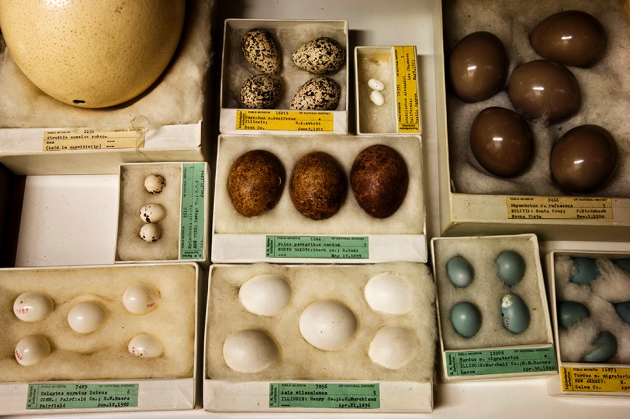 The Field Museum's extensive collection of eggshells helped to reveal the destructive power of the pesticide DDT.

The cabinets of the Field Museum in Chicago hold a collection of eggs that led to one of the most famous conservation discoveries of the twentieth century: that the pesticide DDT was causing widespread nesting failures in birds of prey.

But such specimen troves — which are used to identify species, track diseases and study climate change — have lost a valuable means of support. Last week, the US National Science Foundation (NSF) announced that it would indefinitely suspend a programme that provides funding to maintain biological research collections. The agency will honour current grants, but it is not accepting new proposals.

Plant collections left in the cold by cuts

“It’s surprising and disheartening,” says Christian Sidor, a palaeontologist at the University of Washington in Seattle and curator of vertebrate palaeontology at the Burke Museum of Natural History and Culture, also in Seattle. “It rattled through the entire museum yesterday.”

He and other researchers are worried because the NSF is one of the only public providers of funds to maintain specimen collections. It awards between US$3 million and $5 million a year in grants for such collections, equivalent to roughly 0.06% of the agency’s $7.5-billion budget for fiscal year 2016. (Individual grants are capped at $500,000.)

And although the phrase 'biological collections' might call to mind images of dusty museum drawers, these resources are as likely to include jars of fish larvae collected last week as they are pressed plants from 100 years ago. “Our fish collection, for example, is the repository for NOAA for the North Pacific,” said Sidor. NOAA — the US National Oceanic and Atmospheric Administration — uses the specimens collected each year  to assess fish abundance and set fishing quotas.

Learning from the past

The NSF says that it is evaluating the collections grant programme, and is thus unable to say whether the funding hiatus is temporary or permanent. “That depends on the results of the evaluation,” says Muriel Poston, director of NSF’s Division of Biological Infrastructure. The programme “could be reinstated, but potentially with a new focus”, she adds. (In the meantime, the NSF Division of Biological Infrastructure is soliciting feedback on the programme.)

That doesn’t satisfy scientists, many of whom took to Twitter to express their dismay. Felisa Smith, an ecologist at the University of New Mexico in Albuquerque, wrote: “What gives? Biological collections are the bedrock of a lot of contemporary science!”

Comparing modern plants or animals to preserved specimens can help scientists to understand how the climate is changing, how species have responded to past changes and how they are likely to behave in the future. Museum collections can also help scientists to determine a species’ historic range, which can illuminate whether a modern population is endangered or threatened.

Other researchers use collections to map and study invasive or otherwise harmful species, to identify insect pests, and to track species that carry human diseases. Rodent collections, for instance, helped researchers to determine the factors that led to an outbreak of hantavirus in the southwestern United States in 1993. The virus is spread by rodent droppings and can cause a fatal lung disease in humans.

As technology improves, Sidor says, scientists could use specimens for purposes that the original collectors could never have anticipated. For example, DNA sequencing of museum specimens has helped to identify previously unknown species — some collected before DNA was discovered.

Many museums are pushing to digitize their collections, which improves global access to information — indeed, the NSF's programme to support digitizing collections remains unchanged.  But “there’s no point digitizing if we don’t take care of the collections themselves”, says Barbara Thiers, director of the William and Lynda Steere Herbarium at the New York Botanical Garden. “You certainly can’t get any DNA out of an image.”