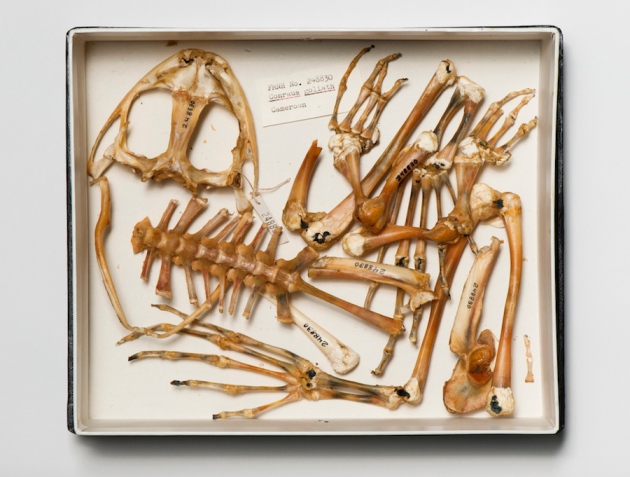 The bones of the goliath frog (Conraua goliath) help scientists to study modern populations of this species, which is threatened by hunting.

The US National Science Foundation (NSF) has quietly reinstated its programme to support biological specimen collections that are important for studying disease, invasive species, climate change and conservation. Scientists had protested against the agency's decision, announced in March, to suspend the programme pending an evaluation that is due later this year.

That evaluation is not complete. But the NSF now says that its programme — one of the only public funding sources for biological specimen troves — will accept new proposals beginning in 2017 for the 2018 fiscal year, and alternate years after that. An internal NSF evaluation of the programme will conclude in November 2016, and will be followed by an external evaluation due in September 2017. James Olds, NSF assistant director for biological sciences, says that the schedule for accepting new proposals may change depending on the results of the internal evaluation.

Still, researchers were enthusiastic about the agency's decision to restore funding. “I’m delighted,” says Barbara Thiers, director of the William and Lynda Steere Herbarium at the New York Botanical Garden. “I still think it’s regrettable to even lose one year,” she adds. “Even one year of no funding could very likely make the difference between whether a collection is saved or is lost.”

The NSF Division of Biological Infrastructure received “extensive feedback” after asking for comments on the programme, says Olds. Many professional societies wrote to the NSF urging support for biological collection grants — including groups representing the leaders of US natural-history collections, entomologists, vertebrate palaeontologists and scientists who maintain living microbe collections.

The NSF programme is “unique, and frankly irreplaceable”, the Entomological Society of America said in its letter to the agency, pointing to research on historical changes in invasive species that has been made possible by specimen collections. “Short of a time machine, there was no other way to acquire this information,” the society wrote.

The grant programme hands out between US$3 million and $5 million each year to researchers, which amounts to roughly 0.06% of the NSF's $7.5-billion budget for fiscal year 2016. That could change in the next funding cycle, Olds says: “The amount allocated for new awards that would be made in fiscal year 2018 will be informed by the evaluation.”