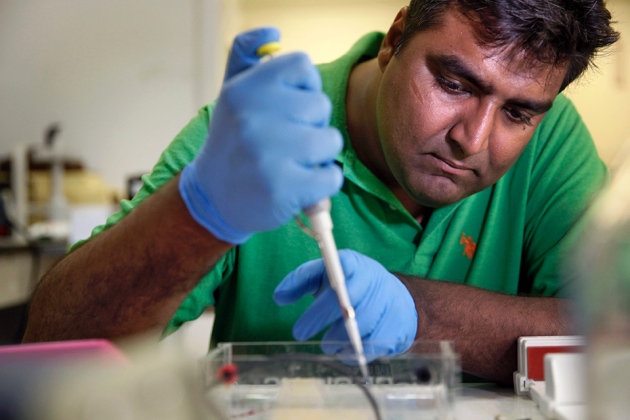 Biohackers such as Johan Sosa are exploring the creative potential of molecular biology.

A complete lack of formal scientific training has not kept Johan Sosa from dabbling with one of the most powerful molecular-biology tools to come along in decades.

Sosa has already used CRISPR, a three-year-old technology that makes targeted modifications to DNA, in test-tube experiments. Next week, he hopes to try the method in yeast and, later, in the model plant Arabidopsis thaliana.

Hailed for its simplicity and versatility, CRISPR allows scientists to make specific changes to a gene’s sequence more easily than ever before. Researchers have used CRISPR to edit genes in everything from bacteria to human embryos; the technique holds the potential to erase genetic defects from family pedigrees plagued by inherited disease, treat cancer in unprecedented ways or grow human organs in pigs. One researcher has even proposed modifying the elephant genome to produce a cold-adapted replica of the long-extinct woolly mammoth.

Such feats are beyond the reach of do-it-yourself (DIY) ‘biohackers’, a growing community of amateur biologists who often work in community laboratories, which typically charge a recurring fee for access to equipment and supplies. But CRISPR itself is not. Driven by an inventive spirit that inspires them to fiddle with yeast to alter the flavour of beer, build art installations out of bacteria or pursue serious basic-research questions, these amateurs cannot wait to try the technique.

“It’s, like, the most amazing tool ever,” says Andreas Stürmer, a biohacker and entrepreneur who lives in Dublin. “You could do it in your own home.”

Sosa is an IT consultant from San Jose, California, who took up biohacking as a hobby about three years ago, when he decided that he would like to grow organs — or maybe other body parts — in the lab. At first, he had no idea how unrealistic that goal was. “I just thought you take a bunch of stem cells and add stuff to them,” he says.

The challenge of manipulating living cells sank in as he began to read molecular-biology textbooks, attend seminars and teach himself laboratory techniques. He joined the BioCurious community lab in Sunnyvale, California.

Nature special: CRISPR — the good, the bad and the unknown

Sosa is not quite sure what he will do with CRISPR once he has mastered it. He might participate in a group effort at BioCurious to engineer yeast to produce casein, a protein found in milk, as a step towards making vegan cheese. That could involve using CRISPR to learn how proteins are chemically modified in different types of yeast. “Now we have this ability to do what the major labs have been doing all this time,” he says. “It’s very exciting.”

Artist Georg Tremmel, a research fellow in biological-data visualization at the University of Tokyo, has clear plans for CRISPR. He and his collaborators plan to ‘de-engineer’ genetically modified blue carnations sold in Japan by snipping out the inserted gene that turns the flower blue, thus reverting it to its ‘natural’, white state. They want audiences to ponder whether these doubly modified carnations should be deemed any different from unengineered plants with essentially the same genome.

So far, the hardest part of the project has not been using CRISPR, but growing the carnations in cell culture, Tremmel says. Another challenge will be getting permission to exhibit the work: although the blue carnations have been approved for sale in Japan, the de-engineered white carnations may need regulatory approval before they can be taken out of a laboratory.

In addition to its creative possibilities, CRISPR also poses potential for mischief. The US Federal Bureau of Investigation’s Bioterrorism Protection Team has painstakingly forged relationships with the biohacker community over the past few years and regularly reminds its members to keep an eye out for suspicious activity. Those concerns may be unnecessary, says Todd Kuiken, who studies science policy at the Wilson Center, a think tank in Washington DC. Most biohackers have benign goals, he says, such as creating rainbow-coloured bacteria or brewing distinctive beer.

There is also a tendency to overestimate what a typical DIY biologist can do, Kuiken adds. Reagents such as enzymes and antibodies are expensive, molecular-biology experiments are time-consuming and equipment that professional scientists take for granted is often beyond the means of individuals or community labs. And most community labs insist that their members work only with organisms that require the lowest level of biosafety precautions, which leaves human cells and most pathogens off the menu. In some parts of Europe, genetic engineering is illegal outside of professional facilities.

Given the constraints of a DIY lab, many hobbyists resort to CRISPR only when they need an extremely precise change to the genome, says Keoni Gandall, a 16-year-old biohacker and science-fair champion from Huntington Beach, California, who has been working with polymerase chain reaction machines and centrifuges at home for about three years. So far, Gandall has used CRISPR only while volunteering in a local university lab. “It’s pretty good,” he says.

One of the biggest fears surrounding CRISPR is that it could be used to create a genetic modification designed to spread through a population of organisms at an unnaturally fast rate. But Dan Wright, an environmental lawyer and DIY biohacker in Los Angeles, California, thinks that such a scenario is still beyond the ability of most amateurs. Constructing such a system would surpass the relatively simple tweaks that he and his colleagues are contemplating.

“It’s too difficult,” Wright says. “Just knocking out a gene in one plant is enough of a challenge for a biohacker space at this point.”