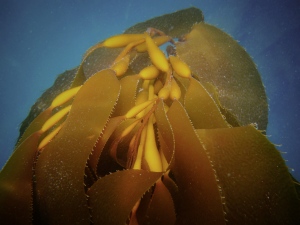 Seaweed could be a more sustainable source of biofuels than food crops like sugarcane or corn.

Bioengineers have devised a way to produce ethanol from seaweed, laying the groundwork for a biofuel that doesn't sacrifice food crops.

Yasuo Yoshikuni and his colleagues at the Bio Architecture Lab in Berkeley, California, engineered the bacterium Escherichia coli so that it could digest brown seaweed and produce ethanol. Their work is published in Science today1.

Yoshikuni says that his group chose brown seaweed because it was both sustainable and scalable. “Seaweed is already produced in huge quantities around the world without taking up any fresh water or arable land.” Brown seaweed also grows faster than red or green seaweed, with varieties such as the giant kelp, found off the coast of California, growing by up to a metre a day.

Many researchers are exploring ways to produce ethanol without using food crops such as sugar cane or maize (corn), and have turned to different feedstocks including switchgrass, the succulent plant jatropha, cyanobacteria and green algae. However, producing biofuels from sugar cane or maize not only detracts from food supplies, but also takes up huge areas of arable land. In the case of maize, more energy is required for growing and harvesting the crop than can be gained from the ethanol produced.

But producing biofuels from seaweed has so far proved difficult for bioengineers. Seaweed produces four kinds of sugars — laminarin, mannitol, alginate and cellulose. The biggest fraction in brown seaweed is alginate, which is a complex polysaccharide and tricky for microbes to digest.

“The carbohydrates are rather exotic compared to traditional terrestrial sources like corn or sugar cane,” says Yoshikuni. “Alginate is the key to unlocking the potential of brown seaweed.”

So using Vibrio splendidus, a marine microbe that can digest brown seaweed, Yoshikuni and his team isolated a biochemical pathway that breaks down alginate. They inserted the genes responsible into a strain of E. coli, which could then digest the alginate into simple sugars. The team also engineered the strain so that it could convert those sugars into ethanol, enabling the direct production of ethanol from brown seaweed. This strain of E. coli could, in theory, be engineered to produce a variety of other useful chemicals and fuels.

“This is very impressive work — it really is a groundbreaking achievement,” says Yong-Su Jin of the Institute for Genomic Biology at the University of Illinois in Urbana-Champaign, who also studies biofuel production from seaweed. Jin works with red seaweed, which is less abundant in the world’s oceans than brown seaweed, but “relatively easy to ferment using yeast”, he says, because of its lower alginate content2.

Stephen Mayfield, director of the San Diego Center for Algae Biotechnology at the University of California San Diego, calls the work “a very sophisticated engineering feat”, but adds “so far this has almost nothing to do with bioenergy production”. The main challenge in biofuels is not the ability to degrade complex carbohydrates and turn them into simple sugars, he explains: “It’s the rest of the steps involved in the lifecycle of growing and transporting the biomass.”

Scalability remains the big problem: people have farmed seaweed for hundreds of years, but only produce several thousand tonnes a year for food. Biofuel production would require billions of tonnes. “We still face a huge technical gap for large-scale cultivation,” says Jin.

That’s the next step, says Yoshikuni: this year his team will demonstrate the feasibility of their ethanol-production process at a pilot plant being built in Chile.