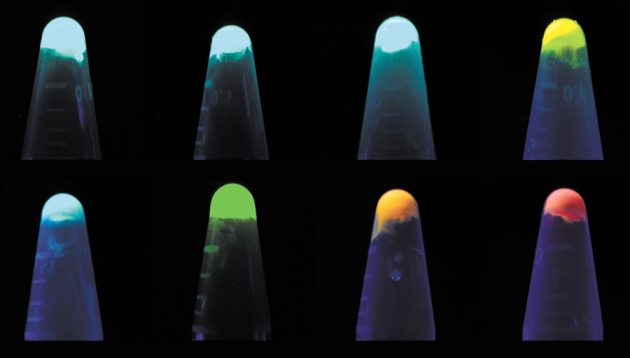 Some synthetic fluorescent proteins made by DNA2.0 are now freely available to researchers.

When DNA2.0, a company that synthesizes made-to-order genes, needed to conduct a few routine experiments using a fluorescent protein, its lawyers dug up more than 1,000 US patents covering their use. DNA2.0 decided to avoid the legal thicket by engineering several dozen fluorescent proteins from scratch. But the company, based in Menlo Park, California, was convinced that something had to change.

Last month, DNA2.0 deposited gene sequences encoding three of its fluorescent proteins into an open-access collection of recipes for DNA ‘parts’, molecular building blocks used to engineer organisms — often bacteria — to carry out specific functions. The company vows not to pursue its patent rights against anyone using the sequences.

Such moves are unusual among larger biotechnology companies, which tend to guard patents fiercely, but for DNA2.0 the choice was strategic, says Claes Gustafsson, the firm’s chief commercial officer. Synthetic biologists aim to bring engineering principles to bear on genetic manipulation, and the field’s success hinges on the creation of standardized parts that can be combined in predictable ways. The company wants to create incentives for other synthetic-biology firms to design custom organisms for which DNA2.0 can synthesize the parts. “We have a lot of customers in small biotech companies,” Gustafsson says, “and the intellectual-property situation for them is just a nightmare.”

Easing that situation will be a key point of discussion next week at the Sixth International Meeting on Synthetic Biology, to be held in London by the BioBricks Foundation, a non-profit organization based in Cambridge, Massachusetts. As patent disputes heat up in some parts of the industry, synthetic biologists are weighing alternatives such as copy­rights, which are more straightforward than patents, and open-source parts registries.

Open access to validated molecular components is crucial to the field’s success, says Drew Endy, a synthetic biologist at Stanford University in California. Endy says that synthetic biologists are similar to software engineers, with the genetic code as their programming language. The software industry has favoured open-source approaches and copyright protections, because inventions often come faster than patents can be acquired.

The same holds for synthetic biology: if every genetic building block comes with a patent attached, cellular engineers may end up negotiating legal minefields. Few firms will sue a scientist who infringes a patent in the course of academic research, but young synthetic-biology companies are vulnerable.

Two years ago, the BioBricks Foundation borrowed elements from the open-source software movement to develop a public agreement for designers of synthetic-biology parts. But the 708 parts in the BioBricks open-source collection come from only three donors: DNA2.0, Endy and Ginkgo BioWorks, a synthetic-biology company in Boston, Massachusetts. Commercial use of some of the highest-impact parts is still kept under lock and key by industry or academic labs.

Mark Fischer, a copyright lawyer at Duane Morris in Boston, and a key architect of the BioBricks agreement, says that it is too soon to judge the project. He says that DNA2.0’s contribution to the registry is a sign that the movement is taking off. “I think we’re now at the dawn of that happening,” says Fischer, who also helped to pioneer open-source software agreements.

The open-source push in synthetic biology has also rekindled talk of copyrighting engineered DNA sequences. Copyrights protect certain types of work from being reproduced without permission, but users may substantially modify those creations. The United States started granting such protections to computer programs in the 1960s.

DNA2.0 plans to find out whether DNA sequences can also be shoehorned into the framework. Last year, the company petitioned for US copyright protection of the DNA sequence for a fluorescent green protein, without success, but has launched an appeal. Its plan, says Christopher Holman, a law professor at the University of Missouri–Kansas City who is working with DNA2.0, is to pursue the appeal until the issue is heard in court.

Copyrights are cheaper, easier alternatives to patents, says Endy. They cost $35 to register, as opposed to the $100,000 in legal fees and administrative costs that DNA2.0 says it pays for each patent application it files. But Endy worries about the duration of copy­right protections, which can last up to 120 years; patents, by contrast, expire after 20.

And patents are still useful for some inventions, says Gustafsson. DNA2.0 will continue to patent some of its engineered genes and proteins. “We play in the same system as everyone else,” says Gustafsson. “But we also want to increase our market size.”