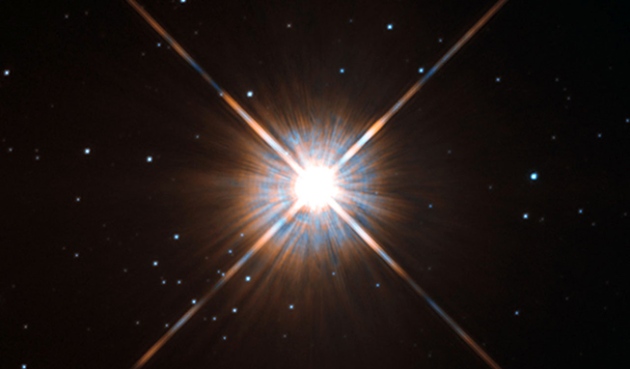 The star system α Centauri is more than 4 light years from the Sun.

Space has long fascinated humans, but few have dared to initiate an interstellar space programme. Now a coalition of entrepreneurs and scientists aims to design a fleet of laser-powered spacecraft that could reach α Centauri, the star system closest to the Solar System, in just two decades. The group envisions probes that could complete that journey — a distance of 4.37 light years (1.34 parsecs) — at 20% the speed of light.

“For the first time in human history we can actually do more than observe the stars,” said Yuri Milner, a Russian Internet billionaire who is funding the initiative, at a 12 April press conference in New York. “We can reach them.”

Called Breakthrough Starshot, the programme is based on an idea that has been around for decades: the solar sail. The theory is that a lightweight space sail could harness the momentum carried by photons in order to travel without fuel.

The Breakthrough Starshot team is betting that a burst of concentrated lasers, fired from the ground, could rapidly accelerate a mobile-phone-sized device equipped with microelectronics and a tiny sail — providing much more energy than could be harnessed from the Sun. Whereas NASA’s plutonium-powered New Horizons spacecraft took nine years to reach Pluto, the “nanocraft” envisioned by Breakthrough Starshot would pass by the dwarf planet and exit the Solar System in three days.

The project's initial US$100-million budget covers only research and development of such a spacecraft. But Breakthrough Starshot's ultimate goal is to demonstrate proof of concept for an international programme that would send a fleet of nanocraft into space. Doing so would require the group to surmount enormous scientific and engineering challenges in developing the necessary laser technology, materials and communications systems.

Advocates are optimistic, citing recent advances in microelectronics and photonics. “It’s an ambitious project, but we don’t see any showstoppers, any dealbreakers, based on fundamental physics,” says Avi Loeb, a theoretical physicist at Harvard University in Cambridge, Massachusetts, who advises the Breakthrough Prize Foundation — an organization that receives funding from Milner. “Basically, the success of this project depends on us.”

Breakthrough Starshot would launch its probes into space on a conventional rocket, and release them into Earth orbit. The probes would then open up their sails, and an array of high-powered lasers would blast one into motion every day or two. Each spacecraft could be equipped with sensors to study the planets or asteroids that they pass; the data would then be transmitted back to Earth by tiny on-board lasers.

Perhaps the biggest question of all — even assuming that some of these spacecraft would survive to reach α Centauri and transmit their data back — is how much scientists would learn from the feat. The project would certainly spur innovation, but would have to compete scientifically against a new generation of space-based telescopes, says Scott Pace, director of the Space Policy Institute at George Washington University in Washington DC.

“If I was wearing purely a science hat, and I had a marginal dollar to spend, I would spend it on an exoplanet telescope,” Pace says.

Still, Breakthrough Starshot has attracted high-profile support from the likes of Facebook founder Mark Zuckerberg and physicist Stephen Hawking, who was present at the 12 April press conference. “What makes us human is transcending our limits,” Hawking said. “How do we transcend these limits? With our minds and our machines.”

The Starshot project will be led by Pete Worden, who retired as director of NASA’s Ames Research Center in California last year. Worden said that the group has already reached out to NASA, the European Space Agency and other space agencies to build support and perhaps partnerships. Achieving Breakthrough Starshot's goals would be comparable in scale and cost to building and operating the Large Hadron Collider at CERN, Europe's particle-physics lab near Geneva, Switzerland.

The entire programme will be open to outside collaborations, and all of the data will be published openly. Indeed, Loeb says that its success will depend on engagement by the broader scientific community. “Our goal is to get people from all over the world involved, especially young people who will be around when we get there,” Loeb says.