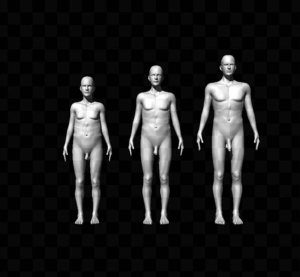 Researchers report today that penis size does matter to women — though within limits. The finding suggests that women’s preferences could have fuelled the evolution of the human male penis, which is longer and thicker than that of any other primate.

Male genitalia evolve quickly. They diversify earlier than other physical traits, with a wide variation in size and shape across the animal kingdom that can reveal a species’ evolutionary pressures. Biologists have puzzled, therefore, over what factors might have caused the human penis to become so large.

Now, a study published in the Proceedings of the National Academy of Sciences finds that women consider penis size and height equally when judging men’s attractiveness, but both exhibit diminishing returns with greater size and are less important than a masculine body type1.

The findings add to a debate that began in 1966 when sexuality researchers William Masters and Virginia Johnson declared penis size to be unimportant to most females. Subsequent studies of women’s preferences, based on questionnaires or line drawings, have reported conflicting results.

For the latest study, researchers developed computer-generated images of males that varied independently in three factors: height, shoulder-to-hip ratio and penis length. A sample of 105 heterosexual Australian women each viewed life-sized projections of 53 of the images and rated their sexual attractiveness.

Too big to succeed?

The data showed an upside-down-U-shaped curve for each trait. The women considered taller men with a more masculine body type (indicated by a larger shoulder-to-hip-size ratio) and longer penis to be more attractive, but not without limits — there were diminishing returns for extreme size, and men with substantially larger-than average features were not found much more attractive than those with only slightly above-average features.

Study leader Brian Mautz, a biologist now at the University of Ottawa in Canada, says that there seems to be a ceiling effect for each trait — a point of theoretical peak attractiveness, beyond which women’s ratings will begin to decline. The team’s model predicts that the most attractive penis would measure 12.8–14.2 centimetres in its flaccid state. Mautz notes that this ideal size is relatively closer to the population average (of 9 centimetres) than are the predicted ideals for the other traits, implying that women prefer more extreme shoulder-to-hip ratio and tallness but less extreme penis size.

Other researchers say that the findings are an important first step but fall short of showing a role for sexual selection in the evolution of human penis size, a point that Mautz concedes. “It's hard to extrapolate much from the data,” he says. ”More work needs to be done to connect the dots.”

Alan Dixson, a primatologist at Victoria University of Wellington in New Zealand, says that the research should be broadened to include women from other countries and cultures — especially those from indigenous populations in which full clothing is not usually worn.

More crucially, female preference needs to be tied to reproductive success, says William Eberhard, an evolutionary biologist at the University of Costa Rica in San Pedro. Women may prefer a large penis when choosing a partner, but that doesn’t necessarily translate into more offspring who carry those genes.

Still, the findings have immediate implications for sexual medicine and counselling, says Geoffrey Miller, an evolutionary psychologist at New York University. “This research will allow an uncomfortable subject to become a legitimate topic of discussion.”