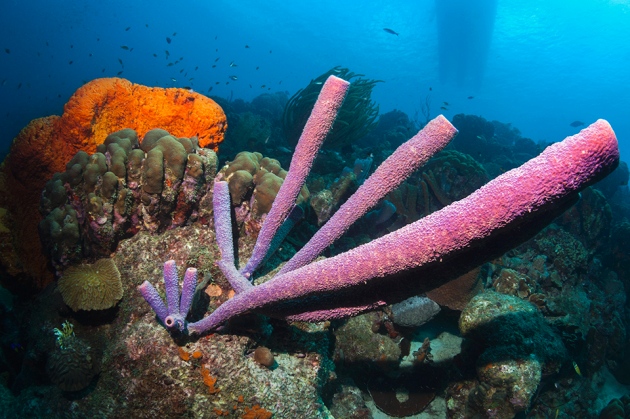 The debate over which lineage came first — sponges (pictured) or comb jellies — is far from settled.

Evolutionary biologists have battled for years over which animal lineage came first — sponges or comb jellies. The answer could transform how scientists understand the evolution of the human nervous system, digestive system and other complex traits.

A study published on 16 March in Current Biology, sides with the sponges, using an unprecedented array of genetic data to deduce that they were the first to branch off from the animal tree of life1. Sponges are simple creatures that lack a head, nerves and guts, so the conclusion makes intuitive sense. But big data doesn’t necessarily lead to better answers, some researchers warn.

“They’ve got a large data set, but almost certainly this is not the final word,” says David Hillis, an evolutionary biologist at the University of Texas at Austin who was not involved with the project. “This is just such a tough problem to solve.”

Peering back through 600 million years of transformation is hard. It seems that every animal descends from ancestors on one of five branches near the base of the tree. But these five groups look very different from one another today. There are sponges, comb jellies, cnidarians (including sea anenomes, corals and jellyfish), bilaterally symmetrical animals (such as humans and clams) and obscure, microscopic worms called placozoans.

Battle of the branches

For the better part of the past century, zoologists arranged these branches according to their judgements of what was simple and what was complex. Sponges fell to the bottom branch, and bilaterally symmetrical animals resided higher up. But in 2008, a genetic analysis published in Nature put comb jellies, rather than sponges, near the root of the evolutionary tree2.

This arrangement rattled evolutionary biologists because it upended the idea that animal complexity increased over time. It implied that nerves and other characteristics evolved independently in different lineages, and were subsequently lost in sponges. Since then, studies have supported or contradicted the rearrangement, but all have been plagued by problems.

In the most recent study1, the authors attempt to resolve one of the biggest challenges in building evolutionary trees based on DNA comparisons. Some genomes evolve faster than others, and fast-evolving genomes from unrelated animals can converge on a similar sequence. “By chance, lineages accumulate genetic similarities not due to a shared history but due to random change,” explains Michaël Manuel, an evolutionary biologist at the Institute of Biology Paris-Seine, and the study’s senior author.

This problem is called long-branch attraction, because mathematical models depict genetic changes as additional lengths on the branches of the diagrams they produce. Long branches can cluster together on a tree as a result of these convergences, or because their genetic sequences are so unlike others in the tree. Either way, the clustering suggests that two lineages are related when they’re not. Manuel suspects that the long branches of non-animals such as fungi attract the comb-jelly lineage because, for unknown reasons, comb-jelly genomes have accumulated an unusual number of changes over time.

To skirt such long-branch attraction, Manuel and his colleagues analysed 1,719 genes from an unparalleled range of species. It took computing power from Canada, Germany, Belgium and France to crunch the numbers. The team also tested several mathematical models that accounted for biological phenomena, including the fact that certain genetic changes are more likely than others. They chose a model called CAT, partly because of how well it reproduced sections of the animal tree that have already been confirmed.

The results from the CAT model placed sponges on the earliest branch of the animal family tree. Some other models that the team used had put comb jellies at the base. “The fact that the results flip-flop with different models is a bad sign,” says Hillis, who was not involved with the work.

Casey Dunn, an evolutionary biologist at Brown University in Providence, Rhode Island who also was not involved in the study, agrees. “Unfortunately, this is telling us that adding more species data isn’t moving the needle on the problem.”

In the future, Hillis suggests, biologists should explore genomic data that are less prone to long-branch attraction, because the chance of random convergence is lower. For instance, genes rarely insert themselves into other genes, but it happens. Hillis concedes that finding a solution will not be easy. “But this tree really matters,” he says. “It changes how we understand major things that happened in evolution.”