Despite many good intentions and initiatives, gender inequality is still rife in science. Although there are more female than male undergraduate and graduate students in many countries1, there are relatively few female full professors, and gender inequalities in hiring2, earnings3, funding4, satisfaction5 and patenting6 persist.

One focus of previous research has been the 'productivity puzzle'. Men publish more papers, on average, than women7, although the gap differs between fields and subfields. Women publish significantly fewer papers in areas in which research is expensive8, such as high-energy physics, possibly as a result of policies and procedures relating to funding allocations4. Women are less likely to participate in collaborations that lead to publication and are much less likely to be listed as either first or last author on a paper7. There is no consensus on the reasons for these gender differences in research output and collaboration — whether it is down to bias, childbearing and rearing9, or other variables.

It has been suggested that what women lack in research output they make up for in citations, particularly in fields with 'greater career risk'8 — that is, fields with long lags between doctoral education and securing a faculty position, such as ecology. But again, there is no consensus on the relative impact of women's work compared to men's.

The present state of quantitative knowledge of gender disparities in science has been shaped primarily by anecdotal reports and studies that are highly localized, monodisciplinary and dated. Furthermore, these studies take little account of the rise in collaborative research and other changes in scholarly practices. Effective policy cannot be built on such foundations.

We find that in the most productive countries, all articles with women in dominant author positions receive fewer citations than those with men in the same positions. And this citation disadvantage is accentuated by the fact that women's publication portfolios are more domestic than their male colleagues — they profit less from the extra citations that international collaborations accrue. Given that citations now play a central part in the evaluation of researchers, this situation can only worsen gender disparities (see ‘Gender, output, collaboration and citation’).

Scientists in these 30 countries contributed the largest shares of the more than 5 million papers published between 2008 and 2012. Explore below to discover what proportion of output was contributed by women and men, and how the gender of lead authors influenced the citation of papers from lone authors, national and international collaborations.

In our view, the scale of this study provides much-needed empirical evidence of the inequality that is still all too pervasive in science. It should serve as a call to action for the development of higher education and science policy.

Men dominate scientific production in nearly every country; to what extent varies by region (see 'Gender and research output'). We probed the proportion of each gender's output by comparing the proportion of identified authorships for each gender on any given paper. For example, for a paper with eight authorships, of which six were assigned a gender, each of the authorships would be granted one-sixth of a paper. These gendered fractions were then aggregated at the levels of countries and disciplines. It should be stressed that these are authorships, not individuals, therefore no author name disambiguation was necessary (see Supplementary Information). 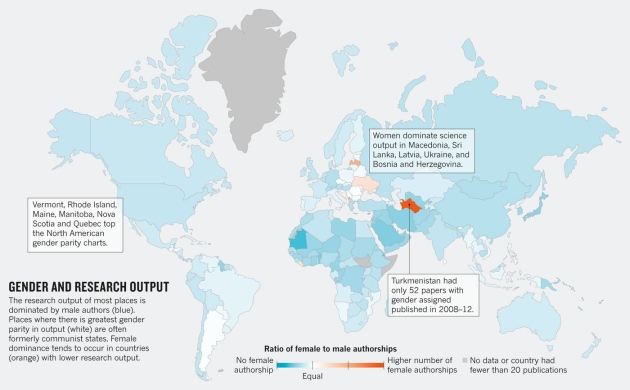 Click here for an interactive version of this map

Globally, women account for fewer than 30% of fractionalized authorships, whereas men represent slightly more than 70%. Women are similarly underrepresented when it comes to first authorships. For every article with a female first author, there are nearly two (1.93) articles first-authored by men.

South American and Eastern European countries demonstrate greater gender parity. Eastern Europe may support the idea that communist and formerly communist states may have greater gender balance than other countries. Only nine countries had female dominance in terms of proportion of authorships, and five of these (Macedonia, Sri Lanka, Latvia, Ukraine, and Bosnia and Herzegovina) had more than 1,000 articles in our analysis. In other words, female authorship is more prevalent in countries with lower scientific output.

Countries with more than 1,000 papers and high degrees of male dominance include, unsurprisingly (in order of output): Saudi Arabia, Iran, Japan, Jordan, the United Arab Emirates, Cameroon, Qatar and Uzbekistan. US states with more than 1,000 articles with a gender assigned and high male dominance include New Mexico, Mississippi and Wyoming. The US states and Canadian provinces that are closest to achieving gender parity (and have more than 1,000 articles) include Vermont, Rhode Island, Maine, Manitoba, Nova Scotia and Quebec. Again, some of these states and provinces are among the lowest ranking in terms of scientific output.

And what of impact? We analysed prominent author positions — sole authorship, first-authorship and last-authorship. We discovered that when a woman was in any of these roles, a paper attracted fewer citations than in cases in which a man was in one of these roles (see 'Lead-author gender and citation'). The gender disparity holds for national and international collaborations. 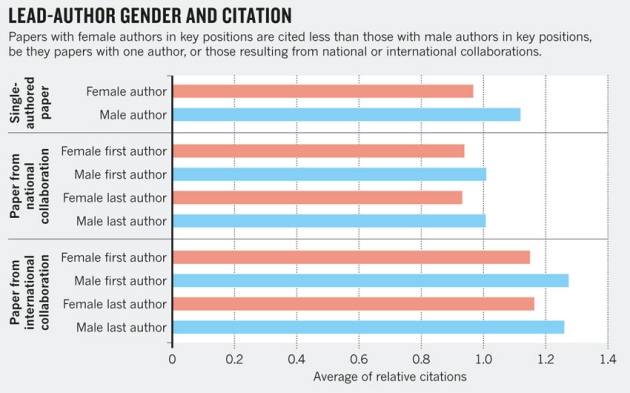 There are several limitations to the conclusions that can be drawn from our findings. Foremost among them is that age indisputably has a role — perhaps even the major role — in explaining gender differences in scientific output, collaboration and impact. As is well known, the academic pipeline from junior to senior faculty leaks female scientists, and the senior ranks of science bear the imprint of previous generations' barriers to the progression of women. Thus it is likely that many of the trends we observed can be explained by the under-representation of women among the elders of science. After all, seniority, authorship position, collaboration and citation are all highly interlinked variables.

Another key limitation is that authorship of papers is only one of many indicators of research activity. Our analysis includes only journal articles, not books, conference proceedings, database construction or code, for example. Also problematic is the lack of universal norms associated with authorship attribution and position. For example, it is possible that some women do not appear as authors despite their contribution to research activities, and there are fields in which authors are listed alphabetically. There is also a concern that gender-assignment techniques can introduce errors (see Supplementary Information). We have tried to mitigate this with validation exercises, but there is always room for improvement.

Future research should drill into questions raised by this analysis. What distinguishes pockets of anomalously high parity? Are there characteristics of the work itself that contribute to disparities in output and citation? Are there other, perhaps less quantitative, aspects of scholarship that reveal a different story regarding gender balance in science? Furthermore, is there anything intrinsic to certain disciplines or cultures that make them more or less appealing to scientists of a particular gender?

Those of a misogynistic bent might read this study as confirming their view that women's research is weaker than men's and there is less of it. Such a simplistic interpretation dismisses the vast implications embedded in these data. Our study lends solid quantitative support to what is intuitively known: barriers to women in science remain widespread worldwide, despite more than a decade of policies aimed at levelling the playing field. UNESCO data show10 that in 17% of countries an equal number of men and women are scientists. Yet we found a grimmer picture: fewer than 6% of countries represented in the Web of Science come close to achieving gender parity in terms of papers published.

For a country to be scientifically competitive, it needs to maximize its human intellectual capital. Our data suggest that, because collaboration is one of the main drivers of research output and scientific impact, programmes fostering international collaboration for female researchers might help to level the playing field.

That said, if there were a simple solution or programme that could improve matters, this issue would already be solved. Unfortunately, behind this global imbalance lie local and historical forces that subtly contribute to the systemic inequalities that hinder women's access to and progress in science. Any realistic policy to enhance women's participation in the scientific workforce must take into account the variety of social, cultural, economic and political contexts in which students learn science and scientific work is performed. Each country should carefully identify the micro-mechanisms that contribute to reproducing the past order. No country can afford to neglect the intellectual contributions of half its population.