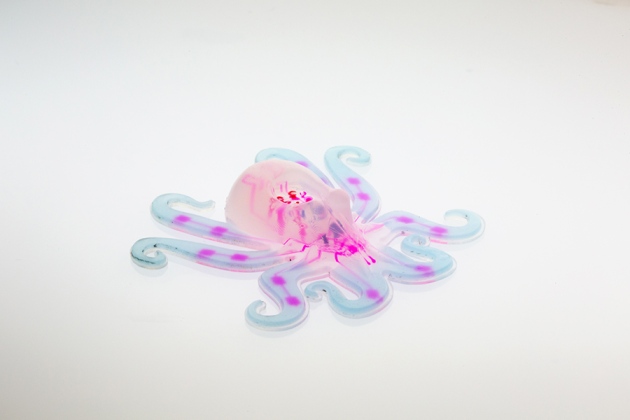 A squishy octopus-shaped machine less than 2 centimetres tall is making waves in the field of soft robotics. The ‘octobot’ described today in Nature1 is the first self-contained robot made exclusively of soft, flexible parts.

Interest in soft robots has taken off in recent years, as engineers look beyond rigid Terminator-type machines to designs that can squeeze into tight spaces, mould to their surroundings, or handle delicate objects safely. But engineering soft versions of key parts has challenged researchers. “The brains, the electronics, the batteries — those components were all hard,” says roboticist Daniela Rus at the Massachusetts Institute of Technology in Cambridge. “This work is new and really exciting.”

The octobot is made of silicone rubber. Its ‘brain’ is a flexible microfluidic circuit that directs the flow of liquid fuel through channels using pressure-activated valves and switches. “It’s an analogy of what would be an electrical circuit normally,” says engineer Robert Wood at Harvard University in Cambridge, Massachusetts, one of the study’s leaders. “Instead of passing electrons around, we're passing liquids and gases.”

Valves and switches in the robot’s brain are positioned to extend the arms in two alternating groups. The process starts when researchers inject fuel into two reservoirs, each dedicated to one group of four arms. These reservoirs expand like balloons and push fuel through the microfluidic circuit. As fuel travels through the circuit, changes in pressure close off some control points and open others, restricting flow to only one half of the system at a time. As that side consumes fuel, its internal pressure decreases, allowing fuel to enter the other side — which then pinches off the first side, and so on.

The robot's brain talks to its limbs through 3D-printed channels embedded in the body. To create the body, researchers poured silicone polymers into an octopus-shaped mould. Then, using a 3D printer, they injected special inks that maintained their form and position in the surrounding polymer. The scientists heated the octobot to cure its structure, which also caused the ink to evaporate — leaving behind a hollow network that infiltrates the octobot's limbs and links to its brain.

Many soft robots are tethered to compressed air tanks that provide power, but this can restrict their range of motion. Wood and his colleagues take a different approach, using a chemical reaction to power the octobot.

Their fuel is a 50% hydrogen peroxide solution. When this is exposed to platinum infused into two segments of the robot's internal network, it rapidly decomposes into a greater volume of water and oxygen. The resulting burst of pressurized gas in each segment inflates and extends one set of arms, eventually exiting through exhaust vents.

“The combination of the microfluidics with the chemical reaction is really interesting,” says Cecilia Laschi, a roboticist at the Sant'Anna School of Advanced Studies in Pisa, Italy. “It's a completely new and different way to see soft robots.”

The octobot currently runs for up to 8 minutes on 1 millilitre of fuel. It is not designed to perform any particular task, and doesn’t mimic the motions of a real octopus. Instead, it demonstrates the technology, says Wood. In the future, more sophisticated microfluidic circuits might improve endurance, and allow more complex movements when paired with the appropriate limb designs, the authors suggest.

“Now what needs to be worked out is how to reprogram the robots to perform different actions, to respond to the environment, and not just perform a pre-programmed sequence,” says materials engineer Robert Shepherd at Cornell University in Ithaca, New York. Shepherd is especially keen to see whether souped-up microfluidic circuits can be combined with flexible sensors to make smarter soft robots that are better able to adapt to changing conditions.