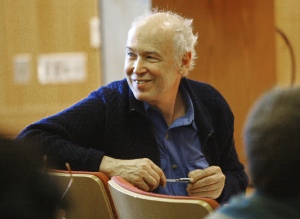 Pierre Deligne received the 2013 Abel Prize for his work connecting algebra and geometry.

It has been four decades since Belgian mathematician Pierre Deligne made his most celebrated contribution to mathematics, but that work has now earned him the Abel Prize, one of the most prestigious awards in the field.

Speaking by webcast, Deligne, 68, said he was surprised this morning to receive the call that gave him the news that he had won. Although he has received major prizes before, he said that he does not spend much time wondering about when the next one will come. “The nice thing about mathematics is doing mathematics,” he said. “The prizes come in addition.”

The Abel Prize has been given annually since 2002 by the Norwegian Academy of Science and Letters in Oslo. It is named after nineteenth-century Norwegian mathematician Niels Henrik Abel, and is worth 6 million kroner (US$1 million).

The academy has rewarded Deligne “for seminal contributions to algebraic geometry and for their transformative impact on number theory, representation theory, and related fields”.

Deligne, who works at the Institute for Advanced Study (IAS) in Princeton, New Jersey, has made “many different contributions that have had a huge impact on mathematics for the past 40–50 years”, says Timothy Gowers, a mathematician at the University of Cambridge, UK, who delivered the award address in Oslo today.

“Usually mathematicians are either theory builders, who develop tools, or problem-solvers, who use those tools to find solutions,” says Peter Sarnak, another mathematician at the IAS. “Deligne is unusual in being both. He’s got a very special mind.”

Algebraic geometry explores 'algebraic varieties' — shapes that are sets of solutions to algebraic equations. For example, a circle of radius r can be described by the equation x2 + y2 = r2. Algebraic geometry has proved to have deep connections to many areas of mathematics.

Deligne's most famous result relates to the Weil conjectures, which were proposed by French mathematician André Weil in 1949. These four conjectures specify some of the properties of zeta functions, which can be used to calculate how many of the points in algebraic varieties have integer coordinates (in the case of the circle, that would mean that x and y are both whole numbers).

The first three Weil conjectures were proved to be true in the 1960s, but the fourth and hardest remained open until Deligne proved it in 1974. That fourth conjecture is analogous to a problem called the Riemann hypothesis, which concerns the distribution of prime numbers and is “the most famous unsolved problems in mathematics”, says Gowers. The connection with the Riemann hypothesis is in itself an indication of the significance of Deligne’s proof.

Gowers says that Deligne's proof “completed a long-standing programme” in mathematics. “By solving that,” adds Sarnak, “he solved a whole lot of things at once.” For example, the solution also proved a long-standing, recalcitrant conjecture by the Indian mathematician Srinivasa Ramanujan (1887–1920).

Deligne built on the work of his mentor, German-born mathematician Alexander Grothendieck, who proved the second Weil conjecture in 1965. That work introduced a concept called l-adic cohomology, which his student Deligne used to find the final proof.

In 1978, Deligne’s proof won him the Fields Medal, the original ‘mathematics Nobel’. Since completing the work that secured his reputation, he has applied tools including l-adic cohomology to extend algebraic geometry and to relate it to other areas of maths.

“Even if you took away his most famous result on the Weil conjectures”, says Gowers, “you would still be left with a great mathematician.”

Deligne has not yet thought about how he will spend the money that came with his Abel Prize, but he says that he would like to find a way to make it useful for mathematics. “To some extent, I feel that this money belongs to mathematics, not to me.”