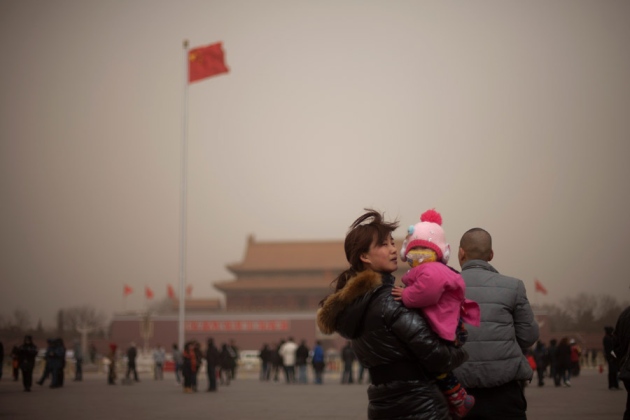 High levels of smog in Beijing are an ongoing public-health problem.

For people racked by the dreaded ‘Beijing cough’, it is all too clear that particles in the city’s thick smogs pose a public-health problem. But much less clear is the impact — or even the identity — of the microbes that also drift through the brown haze.

Chinese researchers have now used genome sequencing to identify about 1,300 different microbial species in an exceptionally soupy smog that hit Beijing in January 2013 (ref. 1). Reassuringly, most of the microbes they found are benign — but a few are responsible for allergies and respiratory disease in humans. And on days with heavier pollution, the proportion of DNA from these allergens and pathogens increased, suggesting that they might present an additional health threat to vulnerable groups, such as older people or those with weakened immune systems.

Surveys of airborne microbes have long relied on culturing samples in the lab, a method that can easily miss key species. In the past few years, researchers have looked at the microbial genomes found in air to identify broad families or genera of bacteria — an approach called metagenomics. But this is the first time that a survey has drilled down to pinpoint particular species of microbes in air, which is important for assessing their pathogenic potential, says Ting Zhu, a biologist at Tsinghua University, Beijing, who was part of the team that performed the latest study. “It’s a proof of principle that one can extract and identify these microbes at the species level,” says Zhu. “It adds to our understanding of what we inhale every day.”

The scientists took 14 air samples over 7 consecutive days and filtered out two types of particles: those measuring less than 2.5 micrometres across, and those up to 10 micrometres across, known as PM2.5 and PM10, respectively. On some days during the experiment, Beijing’s PM2.5 levels topped 500 micrograms per cubic metre — some 20 times the World Health Organization’s guideline limits.

The scientists extracted and sequenced DNA from the samples, and compared the results with a large gene database. The most abundant species identified was Geodermatophilus obscurus, a common soil bacterium. But they also found Streptococcus pneumoniae, which can cause pneumonia; Aspergillus fumigatus, a fungal allergen; and a range of other bacteria typically found in faeces. The proportion of DNA from these species increased by 2–4 times on the smoggiest days, although the samples probably included material from dead cells too, “so we don’t know if they are still viable”, says Zhu. The researchers suggest that clinical studies could look for the same microbes in the sputum of patients with respiratory tract infections, to assess whether smoggier days lead to more infections. 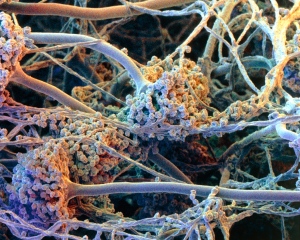 A scanning electron micrograph of the fungus Aspergillus fumigatus, one of the potentially harmful species that Chinese researchers have identified in Beijing smog samples.

Andrea Franzetti, a microbiologist at the University of Milan–Bicocca, Italy, says that the make-up of the microbial community in Beijing's air is broadly in line with a similar survey of airborne bacteria that his team conducted in Milan2. “What’s new is the high number of sequences,” he says. That helps to quickly pinpoint bacteria that might have worrying health effects, allowing microbiologists to target them for further study. “There is increasing evidence that bacteria could play an important role in the health effects [of airborne particles],” says Franzetti.

Even so, “the PM2.5 and PM10's are way more problematic than any of the microbes,” notes Norman Pace, a microbiologist at the University of Colorado Boulder, who led a sequencing-based survey of microbes in New York subway air3. The technique might be more revealing in locations such as hospitals, where there are greater concerns about airborne pathogens, he suggests.

In the past few years, public pressure has persuaded the Chinese government to tackle the country’s growing air pollution problem. But for now the smogs continue. Earlier this month, PM2.5 levels in Beijing rose above 600 micrograms per cubic metre, prompting officials to advise children and elderly people to stay indoors. And in the run-up to the Chinese New Year celebrations last night, the China Meteorological Administration called for a curb on fireworks to avoid unnecessary air pollution. They might have had a point: after a relatively clear day, Beijing’s PM2.5 concentrations spiked at 469 micrograms per cubic metre at around 1 a.m. local time.