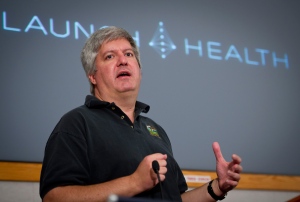 Ron Kalil, a neuroscientist at the University of Wisconsin–Madison, didn’t expect to see his son among the 28,500 attendees at the meeting of the Society for Neuroscience in New Orleans last October. And he wondered why Tom Kalil, deputy director for policy at the White House’s Office of Science and Technology Policy (OSTP), was accompanied by Miyoung Chun, vice-president of science programmes at the Kavli Foundation in Oxnard, California.

Tom Kalil told his father that the Kavli Foundation had wanted his help in bringing nanoscientists together behind an ambitious idea. Ron Kalil says he thought: “Why are you talking about it at a neuroscience meeting?”

He understands now. These two people, neither of them a working scientist, had been quietly pushing into existence the Brain Activity Map (BAM), the largest and most ambitious effort in fundamental biology since the Human Genome Project — and one that would need advances in both nanoscience and neuroscience to achieve its goals.

This is the kind of science — big and bold — that politicians like. President Barack Obama praised brain mapping in his State of the Union address on 12 February. Soon after, Francis Collins, director of the US National Institutes of Health (NIH) in Bethesda, Maryland, which will be the lead agency on the project, talked up the idea in a television appearance.

The Obama administration is expected to provide more details about the initiative this month, possibly in conjunction with the release of the federal 2014 budget request. But already, some scientists are wondering whether the project, a concept less than two years old and still evolving, can win new funding from Congress, or whether it would crowd out projects pitched by individual scientists. “Creative science is bottom-up, not top-down,” says Cori Bargmann, a neurobiologist at the Rockefeller University in New York. “Are we talking about central planning inside the Beltway?”

The idea was born at a meeting of neuroscientists and nanoscientists that Chun helped to convene in September 2011 at the Kavli Royal Society International Centre at Chicheley Hall, an elegant country house in Buckinghamshire, UK. There, a handful of scientists drafted a white paper laying out their ambitions to illuminate what they would soon call the “impenetrable jungles” of brain function, by mapping and stimulating neural circuits with cellular and millisecond-level resolution. Functional magnetic resonance imaging can provide the big picture, and electrodes can trigger single and small groups of neurons, but this project called for the mapping of thousands of neurons simultaneously, using new tools such as nanoprobes and optogenetics, which manipulates neurons using light. Chun suggested sending the paper, which eventually appeared in Neuron (A. P. Alivisatos et al. Neuron 74, 970–974; 2012), to the OSTP.

“Creative science is bottom-up, not top-down.”

Chun, a molecular geneticist known for being extraordinarily persistent, had already been in touch with Tom Kalil, who had been the prime mover behind a major nanotechnology initiative during the Clinton administration. Kalil had urged Chun to bring him “out-of-the-box, great and progressive ideas”, she recalls.

In December 2011, Chun brought the Chicheley Hall group to Washington DC to present its vision to the OSTP. Led by Rafael Yuste, a biologist at Columbia University in New York and co-director of the Kavli Institute for Brain Science, the group at first had modest plans. They would deploy the new tools in simple model organisms — worms, flies and leeches — before graduating to zebrafish, mice and rats.

When the scientists returned to Washington in May 2012, OSTP officials “wanted us to think bigger”, Yuste says. They pushed the group to expand the project to human brains — and to the study of possible interventions for brain disorders.

That goal has some observers cautioning against the selling of a basic-science project as a way to find cures for Alzheimer’s disease and Parkinson’s disease. “Don’t overpromise,” says Arthur Caplan, a medical ethicist at the New York University Langone Medical Center. “The genome mapping I think was worth doing. But it has left many in Congress and some on the industry side saying: ‘where are the goodies?’”

With the genome project, the goal was relatively fixed: a sequence of 3 billion base pairs. But Donald Stein, a neuroscientist at Emory University in Atlanta, Georgia, points out that brain anatomy and chemistry are constantly shifting. Mapping structure and measuring electrical activity at a particular moment doesn’t necessarily mean that answers will “miraculously appear”, he says.

Critics also wonder who will pay for the project at a time when budgets are stretched thin. The NIH has US$545 million in its Common Fund, a flexible source of money for new projects — but last year, all but $30 million of it was tied up in existing projects. The BAM would probably cost several billion dollars over the course of a decade or more. “What motivates people to pursue these big projects is not the belief that they will solve problems,” says Michael Eisen, a biologist at the University of California, Berkeley. “It’s the belief that this is the way to get money.”

However, two other agencies are expected to help support the project: the National Science Foundation and the Department of Defense, which has an interest in treatments for traumatic brain injuries and in mind-controlled prosthetics. And private foundations, such as the Howard Hughes Medical Institute in Chevy Chase, Maryland, have already spent hundreds of millions of dollars on brain-mapping research. Yuste wants to leverage that work, and make BAM a private–public partnership rather than a competition between the government and private funders, as the genome project was. “We are trying to learn from the Human Genome Project, the mistakes they made,” says Yuste.

Whatever becomes of the BAM, one thing is clear: it has a powerful advocate in the Obama administration. Ron Kalil recalls once asking his son what he actually did in the OSTP. His answer was simple: “I’m the make-it-happen guy.”