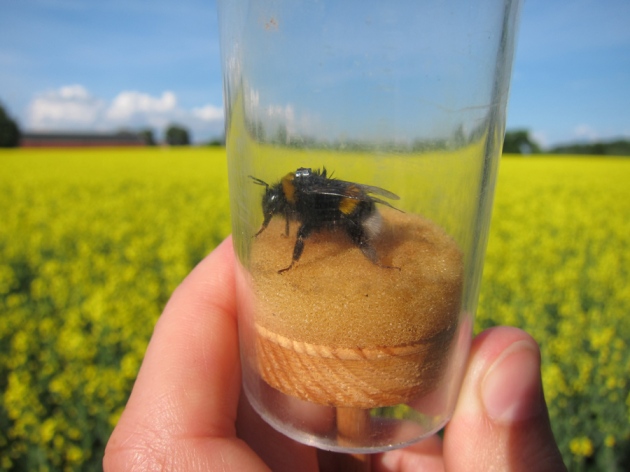 A study in Sweden monitored how bees respond to neonicotinoids in the wild.

The case for restricting a controversial family of insecticides is growing. Two studies published on 22 April in Nature1, 2 address outstanding questions about the threat that the chemicals pose to bees, and come as regulators around the world gear up for a fresh debate on pesticide restrictions.

Reporter Marian Turner finds out about the impact of neonicotinoids on bees.

Many bee populations are in steep decline, with multiple causes identified, including parasites and the loss of food sources. Also blamed are neonicotinoids, a widely used class of insecticides that are often applied to seeds, and find their way into the pollen and nectar of plants. The use on seeds of three — clothianidin, imidacloprid and thiamethoxam — is temporarily banned in the European Union because of concern that they might harm pollinators; the ban is up for review in December. In the United States, there are no such restrictions, but the US Environmental Protection Agency said on 2 April that it was “unlikely” to approve new outdoor neonicotinoid-pesticide uses without new bee data.

So far, the data are mixed. Many studies that link the poor health of bee colonies to the pesticides have been criticized, for example for not using realistic doses. Some defenders of the chemicals have argued that if neonicotinoids are harmful, bees will learn to avoid treated plants.

Geraldine Wright, an insect neuroethologist at Newcastle University, UK, and her colleagues investigated this aspect. They confined honeybees (Apis mellifera) and bumblebees (Bombus terrestris) to boxes and gave them a choice between plain nectar and nectar laced with imidacloprid, thiamethoxam or clothianidin. The researchers found that the bees showed no preference for the plain nectar. In fact, the insects were more likely to choose the nectar containing imidacloprid or thiamethoxam1, although it is not clear whether the preference would occur in the wild.

Wright’s team also analysed the response of the bees’ taste neurons to neonicotinoids, and found that they reacted the same regardless of concentration — indicating that the bees cannot taste the pesticides and that the preference is caused by some other mechanism. Other studies have shown that neonicotinoids activate receptors in bee brains linked to memory and learning.

In contrast to Wright and colleagues’ work, the second paper2 looked at honeybees and wild bees, including bumblebees, in the field. Maj Rundlöf, an ecologist at Lund University in Sweden, and her colleagues analysed eight fields of oilseed rape sown with seeds treated with clothianidin and eight fields sown with untreated seeds across southern Sweden.

She suggests that honeybees have larger colony sizes, which could sustain higher losses of foraging bees before showing overall health effects. But that suggests another problem. “Honeybees are the model organism that is used in toxicity testing for pesticides,” she says. If they are not representative of bees in general, it could explain why more studies have not detected negative effects.

Dave Goulson, a bee researcher at the University of Sussex in Brighton, UK, also suspects that honeybees are more resilient than wild bees to neonicotinoids. Rundlöf’s paper is “probably the best field study done so far”, he says, and avoids many previous problems, such as contaminated controls. “Any reasonable person would have to accept this is a real effect,” he adds.

The debate is heating up. In March, Goulson reanalysed3 data from a 2013 study by the UK Food and Environment Research Agency (see go.nature.com/w9jlti), which had concluded that neonicotinoid pesticides do not harm bees: Goulson found that they do. In the same month, work from the United States found4 that the probable harm from exposure to imidacloprid in seed-treated crops was “negligible” in honeybees, and last year a study5 done in Canada reached a similar conclusion for clothianidin on oilseed rape.

Christopher Connolly, who studies human and bee neuroscience at the University of Dundee, UK, and has published work6 showing that neonicotinoids interfere with neuron function in bumblebees, says that he was already convinced that the pesticides are bad for bees. Now, “the questions need to move to a different level”, to elucidate the mechanisms.