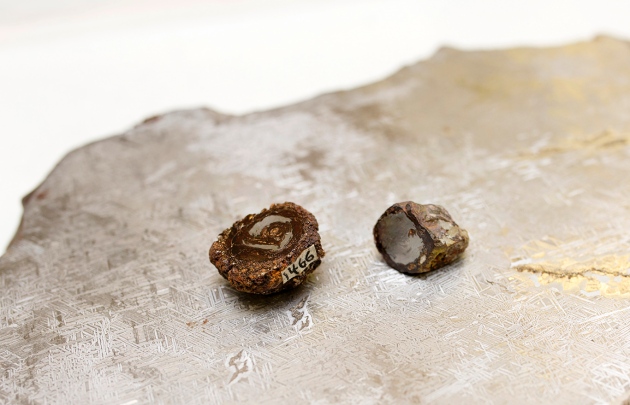 The ancient Hopewell culture made these beads from iron in the meteorite they sit on.

Blackened and irregular, the prehistoric beads found in a centuries-old Illinois grave don’t look like anything special. But the latest analysis1 shows that they were fashioned from an exotic material: the shards of a meteorite that fell to Earth more than 700 kilometres from where the beads were found.

The link between the Anoka meteorite, which landed in central Minnesota, and the Illinois beads confirms that “2,000 years ago, goods and ideas were moved hundreds of miles across eastern North America”, says Timothy McCoy, co-author of the analysis and curator-in-charge of meteorites at the National Museum of Natural History in Washington DC.

The beads were made by people of the Hopewell culture, which flourished in the US Midwest from 100 bc to 400 ad — spreading from its epicentre in Ohio to as far as Mississippi. The culture is known for sprawling ceremonial earthworks and for objects made of non-local materials such as mica. The iron beads were discovered in 1945 in a Hopewell grave near Havana, Illinois, alongside more than 1,000 shell and pearl beads. Together, they indicate that the grave’s occupant was of high rank, says archaeologist Bret Ruby of the Hopewell Culture National Historical Park in Chillicothe, Ohio, who was not involved with the analysis. “You’ve got to open a lot of clams to find 1,000 pearl beads.”

Scientists have known for decades that the grave’s 22 iron-nickel beads came from a meteorite, but they didn’t know which one. Earlier research2, 3 had ruled out the Anoka, an iron-nickel meteorite found in 1961 during the digging of a cesspool near Anoka, Minnesota.

Then a second chunk of the Anoka space rock was unearthed in 1983, and McCoy’s museum bought it. When they examined it under the microscope, McCoy and his colleagues could see that the meteorite contained micrometre-sized granules of iron enriched with nickel, just as the beads do. Analysis by mass spectroscopy and other techniques showed the beads’ chemical composition is a near-perfect match for the Anoka meteorite, the team reports in the Journal of Archaeological Science1. 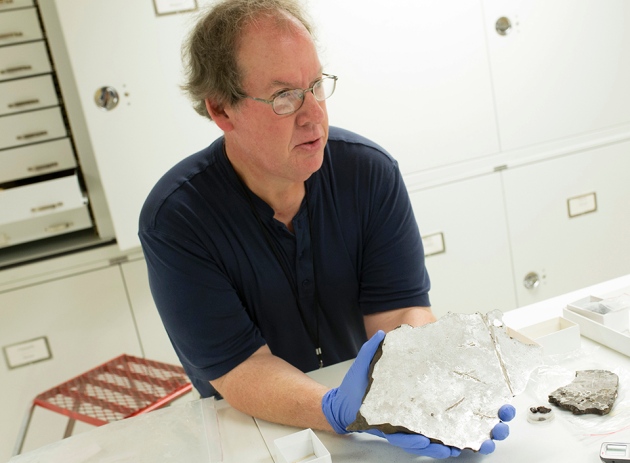 Timothy McCoy, a curator at the National Museum of Natural History in Washington DC, holds a chunk of the Anoka meteorite that was found in 1983.

The team also noticed that the Anoka meteorite is shot through with bands of a brittle mineral called schreibersite. Hopewell artisans could have broken up the lump of iron-nickel along the bands, McCoy says. He made his own bead by repeatedly heating a chunk of the Anoka in a wood fire to some 600 ºC, hammering it flat with a stone and then hammering the sheet into a cylindrical bead. Making the beads “probably took quite a while”, he says. “You wonder how many failed experiments there were.”

The study makes a strong case for the connection between the Anoka meteorite and the beads, says Diane Johnson of the Open University in Milton Keynes, UK, who has studied Egyptian meteoritic artefacts and is not part of McCoy’s team. She notes that the Hopewell techniques are similar to those of the ancient Egyptians, who manufactured almost identically designed tube-shaped beads some 3,000 years earlier.

The analysis is useful because it draws a path from one spot in the Hopewell world to another, says archaeologist Brad Lepper of the Ohio History Connection in Columbus, a non-profit historical and research group. “The more dots on the map we can identify, the clearer the sense of the networks of interaction,” he says.

Lepper and Ruby agree that the Havana Hopewell people probably didn’t engage in anything as mundane as trade to get their chunk of extraterrestrial object. It may have been a gift to cement an alliance, or an offering from religious pilgrims. Perhaps a shaman on a quest found it and transported it, by foot or boat, to Havana. Whatever its path, Ruby says, “it does point to complexity in their society that we tend not to attribute to people living 2,000 years ago” in the Americas.