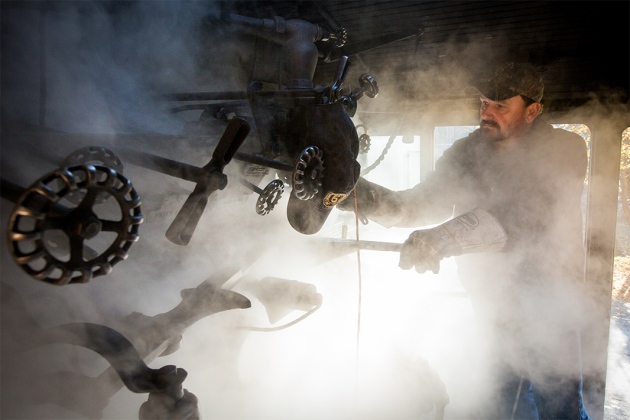 Steam engines convert heat into work; physicists are debating the rules that govern how quantum-level machines could do the same thing.

The young field of quantum thermodynamics, which tries to reconcile quantum theory with the 200-year-old science of heat and entropy, is booming. It’s also causing some heated disputes.

Many physicists hope that rebuilding thermodynamics from the laws of quantum mechanics will help to settle long-debated conundrums. There are practical implications, too. The field could help to resolve whether the concepts of heat and efficiency apply to tiny electronic components and even atom-sized machines.

But despite proliferating approaches — many of which were presented at the Fifth Quantum Thermodynamics Conference this month in Oxford, UK — the field is as contentious as ever. The crux of the issue is whether the fundamental laws that govern heat and energy on large scales also dictate the behaviour of nanoscale systems — or whether new laws are needed.

Interest is growing: this year, more than 100 scientists attended the quantum thermodynamics conference, says co-organizer Vlatko Vedral, a physicist at the University of Oxford. That is double the attendance in previous years.

Such meetings bring together researchers from subfields that use different technical languages, says co-organizer Felix Binder, a theoretician at Nanyang Technological University in Singapore. “There are a lot of barriers being broken between different approaches.”

But a few physicists, such as Peter Hänggi of the University of Augsburg, Germany, caution that some of the work is misguided. “The field is growing rapidly, but also a lot of nonsense is written (and talked) about,” he says.

Physicists have argued over the meaning of the three laws of thermodynamics since they were written in the nineteenth and early twentieth centuries. The laws say that energy cannot be created or destroyed; that the amount of disorder, or entropy, in an isolated system can never decrease; and that it is impossible to cool an object to absolute zero. But thermo-dynamics is paradoxical. The second law, which also puts limits on how efficiently heat can be converted into work — as happens in a steam engine — is particularly controversial.

The law says that the production of disorder is irreversible. But some physicists argue that at the microscopic level, this seems to conflict with the laws of mechanics — be they those of Newton or of quantum physics. Mechanical laws, say these researchers, prescribe that all processes can be reversed.

“This has always been a bit of a dirty business.”

Researchers have come up with different approaches to solving this conundrum, but none has satisfied everyone. “This has always been a bit of a dirty business,” says Christian Gogolin, a physicist at the Institute of Photonic Sciences in Castelldefels, Spain.

Gogolin’s work involves taking statistical mechanics, in which quantities such as temperature or heat are averaged properties of systems made of many particles, and developing a quantum version of it. Some physicists maintain that this statistical-mechanics approach suggests that quantities such as entropy or heat depend on the information an observer possesses. In particular, an all-seeing, ‘godlike’ being could know the positions and motions of each particle and calculate their evolution, and this level of order would be in the eye of the beholder.

This approach has been revived in recent years, as many physicists have come to regard information as something quantifiable, and with physical significance.

Statistical mechanics is even murkier in systems made of relatively few particles and governed by quantum laws. For example, if the tendency towards disorder is a purely statistical phenomenon, it might in principle not apply to a single molecule. Yet in the past decade, theorists have suggested that quantum systems tend to reach and maintain a state of equilibrium — or maximum disorder — even when they have just a handful of components. Experiments confirmed this with small numbers of atoms trapped by laser light in a vacuum1.

And in a 2011 theory paper in Nature, Vedral and his collaborators showed that quantum correlations — the ability of particles to share an ‘entangled’ quantum state when far apart — can be harnessed to produce mechanical work2.

More recently, physicists have made progress with the third law. In a paper published on 14 March in Nature Communications3, Lluis Masanes and Jonathan Oppenheim at University College London showed that the laws of quantum mechanics limit how fast heat can be extracted from an object, and that reaching absolute zero would take an infinite amount of time. Their work seems to confirm that the third law emerges from quantum mechanics.

A more radical proposal, by Oxford theoretical physicists Chiara Marletto and David Deutsch, suggests a set of principles that all physics theories have to satisfy, a sort of a ‘theory of everything’ from which laws such as quantum mechanics should follow. And in a 2016 preprint4, Marletto sketched out how this set of meta-laws leads to a redefiniton of thermodynamic concepts in terms of rules that physical transformations have to obey.

Whatever the outcome of these debates, they may have implications for future technologies. Physicists have made ‘quantum heat engines’ —  that can turn heat into work at the quantum level5. Applications such as quantum computing are moving from the theoretical to the real world, so understanding thermodynamics on a tiny scale could be crucial. “You need to design algorithms that are not just faster,” says Renato Renner at the Swiss Federal Institute of Technology Zurich, and a co-author of the 2011 Nature paper, “but also thermodynamically optimized.”

An earlier version of this story failed to give the full name and affiliation of Renato Renner, who is quoted at the end of the article.