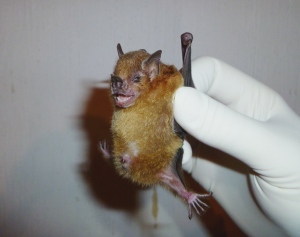 Little yellow-shouldered bats in Guatemala have been found to harbour a strain of influenza virus.

Fruit bats in Guatemala are hosting a novel subtype of influenza A virus, according to a study published today in the Proceedings of the National Academy of Sciences.

The virus — designated H17 — appears to have diverged from known influenza viruses long ago, shedding light on their evolution. Therefore, it seems to pose no immediate threat to humans. However, it is similar enough to other subtypes that genetic exchange with them could pose a risk. “We can’t say don’t worry about it, nor can we say it’s not dangerous. We just don’t know yet,” says study co-author Ruben Donis, chief of molecular virology and vaccines in the influenza division at the Centers for Disease Control and Prevention (CDC) in Atlanta, Georgia.

Donis and his colleagues are now testing bats in South America, Africa and Asia to document the geographical distribution of influenza — the first step towards determining whether bats are a reservoir behind outbreaks in humans.

“We are far away from speculating on any pandemic potential of this virus, but finding this ancient influenza subtype stresses again that bats are an important source of animal viruses," says Ab Osterhaus, head of virology at Erasmus Medical Center in Rotterdam, the Netherlands, who was not involved in the work.

Bats have come in for scrutiny in recent years after being linked to the emergence of Ebola virus, severe acute respiratory syndrome (SARS) and nipah virus. “With more than 1,200 known species, bats are the second-largest mammal group, so it’s not surprising that they carry a large diversity of viruses,” says Jon Epstein, a veterinary epidemiologist at EcoHealth Alliance in New York. “Finding older lineages of influenza in bats doesn’t necessarily increase the risk of influenza emerging into human populations, but it does help us understand the diversity of flu viruses in nature and how genes may be swapped between strains and species.”

Donis and his colleagues began developing molecular probes to detect viruses about eight years ago. At the CDC Field Detection Center in Guatemala, they used the probes to first screen for the presence of rabies virus in bats in 2009 and 2010. Then the samples were screened for other viruses, including influenza. Of 316 bats sampled from 21 species across eight locations, three little yellow-shouldered bats (Sturnira lilium) tested positive for H17.

“This study highlights the power of using generic PCR probes to broadly screen for and discover new viruses in new hosts — something that can be done at labs throughout the world,” says Epstein.

Ideally, Osterhaus says, the community will create an inventory of viruses identified in bat species to better determine the potential for viral spread to other mammals, including humans. “It is unfortunate that we are being blocked at the moment from publishing data on transmissibility of an avian influenza virus, which is crucial information we need for not just influenza viruses but for all emerging viruses,” he adds.

What is not yet clear is how influenza is transmitted between the bats. “We think the intestinal tract, where we found the highest concentration of the virus, is the target organ — suggesting infection may be the result of oral–faecal transmission,” says Donis.

In many ways, bats are perfect organisms to sustain viral transmission. They are social, migratory animals that are found in large numbers around the world. Several teams, including Osterhaus’s, are including bats in disease surveys. “If you want to go into virus discovery, start by looking at bats,” says Osterhaus.

But what really drives disease emergence, says Epstein, is how humans interact with wildlife — for example, by expanding agriculture and decreasing wildlife habitat.

Donis acknowledges that surveillance is costly and time-consuming, but argues that we should increase efforts to track both known and emerging pathogens. “The real questions are ‘where else could we find influenza?’ and 'have we looked carefully everywhere?'” he says.