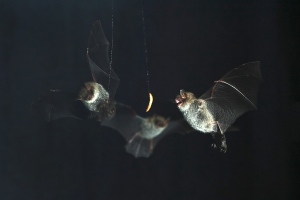 Human eyes, set as they are in front-facing sockets, give us a limited angle of view: we see what is directly in front of us, with only a few degrees of peripheral vision. But bats can broaden and narrow their 'visual field' by modulating the frequency of the squeaks they use to navigate and find prey, researchers in Denmark suggest today in Nature1.

Bats find their way through the night by emitting sonar signals and using the echoes that return to them to create a map of their surroundings — a process called echolocation. Researchers have long known that small bats emit higher-frequency squeaks than larger bats, and most assumed that the difference arises because the smaller animals must catch smaller insects, from which low-frequency sound waves with long wavelengths do not reflect well.

That didn't sound right to Annemarie Surlykke, a neurobiologist who studies bat echolocation at the University of Southern Denmark in Odense. “When you look at the actual frequencies, small bats would be able to detect even the smallest prey they take with a much lower frequency,” she says. “So there must be another reason.”

Surlykke and her colleagues decided to test the hypothesis by studying six related species of bat that varied in size. They captured the animals in the wild and set them loose in a flight room — a pitch-dark netted corridor 2.5 metres high, 4.8 metres wide and 7 metres long, rigged on all sides with microphones and infrared cameras. “It’s a pretty confined space, so this corresponds to flying close to vegetation,” says Surlykke.

By measuring the time it took for a bat’s echolocation signals to hit different microphones, Surlykke’s team could pinpoint the exact location of the animals in flight. They could then analyse the intensity of each signal, as well as the size of each animal’s mouth, to reconstruct the width of the sound beam.

Under the specific conditions of the flight room, the researchers found, the animals adjusted the frequency of their signals and the openings of their mouths to come up with the same beam width for their echolocation calls — around 37°, no matter the animal's size. In past studies, two species tested in the field used different beam widths depending on whether they were scanning for prey from on high or about to dive in for the capture.

“That means that the small bats, we think now, are not forced to use the high frequency to detect their prey, but to keep the beam narrow,” says Surlykke. A lower-frequency vocalization would broaden the beam, making it hit more objects and increase the noise in the signal, which would make echolocation more difficult. So small species need to use high frequencies simply because their mouths are petite.

Hans-Ulrich Schnitzler, who studies echolocation at the University of Tübingen in Germany, lauds the finding for bringing a previously unconsidered parameter to the discipline. “I really think it opens up a new field,” he says.

However, he thinks that the group’s conclusion is not yet definitive. “It now has to be documented for other species and for flying out in nature — in the open, in the forest, in different habitats,” says Schnitzler.

Surlykke notes that her group examined only bats that echolocate using their mouths. “One of the intriguing questions is how this works in nose-emitting bats,” she says.

The study raises the question of how bats perceive their environment, says Surlykke, and her group plans to look at this too.

“The fact that the beam is constant means the important thing is in the bat’s head — and not in the environment,” says James Simmons, a neurobiologist at Brown University in Providence, Rhode Island. “Ultimately,” he says, “it’s a psychological problem.”