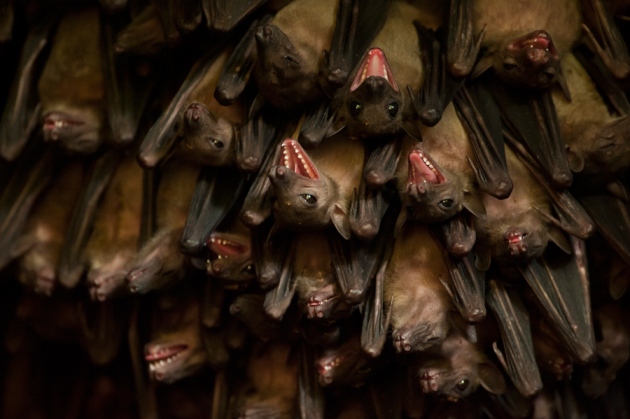 Egyptian fruit bats use a wide repertoire of sounds to claim their territory in their dark, crowded habitats

The high-pitched squeals of the humble bat may be as complex as the calls of dolphins and monkeys, researchers have found. A study published on 22 December in Scientific Reports1 reveals that the fruit bat is one of only a few animals known to direct its calls at specific individuals in a colony, and suggests that information in the calls of many social animals may be more detailed than was previously thought.

Bats are noisy creatures, especially in their crowded caves, where they make calls to their neighbours. “If you go into a fruit-bat cave, you hear a cacophony,” says Yossi Yovel, a neuroecologist at Tel Aviv University in Israel who led the study.

Until now, it has been difficult to separate this noise into distinct sounds, or to determine what prompted the individual to make a particular call. “Animals make sounds for a reason,” says Whitlow Au, a marine-bioacoustics scientist at the University of Hawaii at Manoa. “Most of the time, we don’t quite understand those reasons.”

To find out what bats are talking about, Yovel and his colleagues monitored 22 captive Egyptian fruit bats (Rousettus aegyptiacus) around the clock for 75 days. They modified a voice-recognition program to analyse approximately 15,000 vocalizations collected during this time. The program was able to tie specific sounds to different social interactions captured by video, such as when two bats fought over food.

Using this tool, the researchers were able to classify more than 60% of the bats’ sounds into four contexts: squabbling over food, jostling over position in their sleeping cluster, protesting over mating attempts and arguing when perched in close proximity to each other.

The algorithm allowed researchers to identify which bat was making the sound more than 70% of the time, as well as which bat was being addressed about half the time. The team found that the animals made slightly different sounds when communicating with different individuals. This was especially true when a bat addressed another of the opposite sex — perhaps in a similar way, the authors say, to when humans use different tones of voice for different listeners. Only a few other species, such as dolphins and some monkeys, are known to specifically address other individuals rather than to broadcast generalized sounds, such as alarm calls.

The bats seemed to be particularly vocal when annoyed with other bats. They might be communicating such things as ‘Hey, get out of my way!’ or ‘Stop, that’s my food!’, suggests Sonja Vernes, a neurogeneticist and bat researcher at the Max Planck Institute for Psycholinguistics in Nijmegen, the Netherlands, who was not involved in the study.

Bats may have a lot more to tell us, Yovel says. Most communication research has been performed on songbirds, because the vocalizations of dolphins, whales and monkeys are more difficult to study. But in the past few years, scientists have begun adopting bats as another model organism for this research. “The bat vocal communication field is like where the songbird field was 60 years ago,” says Michael Yartsev, a neurobiologist at the University of California, Berkeley, who studies neural circuits in bats.

Yovel says his group is now trying to determine how well bats respond to the different types of call. The team's findings, he says, suggest that communication researchers should look deeper into the context when analysing the sounds of animals — their everyday chit-chat might be much more sophisticated than it seems.