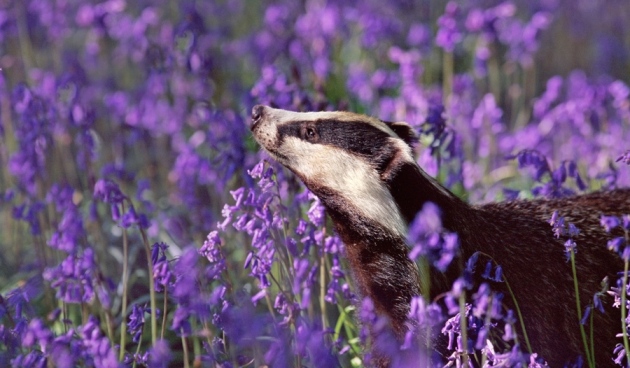 Badgers face the death penalty for contributing to high rates of bovine tuberculosis.

England’s West Country is a bucolic landscape of winding country lanes and gently rolling pastures. But as autumn darkens into winter, a war, complete with armed marksmen and camouflaged saboteurs, is about to erupt from the hedgerows. Both sides claim science as their ally.

At issue is the badger (Meles meles), one of the largest predators left in the British Isles after millennia of human occupation. The furry creature is an iconic and beloved species — but to farmers, it is a menace that infects their cattle with bovine tuberculosis (TB). The disease, caused by the bacterium Mycobacterium bovis, could cost the government £1 billion (US$1.6 billion) in control measures and compensation over the next decade. As early as this week, government-sanctioned hunters will begin a pilot effort to cull the badgers. Animal-rights activists — a potent force in Britain — are furious, and are planning protests, milk boycotts and sabotage of the culls.

Battles over wildlife management are hardly unique to England. In the United States, environmentalists and ranchers spar over wolves, which have been reintroduced to many states. In Western Australia, the government has proposed a cull of coastal sharks in response to a swimmer’s death, angering green groups. But the badger question stands out in one distinctive way: it has been systematically studied for more than a decade by scientists at some of England’s top universities.

Badgers do carry TB and can infect cows through direct and indirect contact, and years of research and tens of millions of pounds have gone into studying whether killing them would protect herds. During a 9-year trial1, scientists tramped through hundreds of square kilometres of pastureland, probing dens, collecting road kill and performing autopsies on more than a thousand badgers to check for TB. The results are discussed at length in a 287-page UK government study and in numerous scientific papers, including several in Nature2, 3.

So is the government’s decision to let farmers shoot badgers scientifically sound? No, says John Krebs, a zoologist, member of the House of Lords, and principal of Jesus College at the University of Oxford, who recommended running the 9-year study. “They went against the science on political grounds.”

Yes, counters David King, a chemist and director of the Smith School of Enterprise and the Environment, also at Oxford. “The government’s got it right,” he says. When King was the former Labour government’s chief scientific adviser in the 1990s he supported culling, and commissioned a separate study that ended up endorsing it4. The schism reveals an uneasy truth about the badger issue: science doesn’t give a clear answer about what to do.

Here are the facts. For more than a decade, bovine TB has been on the rise in Britain (see ‘Bovine burden’). To control the disease, which can spread to humans through contaminated milk, cattle are routinely screened and infected animals are destroyed. And, uncomfortable as it is for animal-lovers, killing large numbers of badgers does help to reduce levels of bovine TB. 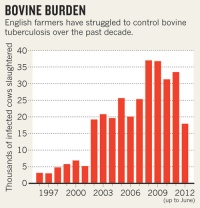 The trial backed by Krebs (officially known as the Randomised Badger Culling Trial, or RBCT) showed a 23% reduction in bovine TB in the area of the cull, although the areas immediately outside the trial area saw an increase of roughly 25% — a consequence of badgers extending their normal range. Reviewing the data, scientists decided in 2011 that culling about 70% of the badgers in larger areas would lead to an overall reduction in bovine TB of up to 16%.

There is little disagreement among scientists about the 16% figure, says Christl Donnelly, a statistician at Imperial College London, who has devoted years to analysing the RBCT data. But there is plenty of debate about whether that’s enough to justify a kill. Sixteen per cent “doesn’t sound terribly meaningful to me”, says Jack Reedy, spokesman for the Badger Trust, a non-profit organization based in East Grinstead, UK, that opposes the killing of badgers. He adds that controlling cattle movements and increasing TB screening on farms would have a greater impact. Adam Quinney, a beef farmer and vice-president of the National Farmers Union in Stoneleigh, which is lobbying for the cull, disagrees. “If I said to you, ‘I’m going to give you an increase in income of 16%,’ would you say that was significant?”

In July 2011, the Department for Environment, Food and Rural Affairs (DEFRA) laid out a plan for bovine TB eradication in England. The plan included increased surveillance and security measures on farms, as well as what the government described as a “science-led policy” of killing badgers in areas of high bovine TB. The plan reflects the reality that “this little micro-organism is really getting the better of us”, says Ian Boyd, DEFRA’s chief scientific adviser, who supports the cull. Politicians do not expect that the cull alone will eradicate bovine TB, but they hope that it will at least help to stabilize infection rates. Boyd insists that the new policy is rooted in the science of the RBCT.

Test culls will begin in Somerset and Gloucestershire, two of the most heavily infected regions in the country. The cull areas will be larger than those in the original trial, and will use physical boundaries, such as rivers and roads, to prevent infected badgers from roaming in or out of the cull zone. For many scientists, however, the new cull seems too distant from the RBCT to deserve the title of ‘science-led’ policy. The 70% reduction is a particular sticking point, as it is virtually impossible to determine badger populations in advance of actually killing them. On 14 October, 31 academics warned in a letter to The Observer newspaper that if the targets are missed, then levels of bovine TB could actually increase, because infected badgers will begin to roam more widely. “They say that their policy will be science-based but that’s simply not true,” says Krebs, who signed the letter. “They feel they have to do something, and the easiest something to do is to shoot badgers.”

Other parts of the British Isles have already taken action. The Irish have used targeted snare-trapping to all but eliminate badgers from selected areas. That system would be more affordable but it is considered unethical in England. In Wales, officials have begun an expensive campaign to immunize badgers against TB. Both techniques depend on the peculiarities of local geography and badger populations, but they reflect the range of approaches that can be supported by the scientific evidence.

Policy-makers, meanwhile, are frustrated. “Politicians feel that the scientists have let them down,” says Phil Willis, a Liberal Democrat and member of the House of Lords Science and Technology Committee. “They’ve not come with clarity, not just in terms of the science but in terms of the solution.” Willis says that based on his understanding of the data, the government policy is unlikely to work.

As both farmers and protesters gird themselves, Donnelly acknowledges that science has given few straight answers. But, she says, it has helped to shift the debate: farmers now admit that tougher biosecurity standards will be instrumental in controlling bovine TB, and conservationists concede that badgers are a major reservoir for the disease. “They may not be singing from the same hymn sheet,” she says, “but at least they’re looking at the same data table.”