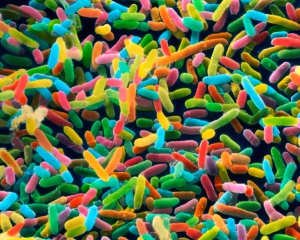 The common gut bacterium Escherichia coli typically takes about 20 minutes to duplicate itself in good conditions. Could it do it any faster? A little, but not much, says biological physicist Jeremy England at the Massachusetts Institute of Technology in Cambridge. In a preprint1, he estimates that bacteria are impressively close — within a factor of two or three — to the limiting efficiency of replication set by the laws of physics.

“It is heartening to learn this”, says Gerald Joyce, a chemist at the Scripps Research Institute in La Jolla, California, who develops synthetic replicating molecules based on RNA. “I suppose I should take some comfort that our primitive RNA-based self-replicator apparently operates even closer to the thermodynamic lower bound”, he adds.

At the root of England’s work is a puzzling question: how do living systems seem to defy the Second Law of Thermodynamics by sustaining order instead of falling apart into entropic chaos?

Life doesn’t really defy the second law because it produces entropy, in the form of heat, to compensate for its own orderliness — that is why we are warmer than our surroundings. England set out to make this picture rigorous by estimating the amount of heat that must unavoidably be produced when a living organism replicates. In other words, how efficient can replication be while still respecting the second law?

To attack this problem, England uses the concepts of statistical mechanics, which relate different arrangements of a set of basic constituents, such as atoms or molecules, to the probabilities of their occurring. The second law follows from the fact that there are many more disorderly arrangements of such constituents than orderly ones, so that these are far more likely to be the outcome of the particles’ movements and interactions.

The question is: what is the cheapest way, in terms of the energy involved, of going from one bacterium to two? To get there, the raw ingredients of the second cell have to be put in order. To respect the second law, that order must be 'paid for' by pumping heat into the surroundings to increase their entropy.

The minimum amount of heat that would 'just pay' for this order can be determined by working out how much ordering is needed to turn raw ingredients — amino acids and so forth — into a cell. This in turn can be estimated by considering the reverse process: the likelihood that the second cell could fall apart spontaneously into its components.

But as England says, “there are many ways of starting with two cells and ending up with one", and not all are equally likely. The challenge, he explains, is to figure out "what class of paths should dominate that process”.

The problem is precisely those “many ways”. “You can drive yourself nuts trying to think of everything,” England says. But he considered the most general reversal route: if, by chance, all the molecules in the replicated bacteria happened to disintegrate. That is, of course, immensely unlikely. But by figuring out exactly how unlikely, England can place a rough limit on how reversible replication is, and thus on its minimum energy cost.

By plugging some numbers into equations describing the likelihood of a replication event being reversed — how long on average the chemical bonds holding proteins together will last, say, and how many such bonds there are in a bacterium — England estimates that the minimum amount of heat a bacterium must generate to replicate is a little more than a third of the amount a real E. coli cell generates. That’s impressive: if the cells were only twice as efficient, they’d be approaching the maximum possible efficiency.

England cautions that his estimate should be treated as a “plausibility argument” rather than a proof. “The weakest point in my argument is the assumption that we know what the ‘most likely very unlikely path’ for spontaneous disintegration of a bacterium is,” he admits. “We’re talking about things that simply never happen, so we can’t have much intuition about them.”

It’s precisely this that troubles Joyce, who compares the calculation with the joke about a physicist trying to solve a problem in dairy farming by considering a spherical cow. “As an experimentalist, it is hard for me relate to this ‘spherical cow’ treatment of a self-replicating system,” Joyce says. “Here E. coli seems to be nothing more than the equivalent of its dry weight in proteins.”

England says that we can hardly expect bacteria to do much better than they do already, given that they have to cope with many different environments and so can’t be optimized for any particular one. But if we want to engineer a bacterium for a highly specialized task using synthetic biology, he says, then there is room for improvement. Such a modified E. coli could be at least twice as efficient at replicating, which means that a colony could grow much faster. That could be useful in biotechnology. “We may be able to build self-replicators that grow much more rapidly than the ones we're currently aware of,” he says.