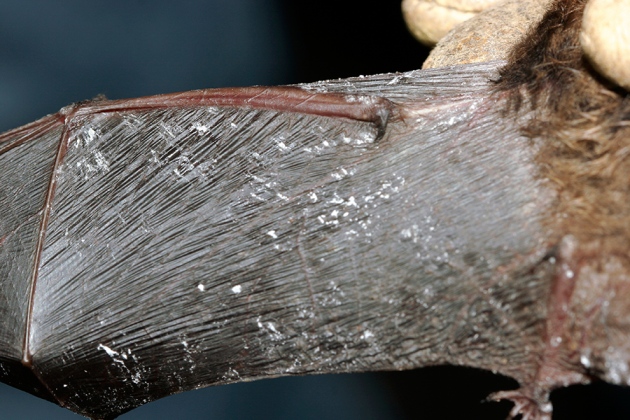 The fungus that causes white-nose syndrome eats into bats’ wings.

Kilpatrick, a disease ecologist at the University of California, Santa Cruz (UCSC), and his colleagues chose the mines because they lay right in the path of the fungus, which has spread from Europe through 26 US states and 5 Canadian provinces since January 2007.

Although researchers are currently helpless to halt the spread of the fungus, there is reason for cautious optimism: treatments could soon be available that will help the bats to keep the infection at bay, for a season at least.

The goal, says Chris Cornelison, a micro-biologist at Georgia State University in Atlanta, is to ensure that when researchers find long-term solutions for the disease, “there are still bats to treat”.

The fungus (Pseudogymnoascus destructans) grows on bats while they hibernate in winter, digging into their noses, ears and wings. Animals that survive until spring usually clear the infection as their bodies warm; some species do it year after year. But the pathogen causes other species to repeatedly rouse from hibernation, which burns up fat reserves and can cause the animals to starve to death. Some even flee their roosts in a futile search for food.

“They come out of caves in the winter, and they try to get into people’s homes or churches or schools,” says Jeremy Coleman, national coordinator for white-nose-syndrome research at the US Fish and Wildlife Service in Hadley, Massachusetts. “They’re dead and dying on the ground.”

Kilpatrick and his colleagues have discovered that a bacterium found on bats’ wings may help them to combat infection. In April, the scientists published a paper in PLoS ONE showing that two strains of the bacterium Pseudomonas fluorescens kill white-nose fungus in cell culture (J. R. Hoyt et al. PLoS ONE 10, e0121329; 2015). Last winter, the researchers applied the treatment to bats in the lab. They have not released their results, but Kilpatrick hopes to test the bacteria in the wild soon.

Others are examining whether volatile organic compounds produced by Rhodococcus bacteria, which are found in soils, can kill white-nose spores. During a field trial in Missouri last winter, Cornelison and his colleagues treated bats with such compounds for 48 hours before returning the caged animals to their cave for 4 months to finish hibernating. On 19 May, the researchers released the bats that were free of disease — prompting media coverage of a potential ‘cure’.

Cornelison cautions against such celebration. His team is still analysing the data from the trial, and has not revealed how many bats were treated and released or how the controls fared. And even if this or the bacterial treatments are effective, they will be only short-term solutions. The fungus lingers on cave walls during the summer, and bats do not seem to develop immunity to it — so researchers would need to treat the animals every year to keep them from getting sick.

Long-lasting solutions remain elusive. Some scientists hope to develop a vaccine, but have yet to work out how to trigger the animals’ immune systems to destroy the pathogen, says Ken Field, an ecoimmunologist at Bucknell University in Lewisburg, Pennsylvania. Bats naturally produce antibodies to the fungus, but there is no evidence that these can help them to survive.

Other researchers are promoting a more radical long-term solution: altering airflow in mines where bats hibernate to make the sites less hospitable to the white-nose fungus. Places where bats survive infection tend to be relatively cool and dry. By opening new routes to the outside, researchers could cool and dehumidify the air in mines that are too warm and wet.

There is a chance that manipulating airflow could drive bats to abandon the habitat, says Kate Langwig, an ecologist at the UCSC. But she argues that it is worth a try, because at some sites the white-nose fungus kills about 90% of the bats present. In the first 5 years that it was present in the United States, the pathogen claimed more than 5.5 million animals.

In the meantime, the United States and Canada are developing and implementing strategies to coordinate work by scientists and by local and national governments — ranging from laboratory and field studies to efforts to prevent people from inadvertently spreading the fungus to pristine caves.

The plight of the bats is “stark — it’s demoralizing”, says Winifred Frick, an ecologist at the UCSC. “But I have hope in terms of the amount of creative energy and sense of dedication that people are putting forth on this problem. If there are solutions, we will find them.”