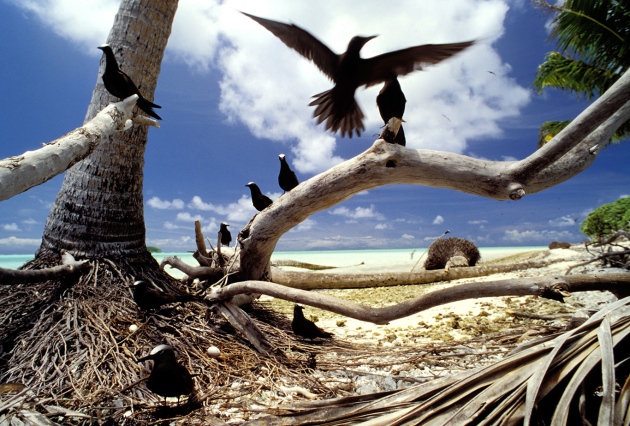 A tiny island in the Tetiaroa atoll near Tahiti is now nearly mosquito-free.

The South Pacific islands have long drawn sailors and tourists seeking paradise on Earth, but biologists are now trying to make the region even more alluring. A biomedical lab in Tahiti has succeeded in nearly eradicating mosquitoes from a tiny nearby island, and researchers are gearing up to eliminate the pests from a larger island that is permanently inhabited by people.

The eventual goal is to cut off transmission routes for mosquito-borne diseases such as dengue, chikungunya and Zika, which plague the Pacific. Researchers also hope that reducing the mosquito burden will help populations of local birds. On other islands, such as Hawaii, avian malaria spread by mosquitoes can devastate bird populations.

The mosquito problem could be solved in the Society Islands — a part of French Polynesia that includes Tahiti, Moorea, Bora Bora, Huahine and Raiatea — within ten years, says Hervé Bossin, an entomologist at the mosquito lab of the Louis Malardé Institute in Paea, Tahiti, and the project’s lead scientist.

He and his team plan to do this using a technique that infects mosquitoes with a specific strain of a bacterium called Wolbachia. About 65% of insects around the world carry Wolbachia, but the strains vary. If mosquitoes with different strains mate, the resulting eggs develop incorrectly and don’t hatch. If there are enough of these doomed pairings, an area’s mosquito population usually dies out.

But first, scientists must sort the males from the females. In a small, tidy lab on Tahiti’s east coast, nestled among coconut palms and fragrant white tiare blossoms, senior technician Michel Cheong Sang pours water between two glass plates set at an angle, washing several dozen larvae of Aedes polynesiensis mosquitoes down between them. The larger females get stuck about halfway down. The smaller males descend a bit farther, forming a dark, wriggling band behind the glass. The low-tech method sorts more than 99% of the larvae correctly, says Bossin.

All the larvae are infected with a particular strain of Wolbachia — taken from a related mosquito species, Aedes reversi — that is not naturally present in French Polynesia. Only the males will be released in target areas to mate with wild female mosquitoes. Researchers are working at a total of five sites, most located at luxury hotel properties around the Society Islands (see ‘The Wolbachia approach’). 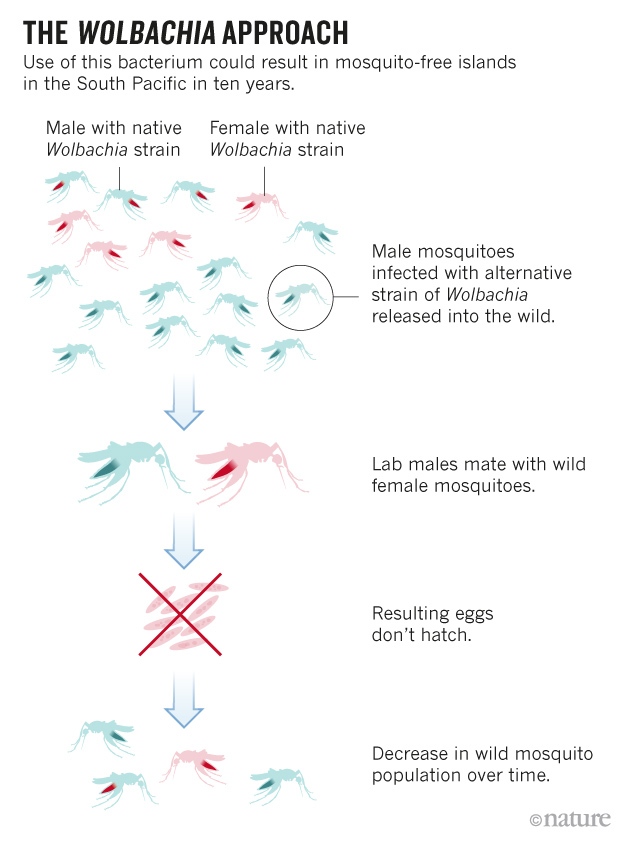 Right now, the Wolbachia method is the gold standard for ridding islands of mosquitoes, says Zhiyong Xi, a medical entomologist at Michigan State University in East Lansing. His group has used the technique to nearly eliminate Aedes albopictus mosquitoes from two small, inhabited islands in Guangzhou, China. “I predict that the technology will be used in large scale in five years and we will see large tropical countries free of mosquitoes in less than ten years,” Xi says. Researchers have run similar trials in Brazil and in the United States, where three states saw populations of wild A. albopictus reduce by 70% over three years.

The Wolbachia approach is based on a naturally occurring bacterium, and has drawn less opposition than experimental methods that use genetically modified mosquitoes. Still, Bossin and other researchers are following the progress of genome-based techniques, because they could eventually become faster and cheaper to use than the bacterial method.

Bossin and his team started their first large-scale study in 2015, on a tiny island in the atoll of Tetiaroa. The atoll, once owned by film star Marlon Brando, is a 20-minute flight from Tahiti. The researchers’ monitoring efforts currently find about one female per trap per week. Last year, earlier in the project, they found one per trap per day.

The Tetiaroa pilot study had funding from the governments of French Polynesia and France, and logistical support from the small resort on the atoll. The hotels where Bossin is running trials this year are also funding his work.

The researchers are ramping up preparations to eradicate mosquitoes from an entire permanently inhabited island. They plan to announce the exact location soon, and hope to release Wolbachia-infected male mosquitoes in two years. They already have the funds to expand their lab to handle the necessary increase in larvae production. If the team is successful, the island could become the first in the South Pacific to be cleared of mosquitoes.

Bossin thinks the incompatibility technique could be scaled up to eradicate the biting insects from islands across the Pacific — perhaps even from continents. “The only limit is the size of your production facility,” he says.

Giovanni Benelli, an entomologist at the University of Pisa in Italy, is less sanguine about the prospect of continental eradication. And he wouldn’t want to see all mosquitoes disappear in any case. “The mosquito’s ecological role is still important,” he says. Some aquatic animals eat mosquito larvae, and adult mosquitoes help to regulate mammal and bird populations by transmitting diseases among them, Benelli says.